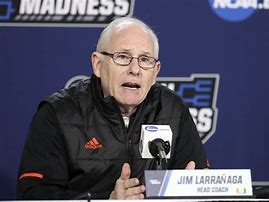 I’ve had the privilege of teaching students at three universities, two of which played in NCAA Sweet 16 games last night.   One was a school that has eleven national championships to their credit and was in last year’s Final Four.

The other won last night and made history.

The University of Miami Hurricanes did not even field a men’s basketball team between 1971 and 1985.  While its football team rose to national prominence in the late ’80s and early ’90s it became the foundation for the original Big East conference, a basketball-centric conference, to begin competition in football.  It dominated the conference in football, but in basketball it was an afterthought, largely non-competitive for most of the ’90s.  Under Perry Clark, the oughts began more promisingly, even winning the conference tournament in 2000, but along with other football-first Big East schools like Syracuse and Pittsburgh they eventually became attractive to the Atlantic Coast Conference, and in 2004 they all migrated to the ACC.  With the likes of North Carolina and Duke now as regular season competition, let alone SU and Pitt, once again basketball had a secondary place on the Coral Gables pecking order.

But this year, particularly this month, some magic has happened.  A gritty team, spearheaded by a miracle worker named Jim Larranaga, has found a rhythm and has capitalized on some spirited play to reach the Elite Eight for the first time in the school’s history. Against an equally unlikely double-digit seed survivor, Iowa State, the U took full advantage of a late second half surge to advance with a 70-56 win last night.  The aptly named Kameron McGusty took flight in the Windy City, leading the way with 27 points.

The U has had some prior success in the ACC, winning the regular season conference title in 2013 with an improbable run that peaked with a rout of Duke and a win over North Carolina in the championship game.  Larranaga has had his own history of tournament success, taking a George Mason team that was an 11 seed to the 2006 Final Four.  To date, that team has been the only double-digit seed to advance to the Final Four.  On Sunday, against the sole remaining #1 seed that remains in this year’s Dance, Kansas, the ‘Canes can become the sport’s–and his personal–second such representative.

While there has been a following for the basketball team to be sure–the Larranaga Lawn is a prominent outdoor quad where overflow crowds have on occasion partied during sold-out games, particularly during that 2012-13 run–basketball has never come close to football for passion and prominence.  My students didn’t even know who their team was playing when I taught them during the regular season even though they had friends on the team.  Miami, like Los Angeles, is a city where there’s a lot to do other than watch sports year-round, and you have to earn your right to get attention in that environment.  I’m strongly suspecting this qualifies.

Consider this:  of the eight teams that will still be playing as of today, the ACC is the home of three of them.  The ‘Canes are the only one not based in North Carolina.  All three could indeed be in the Final Four, setting up a possibility that only occurred previously in 1985, when St. John’s, Georgetown and Villanova of the Big East represented 75% of that season’s finalists.  That year, the lowest seeded of all of them, Villanova, won it all.  In a tournament where a 15 seed (congratulations again, St. Peter’s!!) is still alive,

Oh, and that other school I once taught for that also played last night?  Well, UCLA’s dreams for back-to-back Final Fours for the first time since the ’70s died at the hands of North Carolina in a 73-66 loss that saw a late run by the Tar Heels and a hot hand by Caleb Love coincide with twelve consecutive missed shots by the Bruins’ array of Js (Jaime Jaquez Jr and Johnny Juzang) put yet another #8 seed from the ACC into the final octet of survivors–just like 1985.

Thre’s currently a curfew in downtown Miami Beach that has been imposed after last week’s spring break-induced violence.  Should the ‘Canes beat Rock Chalk tomorrow, I’m fairly sure once the curfew gets lifted at midnight those clubs and the fair-weather hotties will be rocking green, orange and white.  If worse comes to worse, they can always head south and west and take the frolicking onto Larranaga Lawn.