As the reality of a World Series between the Philadelphia Phillies and Houston Astros sets in while we wait for the pre-ordained scheduling for FOX to kick in as weather gets colder (yeah, Philadelphia, bundle up!) there’s a sense of dread that this matchup simply isn’t good for anybody.

Houston became only the third team in the modern era to sweep their first seven post-season games in a given year, finishing off the Yankees in tenacious and convincing fashion Sunday night.  Philadelphia has ridden an amazing late-season push that had them sneak into the final (and previously non-existent, save for 2020) third Wild Card slot and have now knocked off both Atlanta and San Diego with exciting clinching victories at home, losing only twice themselves.  That said, few pundits give Philly a puncher’s chance against Houston, and without New York or Los Angeles in the mix those drooling, climate-denying FOX executives are fearing ratings will be depressed.

I’d encourage those doubters to not only look at recent history to reconsider their foregone conclusions, but also at the history these two teams have together in the post-season.  No, not a World Series, but the 1980 National League Championship Series.

Consider the context that even got them there.  The Phillies didn’t clinch their division title until the last game of the year.  They squared off in Montreal against the Expos for a three-game series on the season’s final weekend, tied with an expansion team yet to go to any post-season.  After winning the opener, Mike Schmidt hit a two-run blast in the 10th inning to give the Phils a 6-4 win. (Booknote those facts, BTW), 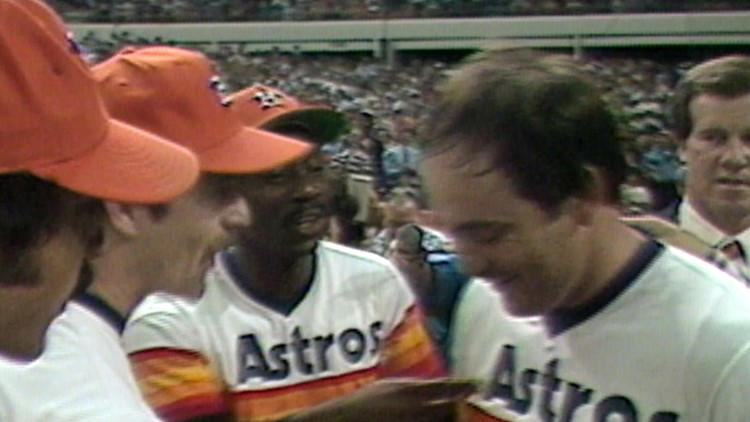 Houston also was a road team seeking to clinch their title against their second-place chaser when they went into Los Angeles to take on the Dodgers starting out three up with three to play.  One win would clinch.  Instead, the Dodgers swept the three regular season games, forcing a one-game playoff that essentially extended the series in LA to four games.  And while technically being part of the regular season, it was the only time besides the upcoming series that teams destined to play in a World Series faced off in a game of consequence beyond game 162.   And for the Astros, who had never won even a division title in their history, there was lots more at stake,

Fortunately for them, the Dodgers had depleted their pitching staff just to force the playoff, and turned to recent acquisition Dave Goltz to start.  Goltz had been a disappointment since coming over from Minnesota as a free agent, but he drew the start against the Astros’ wily veteran Joe Niekro.  I can still hear my dad cursing Tom Lasorda as Goltz imploded early and, when it really mattered, the Astros finally got their win in LA, and moved on to the NLCS.

After a somewhat normal first game where Steve Carlton pitched a 3-1 victory in front of a Veterans’ Stadium crowd that finally saw their team win for the first time since 1915 (they never won a home game in any of three previous NLCS they competed in), Game 2 went to 10 innings, when the Astros strung a series of hits to score four runs and return to Houston dead even.  And when pinch-hitter Denny Walling drove in Astros’ leader Joe Morgan with a sacrifice fly after Morgan tripled to open the 10th inning, providing the ‘Stros with a thrilling 1-0 win, Houston now was a game away from a home celebration and a World Series.

Instead, the Phils once again won extra inning games on the road, not once, but twice.  The go-ahead run in the 10th inning of Game 4 was one for the ages, as Phillies’ correspondent Ben Silver recounted on Fan Nation:

On a 1-0 count, (Greg) Luzinski lined a ball into the left field corner as (Pete) Rose hammered around third and made the turn for home. He was going to be out, the ball beat him to the plate by four steps.

“What happened next is an image I’ll carry in my mind forever,” said Green.

“The play was in front of me,” Rose remembered. “I knew it was gonna be close and I knew I wasn’t scared of contact.”

Rose barreled into Astros’ catcher Bruce Bochy. He leveled his forearm into Bochy’s collarbone, knocking the ball lose, giving the Phillies a 3-2 lead.

“I can still see him coming,” John Vukovich recalled. He was a utility player on that team and a future Phillies’ coach. “I knew he was gonna score. I guess Bochy will always remember that forearm shiver.”

Game 5 saw the Phillies score five eighth inning runs, only to see Houston score two in the bottom half to send tbe deciding game into overtime.  In the 10th, the Phils got doubles from Del Unser and Garry Maddox to push the pennant-winning run across, and Dick Ruthven locked it up with a save in the bottom half.  The Astrodome, raucous two days earlier, was stone silent.

By this point, the 103-win Yankees had been upended in a shocking three-game sweep by their longtime post-season punching bag , the Kansas City Royals, so the Phils and Astros had the national stage to themselves.  They took full advantage of it.  With this year’s Yankees now out as well, the 2022 teams have a chance to be more noticed, and, most of it, to shut the experts up.

I think most Phillies fans will take the risk of frostbite for the chance at redemption.  Let the games begin.