After Captain America, Christian Pulisic, sacrificed body and soul to almost single-handedly will the United States into the knockout round of the 2022 World Cup, American soccer fans began to think that somehow, in this most surprising and unusually staged year, they might actually have had a chance to go where only one previous men’s national team had gone previously–the final eight.

After all, they had played the far superior English team to a scoreless draw, and Pulisic’s selfless goal helped knock off a very good Irani squad in a politically charged and emotional win earlier this week.  And indeed, Pulisic played well against the Netherlands this morning, nearly opening the scoring early and eventually assisting on a 76th minute score.

But the Dutch are very, very good.  And, as USA Today mournfully reported, despite the strides the U.S. seemed to take, the end result today was all too familiar.

A 3-1 loss to the Netherlands on Saturday eliminated the Americans in the round of 16, the same finish as the 2014, 2010 and 1994 squads. The USMNT has won just one knockout round game since returning to the World Cup in 1990 after a 40-year absence, when the 2002 team reached the quarterfinals.

The loss will be a disappointment for the Americans, who were certain their talent and team chemistry could overcome their lack of experience on the world stage. They talked of winning the World Cup, part of a larger mission to change the way the world sees American soccer. 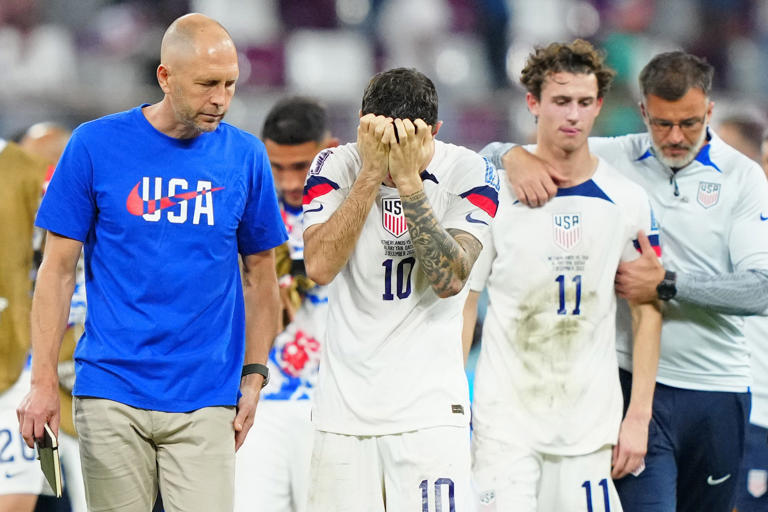 The Americans were down 2-0 at the half, the goals by Memphis Depay and Daley Blind both coming off defensive breakdowns. They managed to pull a goal back in the 76th when Christian Pulisic’s corner kick got recycled and his cross hit Haji Wright on the back of the leg. The ball ran up Wright’s leg and took a wild bounce into the net to cut the Netherlands’ lead to 2-1.

But the USMNT got caught napping again in the 81st minute when Denzel Dumfries was left unmarked at the back post. Dumfries saw the opportunity, waving his hand to call for the ball, and Blind found him with a cross that Dumfries put into the far corner.

The Dutch players on the bench rushed onto the field, knowing the game was effectively over. The Dutch fans were singing, “Na na na na, hey hey, goodbye,” in stoppage time.

So the USMNT becomes the first of the final 16 to go home, needing to be content with what amounts to a rebound but not a leap forward as it gets set to host a portion of the next World Cup, when it returns to a summer scheduling.

Crowds should be friendlier.