Whenever the Clippers and Lakers play each other, it’s a unique event.  They call this rivalry the Hallway Series because they currently share the Crypto.com Arena, as they have since it was built at the end of the previous century, and there is literally a hallway separating their posh locker rooms.  This happened to be a Lakers home game, so the predominant colors were still purple and gold, although one glance at the (thankfully) packed stands saw more than a smattering of the red, white, blue and black that the Clips adorn. 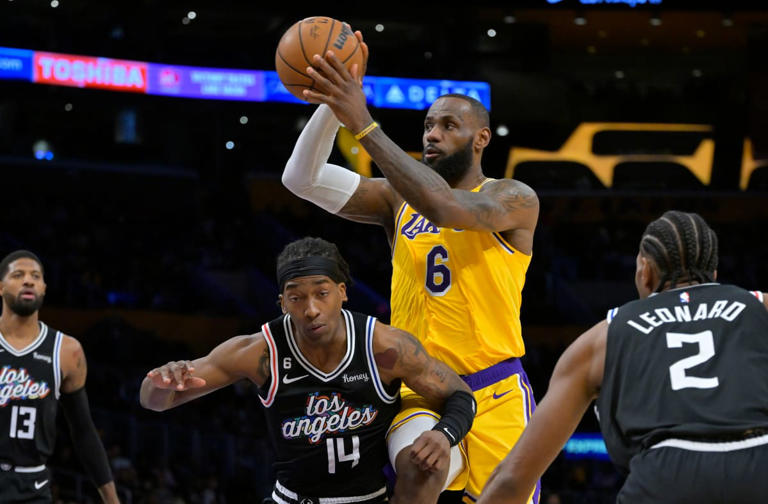 And those Lakers fans had a lot to cheer about.  Lebron James is playing at a fever pitch as he closes in on the all-time NBA scoring record, and took a huge step toward that eventuality with a 46 point effort that now leaves him just 178 points behind Kareem Abdul-Jabbar in that quest.   At the rate he’s going of late, he might just break the record before the February 19th All-Star game in Salt Lake City, where he will serve as one of the captains in the “choose up sides” battle.  Lakers fans cheered him, and they were fully justified in doing so  The rest of the team, particularly the defense, not so much.  And against the Clippers, that’s become the norm.

As Alex Hirschenbaum of All Lakers reminds:

… A superlative individual performance from Los Angeles Lakers All-Star power forward LeBron James was not enough to quell the “visiting” Los Angeles Clippers, who put on an offensive clinic en route to a fairly easy 133-115 win. The loss drops the Lake Show to a 22-26 record, and marks their 10th straight defeat at the hands of the Clippers. The Clippers are now 35-7 against the Lakers since 2012. 2012 was a year removed from the Lakers’ last full-season championship season, and two years before the Clippers were purchased by Microsoft billionaire Steve Ballmer.  Kobe Bryant was alive and well and still producing at a high level.  The arena was still called the Staples Center.  I had just started a high paying top level network job.

Yep, that was a LONG time ago.

Last night’s win was as exemplary of the dominance the Clips have displayed over the last decade plus over The Lake Show, as Hirschenbaum detailed:

Four Clippers scored 19 points or more, led of course by Kawhi Leonard (25 points, nine rebounds, three assists, two steals, two blocks) and Paul George (27 points, nine rebounds, four assists, one blocks), two All-NBA caliber talents who showed what they could look like when fully engaged and actually playing in tandem. The Clippers outshot the Lakers significantly from both the floor (60.7% to 44.2%) and deep (50% to a still-good 40%), and significantly outpaced their “big brother” Lakers in bench production, 53-37.

The Clippers aren’t quite running away with the conference; indeed, last night’s win only elevated them to the #5 seed, a half-game ahead of both Phoenix and Dallas, but at least they are out of the play-in bracket for now.  A home court first advantage is a game away, as that’s what the Clips currently trail New Orleans by,  It’s precarious, but a far better place to be than where the Lakers are, 13th in the 15-team conference and 1 1/2 games behind the inconsistent, but still eminently more talented, defending champion Warriors and the increasingly surprising upstart Oklahoma City Thunder.

The Lakers aren’t quite throwing the white flag for the season as they did after a fourth quarter 8-0 run by the Clippers ended James’ night and any hopes for a 50-point performance.  They actually pulled off the first mid-season trade of consequence, rescuing Japanese import Rui Hachimura from Washington, and Anthony Davis is reportedly coming back as soon as later this week.  They are, for the moment, just three games behind the Clippers, with a little less than half a season remaining. 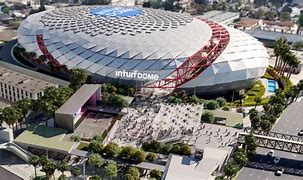 But the future really seems tipped toward the Clippers.  James will likely be moving on one way or the other by the time the Clippers finally get their own home, the Intuit.com Dome that is rising literally within sight of the Lakers’ former home, the Forum.  Yes, it’s name for another digital business.  But Intuit.Com is the parent company of TurboTax.  They’re a lot more likely to be around in the mid-20s than Crypto.

Because we know they’re only two other things as certain than taxes.  One of them is the Clippers beating the Lakers.