These B’s Gets Straight A’s

In a city as sports-crazed as Boston, a winning team produces a passion and love not otherwise seen in most cities.  Boston hockey fans are particularly rabid, and I’ve known it for a looooong time.

I had the pleasure of seeing a game in the old Gahden, the ancient escalator-less, climate-uncontrolled barn that the team called home for nearly 70 of its almost 100 years of existence.  Unlike the well-heeled, somewhat more bourgeois crowds at the Celtics games of the era, the Bruins’ crowd was noticeably blue collar, exuberant, and exactly who myself and my new Boston station colleague believed our station’s new general manager, a transplanted newspaper executive from Houston, should be exposed to as we attempted to educate him on the market and his target audience.

Our game was an Original Six matchup with Detroit, and was filled with fights and rallies.  It ultimately went to overtime, and while the crowd grew exuberant, our new boss sat on his hands, dejected, and as we sat through the post-third period intermission he lamented “Ya mean they’re gonna play some more?”   We explained that this was like extra innings.  That, he got.  His mood began to change as they soldiered on through the extra period, and when Wings great Steve Yzerman scored to send the B’s to a 5-4 loss, our new friend was dejected, but ultimately understood that when a hockey game was on our competitor we had to pay attention to its significance, unlike the reaction the sport had in Texas.

These days, Boston’s doing far better, the NHL’s best as it approaches the halfway point of the 2022-23 season.  Last night, they faced a stiff test in Newark against the Devils, who had been neck-and-neck with them until a recent set of losses opened the gap.  Like our long-ago game, it was nip and tuck, until its latest leader took control, as the Boston Herald’s Steve Conley reported: 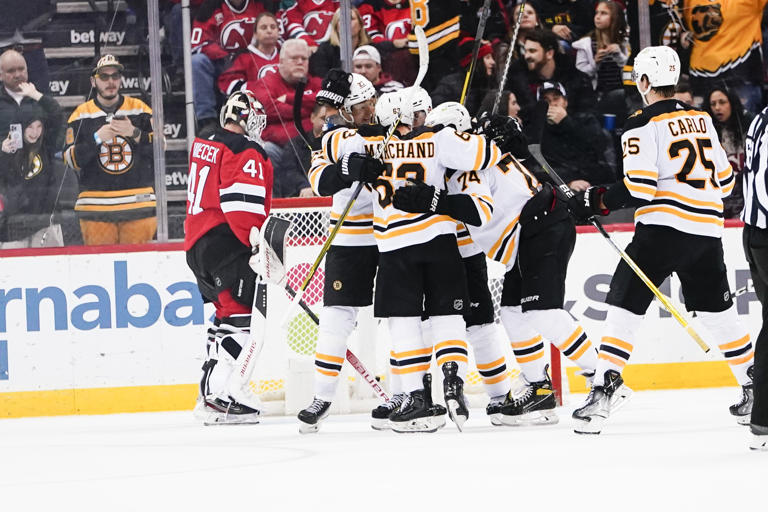 Captain Patrice Bergeron, who had a goal taken off the board on Tuesday because of an offside challenge, gave the B’s the go-ahead goal with 4:09 left in regulation when he deflected a Hampus Lindholm shot in traffic past Vitek Vanecek.

Former Devil Pavel Zacha then added the insurance empty net goal with 1:49 left to finish it off.

This team does not grasp the concept of the “scheduled loss.” It was the second time in a week that the B’s faced the young, talented but sagging Devils on the second half of a back-to-back and they beat them both times in regulation, essentially outlasting them in both games. Nearly at the halfway mark of the season, the B’s have yet to lose two consecutive games. 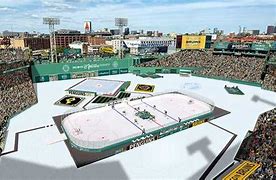 So when the Bruins head into a homestand that will feature their second-ever hosting of the sport’s signature regular season game, the outdoor Winter Classic, on the day after New Year’s at Fenway Park they will be the league’s best.  And at a time when the team that usually plays in that stadium is signing a host of journeyman free agents while letting heroes like Xander Bogearts join Mookie Betts as nine-figure-earning Southern California residents, it may very well be the only winning team that the century-plus-old ballyard may see in 2023.

And you can bet that with the chance of slightly warmer weather looming on Monday, those fans won’t mind overtime. But, first and foremost, a win.  Like they’re getting quite a number of this season already.