There Is Crying In FOOTBALL

During a 13-year career with the San Francisco 49ers as a bruising defensive tackle, Bryant Young inflicted quite a bit of pain on opposing offenses.  Nothing compared to the pain inflicted upon him by life in 2016.

Let MSN pick up the story–frankly, I’m a bit too teary-eyed myself to continue for the moment:

On a day when former San Francisco 49er Bryant Young was honored for a career’s worth of achievements, the legendary defensive end didn’t want to highlight himself. Instead, in a moving tribute, Young took time during his NFL Hall of Fame acceptance speech to tell the story of his son Colby, who passed away from brain cancer when he was just 15 years old. Young spoke of his son as a joyful child with many interests, including football, and described how Colby fought bravely in the face of a cancer diagnosis even as his condition turned terminal.

“Colby, you live on in our hearts. We will always speak your name,” said the elder Young, prompting a standing ovation from the crowd.

In response to the tragedy, Young discussed how community, including his “brothers” from the 49ers, has come to mean so much to him. “In an isolated world, personal connections matter more than ever,” said Young.

A number of NFL personalities chimed in to discuss Young’s passionate speech. With former Oakland Raiders beat reporter Jerry McDonald writing, “To call 49ers’ Bryant Young a class act doesn’t do him justice. His speech today was like a window into his soul, and the view was spectacular.”

Before the emotional speech, Eddie Debartolo, the famed former 49ers owner, presented Young with his customary golden jacket. Young’s old teammates, and fellow Niner Hall of Farmers, Jerry Rice and Terrell Owens were also in attendance for the ceremony.

Young finished his speech by mentioning how serendipitous it was that he was inducted into the Hall of Fame as a member of the class of ’22, because 22 was Colby’s favorite number.

If that had been the only emotional moment of yesterday’s Pro Football Hall of Fame inductions in Canton, dayenu.
But let’s not forget Sam Mills.  As AP reported: 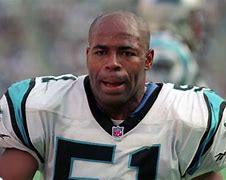 Mills, the 5-foot-9 linebacker nicknamed “Field Mouse” during his 12-year career with the New Orleans Saints and Carolina Panthers, was inducted posthumously. An inspirational figure, Mills overcame tremendous odds to even reach the NFL.

Mills played Division III college football and was not drafted. He was cut by the Cleveland Browns and Toronto Argonauts of the CFL and began his professional career with the USFL’s Philadelphia Stars. Jim Mora, who coached the Stars, brought him to New Orleans in 1986 and Mills never looked back.

Mills became an assistant coach with the Panthers after his retirement. He was diagnosed with intestinal cancer before the 2003 season but kept coaching during his treatment and made what is known as his “Keep pounding” speech on the eve of the club’s Super Bowl matchup with New England at the end of that season.
Mills died in April 2005 at age 45. His “Keep pounding” remains the Panthers’ tag line. 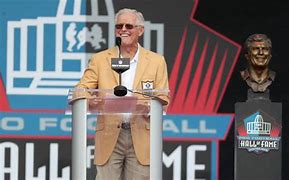 And not to be outdone, former St. Louis Rams Super Bowl-winning coach Dick Vermeil, forever connected with crying tears of joy just after his team held off Tennessee Titans wide receiver Kevin Dyson one yard short of the goal line to win the first 21st century Super Bowl, held back at least his public display of tears to bask in his moment in the sun.
These three joined the first-ever Jacksonville Jaguar inductee Tony Boselli, the late Raiders’ receiver Cliff Branch, Green Bay Packer and inventor of the Lambeau Leap Leroy Butler and pioneering referee Art McNally (blissfully still alive at 97) in this year’s class.
Make that class with a capital C.
Courage…