The Silence Of The Rams

I admit it, I got swept up in the fever that gripped Southern California last year as the Los Angeles Rams, in just their sixth season back from their two-decade detour to St. Louis, won the Super Bowl and only their second NFL title since the 1950s.  I went to both the season opener, the first played in front of a paying crowd at the magnificent SoFi Stadium, and their first-round playoff win against the Arizona Cardinals, the same Cardinals team they had defeated last week to raise their 2022 season record to 2-1 and give fans the belief that, after a season-opening loss to Buffalo on national television, this second such showcasing would go much better. 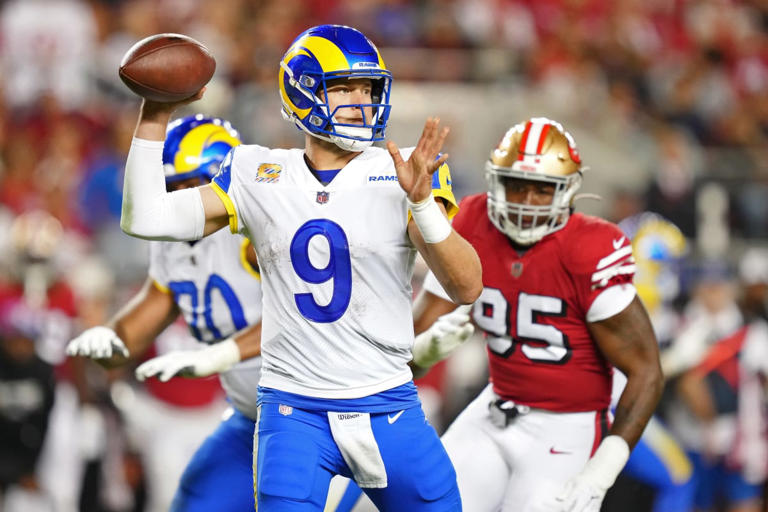 Well, lost in the excitement of the last two weeks’ wins was the gnawing reality that last night’s Monday night showdown in San Francisco with the 49ers actually should have had them as an underdog.  The Niners have owned the Rams in the regular season of late, and in particular quarterback Matthew Stafford.  While the Rams and Stafford did deliver a resounding comeback in last January’s NFC Championship game with a fourth-quarter drive with depleted resources that sent them into the Super Bowl as a home team (a drive I missed live due to a pizza on fire I’ll never forget), that’s the only victory the Rams have had against the Niners since 2019.

And after last night’s 24-9 vanquishing of the Rams by the Niners, that’s still the case.  Wearing throwback uniforms from their 80s glory days, and, as fate would have it, again featuring Jimmy Garropolo as the efficient leader of their game plan, they confounded the Rams time and time again.  Particularly down the stretch, as Zach Dimmitt of RamsNation recounted:

Despite the sluggish play on offense, LA still had a chance to tie the game down 17-9 with under eight minutes to play. But it was Stafford’s 57-yard pick-six and eventual fumble later in the quarter that put the finishing touches on San Francisco’s win, as he continues to suffer from the turnover bug against a pesky 49ers defense.

Dating back to his first year in LA last season, Stafford, along with a 1-3 record, now has seven turnovers against the 49ers. He’s also now in a five-way tie for a league-leading five interceptions after his latest pick.

His pick-six to San Francisco safety Talanoa Hufanga was eerily similar to the one he threw against the Niners last season, as safety Jimmie Ward ran down the same sideline at Levi’s Stadium on Monday Night Football.

With Deebo Samuel (cue Chris Berman’s warbling of the forgettable Boz Scaggs 70s hit “Lido Shuffle”) leading the way, the Niners looked much more like a contender for past seasons’ glory days last night than the defending champions did.  They get yet another home game against the surprising Cowboys this weekend, conveniently a day game, so there’s potentially hope for a Rams rebound. 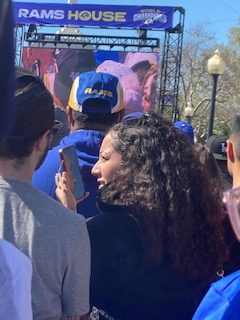 But after watching last night’s feeble effort, let’s just say I’m a lot less enthusuastic about the chances of this scene from last February recurring in downtown Los Angeles anytime soon.  And while a Market Street parade like those held regularly in the glory days of the Niners’ unis last night may not quite be on the table just yet, these Niners seemed a lot closer to reprising theirs than the Rams did.