As college football grappled with the results of an upset-filled championship weekend, with the third and fourth-ranked teams both coming up short in their respective conference title games, its selection committee was faced with a couple of worst-case scenarios.

If they had followed the most orthodox and traditional leanings of a committee that favors bigger names and personalities, the temptation would have been to penalize both losing teams from those games, TCU and USC, and move up numbers five and six, respectively,  Ohio State and Alabama.  Two exceptionally strong brands.

There was much consideration and lobbying given to including the Crimson Tide, and indeed, were there not the looming expansion of a 12-team free-for-all coming in the season after next, there might have been a lot more clamoring to vault ‘Bama to the final four.  But in a seeming nod to something resembling fairness, a two-loss ‘Bama team without even a division title just could not be justified.  So Bryce Young will simply have to settle for the option of an earlier slot on New Year’s Eve with an intriguing test against TCU’s Big 12 championship game conquerors, Kansas State, to be his college finale.

Not only did TCU’s loss not drop them from the final four, it did not even drop them from their third place slot they had during prior to the 31-28 loss to the Wildcats yesterday.  One might think that a game lost in overtime may have been seen as the motivation to give the Horned Frogs the benefit of the doubt.  I’m not one of those.

Being the TV guy, I believe what is the greater motivator is the potential carrot of a rematch between Ohio State and Michigan should the motivated Buckeyes find a way to knock off the Bulldogs.  While the odds look to be against OSU going against an unbeaten Georgia team in a game to be played 28 miles from their campus (the Peach Bowl in Atlanta), bear in mind they were an unbeaten team eventually blown out on their home field by the Wolverines in what turned out to be the most-watched regular season college football game in more than a decade, and the most-watched in FOX’s history carrying the sport. 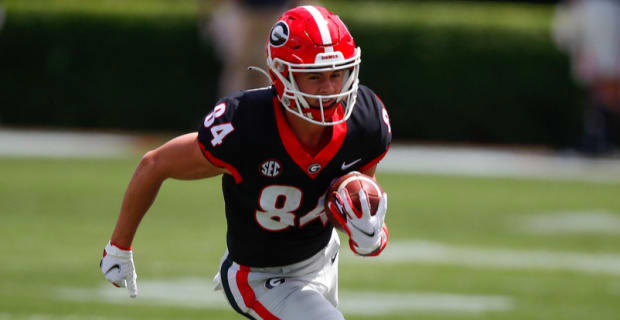 And if Georgia does indeed hold serve, they will be heading to Los Angeles for a chance at  back-to-back titles. Only Alabama and Nebraska have won back-to-back unshared titles in the last 30 years.  Which is one huge reason why the Tide was even considered a candidate for the Final Four at all this year.

So the Bulldogs are chasing immortality, and the Buckeyes are chasing revenge. And they’re getting the night game slot on New Year’s Eve for that reason.

The 80 other schools that will be playing games between December 16 and January 2nd will be essentially being the barkers for these games.  There will not be a single day between now and then where some football game won’t be played, all the more for people to gamble on and have as background noise while they unwrap presents, cook, play with loved ones or simply just be grateful they have people in their lives.

Well, at least I’ll be watching.