The Marlins Are Worse Than Number 2

When I fully embraced the passions of South Florida sports teams, I tried like heck to embrace the Marlins.  On paper, there’s an awful lot to love.  They’ve won two titles in their first 29 seasons, which is two more than the Mets have had in that span.  They’ve got a pretty decent nucleus of young pitching that carried them to the second round of the playoffs in 2020.  And they had the Michael Jordan of baseball as their CEO.  Everyone loves Derek Jeter, even most Mets fans.

They began this off-season by signing Avisail Garcia and trading for Joey Wendle, two names I learned the hard way were worth knowing as I struggled in my fantasy baseball comeback season last year.

Then the lockout occurred.  Promises allegedly made to Jeter for future investments were apparently reneged upon.  So, on a day where a longer and more intrusive lockout loomed, Jeter abruptly resigned.

And so the Marlins’ short but entrenched tradition of being gutted by their own management and their snake bitten history continues. 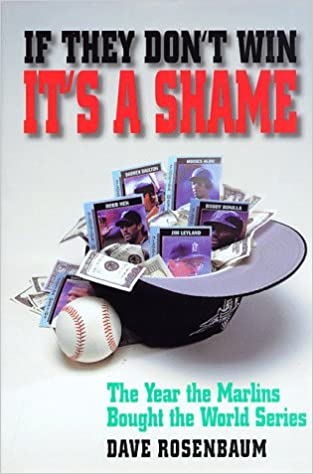 Wayne Huizenga, he of Blockbuster fame, was the original owner of the then Florida Marlins. The 1997 championship, at the time the quickest achieved by an expansion franchise, was effectively bought on credit.  A revealing book written by a college buddy of mine, IF THEY DON’T WIN IT’S A SHAME, documents the sordid details compellingly, so well that its author was eventually banned from covering the team further. Within months of that achievement the team was dismantled, with the team reduced to last place afterthought before the end of the century.   Huizenga?  Well, he sold at a profit.

Then there was Jeffrey Loria, the notorious Philadelphia art dealer who eventually inherited the team.  Loria leveraged a few paintings and some timely hitting from a young Miguel Cabrera and quality pitching from Josh Beckett, among others, into a 2003 title where they knocked off (ironically) Jeter’s Yankees. (Admittedly with a little help from Steve Bartman).  That team, like Huizenga’s, was sold off soon after that upset.

Luria did keep the team for a while, extorting a new stadium from Miami that tore down the Orange Bowl and replaced it with a spaceship that initially included a fish tank embedded in its outfield fence.   The tank eventually disappeared, as did Loria.Tragically, along the way the franchise also lost one of its most promising homegrown pitching prospects, Jose Fernandez, in a boating accident at the horribly young age of 25.  Once again, the Marlins, now with the Miami moniker, were yet again a joke. 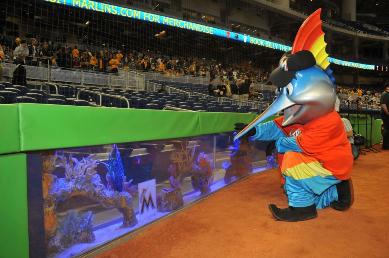 And now this.  While Jeter was the face of the ownership group that took over the team five years ago. the money man today is one Bruce Sherman, who reportedly has minimal interest in anything resembling fielding a competitive team.  The Marlins followed up their encouraging 2020 with 95 losses last year, and per the same reports after some time to ponder the immediate and long-term possibilities Sherman is now looking at a quick sale to take advantage of the undeniable appeal of the market and its particular appeal to South Florida’s substantial Latino fan base, where baseball remains a strong cultural touchstone.

It’s therefore understandable that while the Dolphins, despite their own issues of late with ownership integrity. retain an ardent and passionate fan base and while the Heat and Panthers succeed in their niches, the Marlins struggle to achieve similar relevance beyond those who truly love the game.  You’d be hard-pressed to define a team with such a brief history that has had the degrees of highs and lows and success in spite of themselves in any sport.

Perhaps someday in the not-too-distant future they will find stability and a top executive with perhaps even more acumen than Jeter, who admittedly may have been in over even his head with this as his first significant post-retirement gig.  Perhaps when that happens the wonderfully passionate South Florida sports fans I’ve learned to love will embrace the Marlins like the other aqua and orange teams they adore.  That day sure isn’t today.