The Los Angeles Mets of Anaheim?

Having lived the first 40-something per cent of my life in New York and the balance in Los Angeles and been a baseball fan for almost every conscious moment of it, I think I qualify as qualified when I posit that as the Yankees are to New York, the Dodgers are to Los Angeles.   Yes, I know the Dodgers, like me, moved, but heck, they’re now in their 65th year.  If the franchise qualifies for Social Security, it’s safe to say the majority of their fan base today identifies them only as LA.

So I also think I’m qualified to say that as the Mets are to New York, the Angels are to Los Angeles.  And the franchises have been intriguingly intertwined since their creations.  Both were forged out of major league baseball’s first significant expansion, the Angels born in 1961 and the Mets in 1962.  Both started out as tenants in ballparks linked to other teams–the Angels started at the Los Angeles Wrigley Field and then shared Dodger Stadium for its first four years, while the Mets began at the crumbling Polo Grounds once home to the Giants and, prior to the erection of their first stadium, the Yankees.  Both later built gleaming new stadiums for themselves away from the inner city they started out, the Mets for the relative expanse of Shea Stadium in Flushing in 1964, sharing the venue with a World’s Fair and the Angels for Anaheim in 1966, sharing the city with Disneyland.

And then they made a December 1971 trade with each other that effectively defined their 1970s franchise trajectories.  The Mets desperately needed a third baseman after an earlier trade for Joe Foy turned out to be a dud (they’re currently on their 180th third baseman in 60 years, so nothing much has changed).  So they offered a package of younger players led by a mid-range starter whose chief claim to fame was a memorable relief appearance in the deciding game of the inaugural National League Championship Series that helped eliminate the Braves and send the Miracle Mets into the 1969 World Series they eventually won.

Nolan Ryan thus became an Angel, he threw a bunch of no-hitters and eventually led them to their first division title by decade’s end, a season the Mets finished with 99 losses, last place, and a home game that drew 788 fans. 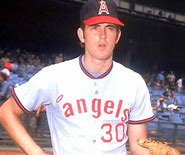 The Mets eventually did rebuild their team and when they peaked in 1986 the Angels had barreled their way into a third division title in seven years.  They pulled out to a 3-1 lead in their own championship series and were one strike away from their first World Series and a possible showdown with the Mets, who were doing their best to beat a Houston Astros staff co-anchored by–Nolan Ryan.  As we know, they never got that third strike.  Dave Henderson (yes, the same one who hit the 10th inning home run in Game Six that gave the Red Sox their short-lived extra innings lead) crushed a Donnie Moore fastball into the left field seats on a blisteringly hot Sunday afternoon that ultimately crushed Moore’s spirit, sobriety and eventually his will to live.   I never got to see the Mets-Angels World Series I had banked on going to in Anaheim (though I did somehow make it to Game Seven in New York–more on that some other time).

The Angels still had a series lead and two more chances to close out in Boston, but most observers knew it was a fait accompli that the Red Sox would win out.  On the same evening after the Mets dramatically survived an epic 16 inning battle to knock out the Astros (and Ryan), the dreams of a NY-California series not involving the other two teams died as the Angels were whipped 8-1.

So the Angels naturally hated the Red Sox and especially Henderson.  Which makes the Mets’ comeback in Game Six all the more special to their fans.  For Mets’ fans, it was exhilaration.  For Angels’ fans hopping on the bandwagon, it was exorcism.

For all the years since, both teams have had some success, just not concurrent, and always in the shadows of their more storied crosstown rivals.  This year, both teams are determined to rebound from disappointing 77-85 seasons with the reinforcements of star pitchers.  For the Mets, they purloined Max Scherzer from the Dodgers.  The Angels?  They threw a $21 million trial balloon to a Mets star who had pitched two innings in the previous two seasons, Noah Syndergaard.

“Thor”, as he’s known by Mets fans, made his Southern California presence known during his rookie season in 2015, when he came out of the bullpen in a deciding game of a National League post-season series (NLDS Game 5) to shut down the Dodgers.  I’ve never had a more emotional moment as a fan as when I sat alone watching them celebrate and feeling the presence of my recently deceased dad and hearing him make the same comparison to Ryan’s effort against the Braves in ’69.

Last night Thor made his Angels debut, and he was spectacular.  5 1/3 shutout innings, two hits allowed, nearly two-thirds of his pitches for strikes.  Throw in a follow-up relief effort by fellow ex-Met Aaron Loup, 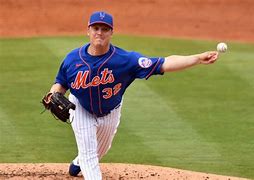 a Mike Trout homer and an excellent closing job by Rafael Iglesias and it all added up to a 2-0 win, the Angels’ first of ’22 and a sign that maybe things will indeed be better in Orange County this year.

Between Buck Showalter and Joe Maddon, these teams’ managers have 133 years of life, 37 seasons of managing and an awful lot of personal motivation to win NOW.  They will face each other in Anaheim for a three-game series in mid-June, and you know I’ll be there.  And the way I see it, the Mets helped the Angels get over some of their disappointment from ’86 with their own accomplishments, and now Thor may help them with achieving some new ones.  I figure the Angels owe me.  Let’s hope the mid-June series won’t be the only one we see between them this year.  Here’s to October in Flushing?