Since the first-round ouster of Serena Williams for the second straight year, Wimbledon 2022 has been somewhat meh.  A few surprises, some intriguing storylines emerging.  But until the second week, those storylines are best emerging.

Yesterday, top men’s seed Novak Djokovic took matters into his own hands to accelerate the newsworthiness of the tournament as well as his own polarization.  Down two sets to Italy’s Jannik Sinner, “The Joker” calmly, methodlically rose up and, for the seventh time in his storied career, swept the last three sets to advance to his 11th Wimbledon semifinal appearance, 5-7, 2-6, 6-3, 6-2, 6-2. 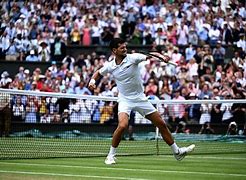 The list of superlatives that accompanied this win is impressive.  Besides the two noted above, this marks the 26th consecutive Wimbledon win for Djokovic, who is pursuing his fourth consecutive Championships championship.  And he is continuing a quest for pulling within one of all-time Grand Slam title leader Rafael Nadal (22), and breaking a tie with Roger Federer for second place in the process.

Looking ahead, he will square off tomorrow with Cameron Norrie, a U.K. native who will have home court advantage in his first-ever Wimbledon semi.  And potentially awaiting him in a Sunday final would be-Nadal. What adds to the pressure is that Djokovic will not be at the U.S. Open at summer’s end, for the same reason he didn’t compete in Australia.  Djokovic is not vaccinated, and adamantly so at that.  So he’s likely going to be booed for at least two supercharged reasons.

Every good storyline needs a hero and a villain.  Unquestionably, Norrie will be a hero to the partisan throng tomorrow.  Whether you agree with his personal decision or not, Novak is clearly not poised to be the hero.

But neither was he yesterday.  And true champions are resillient when pushed.  Yesterday’s comeback was a reminder of exactly his level of resillience, not to mention talent.  And sure enough, when he completed his win Centre Court exploded in cheers.

Wimbledon needed this.  The sport needed this.  We’ll deal with the Nadal showdown if it happens–Rafa had his own five-set victory this morning that he needed to survive.  But for now, we’ve got true excitement with real stakes.