Caleb Williams made history last night when he won the 2022 Heisman Trophy.

Not necessarily because he was USC’s eighth recipient of the honor, breaking a tie with Ohio State and Oklahoma (though, thanks to the Reggie Bush incidents, the NCAA only recognizes seven of those wins),  Not just because he was the third Trojan quarterback to win, tying USC with the Sooners for the most Heisman-winning quarterbacks.

In my view, it’s largely because the way college football players now can more freely move from school to school, in a manner similar to their coaches, has changed.  And the reason Williams did not win his Heisman for Oklahoma is largely due to that new reality.  As well as the fact that the man responsible for developing  Oklahoma’s two most recent Heisman-winning passers, Baker Mayfield and Kyler Murray, head coach Lincoln Riley, had himself moved over from Oklahoma this year and had had experience with both Mayfield and Murray in getting them each to transfer from their respective initial schools, Texas Tech and Texas A&M, to seek the offensive game plan and expertise of Riley to flourish and become top draft choices and millionaires.

Those two had to sit out a season before spending three more en route to greatness.  Williams had no such sabbtical imposed upon him through the new transfer portal process, and was able to achieve this honor as a sophomore in Riley’s first season as USC,  And did he take advantage of this momentum.  An FBS-best 47 touchdowns, 37 passing and 10 rushing, and leading the Trojans to an 11-2 record and the Pac 12 South title a year after they went 4-8.  And, should he stay through his senior year, a chance to compete for the Big 10 title as well.

Which, in the NIL era, is now more of a possibility than in the past.  WIlliams is profiting considerably from his fame already, and no doubt will grow his potential with this award in hand.  And now that fellow Sooner QB Mayfield has relocated to Los Angeles, he’ll have yet another familiar face to pal around with in paradise.

And we’re told Riley’s mancave is a great place to hang in the off-season, too.  Way better than, say, the Houston Texans’ locker room.

Besides, both Williams and Riley have some unfinished business, as USA Today’s Scooby Axson reported as he while received his trophy: 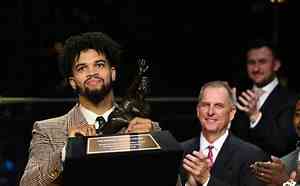 “I may be standing here today, but ya’ll get to go to the College Football Playoffs. Guess you can’t win them all,” Williams said after winning the award, drawing laughter from the crowd at Lincoln Center.

Bennett’s Bulldogs will take on Stroud and the Buckeyes in the Peach Bowl on Dec. 31, while Duggan’s TCU squad plays Michigan on the same day.

Williams thanked his USC teammates, Riley and his parents for being inspirations, saying “we’re in this together, and I wouldn’t want it any other way.”

Nor would many Trojans fans.  They’re at least playing in a New Year’s Six game, and even better things on the horizon.

And thanks to college free agency, those better days are coming, you might say, Sooner than later.