For all of the traditions currently associated with Thanksgiving, perhaps none is as cross-generational and as popular (other than the meal itself) than watching pro football.  Football and Thanksgiving have been linked together since the origins of the game, and in Detroit alone the Lions have hosted such a game for 84 years.  This year, there will be as appealing a tripleheader as any in the 16 years since the NFL expanded to prime time on Turkey Day, mostly to ensure that the face of the holiday for football fans, John Madden, who had moved to NBC at the tail end of his illustrious broadcasting career, would still have a presence that he entertained a generation with.  The crucial Giants-Cowboys game in Dallas in late afternoon bodes to have by far the largest measurable audience of any single network’s programming for the entire year

Madden was well into a career that, through both sportscasting and advertising, made him as recognizable a television personality as anyone in America when, on Thanksgiving Day 1989, he began a new tradition that connected his two obvious passions–football and food–forever.  As The Sporting News’ Edward Sutelan recounted last year:

During the 1989 Thanksgiving game between the Eagles and Cowboys, legendary commentator John Madden decided that the MVP for the game should receive a turkey leg as an award for their performance in the game.

Eagles linebacker Reggie White was the first-ever recipient of the turkey leg award after he led the Philadelphia defense to a 27-0 shutout of Troy Aikman and the Cowboys.

But the legend of the turkey leg award had further still to grow.

The following year, Madden again handed out the award, this time to Cowboys running back Emmitt Smith. Smith had taken 23 carries for 132 yards and two touchdowns in a 27-17 win against the Redskins. Following the game, Madden remarked that he wished he could give out six turkey legs, one to Smith and one to each of Dallas’ five offensive lineman, which prompted Joe Pat Fieseler, the owner of Harvey’s Barbecue Pit, to create a six-legged turkey, according to the Fort Worth Star-Telegram in an article from Nov. 25, 1998. 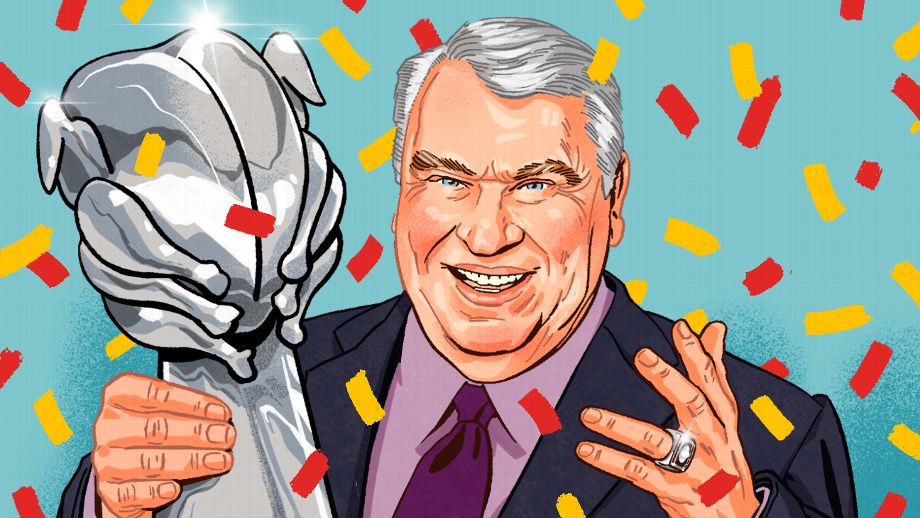 “We had to find turkeys that had a lot of legs on them,” Madden told the Star-Telegram. “There’s only one place you can get a turkey with more than two legs, and that’s in Texas.”

Fieseler explained that while it might look like a strange bird, it actually has an explanation from where it comes from.

“The story I like to tell is that these turkeys grow on a farm near the nuclear plant in Glen Rose,” Fieseler told the Star-Telegram.

The actual origin of the six-legged turkey is not that it’s a radiated bird. Two legs are, of course, natural and the other four are attached using three-inch wood skeers, according to the report.

Seven years later, Madden took Thanksgiving poultry to new heights, when on the Sunday following Thanksgiving, while in New Orleans, Madden met Glenn Mistich, and came face to face (or fork to mouth) with perhaps the most deliciously indulgent secret known at that point only to Cajun gourmands,  As Ryan Hockensmith told the story last year on ESPN.com:

Mistich’s…hands shook inside the gloves he wore to carry a monstrous 17-pound dish covered in foil. His wife, Leah, and three young kids bounced alongside him.

A friend, New Orleans radio personality Bob DelGiorno, was also walking with him to the Rams-Saints game on Dec. 1, 1996. DelGiorno had been doing on-air Saints game days for long enough to have become friendly with John Madden, and he had told the former coach-turned-broadcasting legend about a delicious vegetarian’s nightmare for which Mistich had become well-known in the New Orleans area. It was a deboned duck stuffed inside a deboned chicken stuffed inside a deboned turkey, with a generous mix of cornbread and sausage dressings slathered throughout. 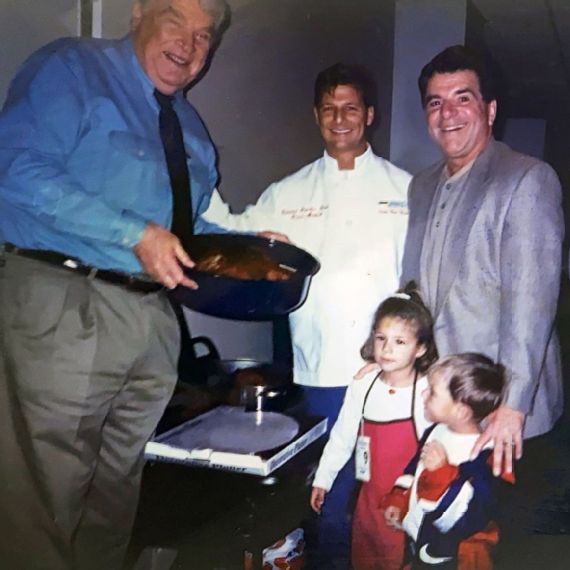 If a picture paints a thousand words, then this one is a masterpiece.  One could say that when Madden first laid eyes on a turducken, it was a very happy meat-ing.  For the balance of his Thanksgiving Day broadcasting career, turducken was on the menu.

A lot was written about Madden last year when FOX Sports debuted a wonderful documentary about Madden’s life and times, ALL MADDEN, on Christmas Day.  Madden, retired since 2009 and essentially out of the public eye save for his name on video games since, was interviewed and reminisced about not only his impact as a broadcaster and spokesman, but also reminded people that he was a damn good football coach, who led the Raiders to an NFL title in Super Bowl IX, reaching the pinnacle of his career at age 40 (a record that stood until it was eclipsed earlier this year by the Rams’ Sean McVay).  Two years later, ostensibly citing health issues, Madden walked away from coaching, but not from football.  Thanks to his innovative telestrator, a generation of fans grew up with more insights on coaching than preceding ones, using technology that was well ahead of that which is more readily available today.  We were all reminded of all of this, not to mention’s Madden’s takes on the game of today, when this premiered last year.

And it was just in time.  A mere four days later, Madden was dead at age 85.  Which means this is the first Thanksgiving where Madden won’t physically be here to celebrate.

But, as Cam Inman of his hometown San Jose Mercury-News reported today, this will the first of what will likely be an eternal legacy tribute to Madden and his favorite holiday.

The NFL calls it the “inaugural John Madden Thanksgiving Celebration,” and it comes complete with an image of Madden on the 25-yard lines and on helmet stickers. 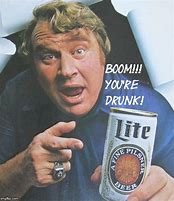 So as you’re watching today, grab a turkey leg or shove a forkful of turducken into your gut.  If you’re a vegetarian, take a swig of Lite Beer, just like Madden urged us to do throughout the 80s.  If you’re a sober vegetarian, play a few minutes of Madden 22 at halftime. 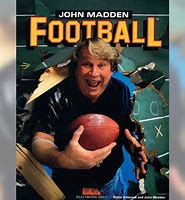 If you’re a sober vegetarian non-gamer, then just lay back and watch the game, and especially watch the tribute show.

And remember that if you think it’s sacreligious for a holiday to be connected with a personality in a manner akin to a bowl game or stadium naming rights, consider that John Madden had almost as much to do with your enjoyment of it than anyone since perhaps the Pilgrims.