Take Me Out To The Pre-Game

The major league baseball All-Star Game returns to Los Angeles after a 42-year hiatus from Dodger Stadium and a dozen years removed from the city,  In recent years to promote the game beyond the elite who can afford tickets for the actual game or, better yet, the Home Run Derby, they’vr added a fan festival, similar to the NFL Experience, for the masses to enjoy, mostly for free. 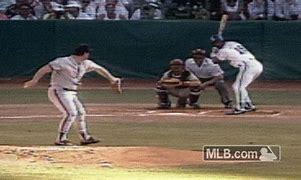 Back when the game was previously in Anaheim, in far more afforable ticket price days, I was in the stands as the guest of a TV distributor when Bo Jackson launched a memorable 450 foot leadoff home run.  The two-sport star of his era and a staple in Los Angeles as a Raiders running back, this was perhaps the crowning moment of his baseball career.  So since I’ve been blessed with at least one All-Star memory in person, I’m a bit less remorseful about tickets this year being WAY out of my price range.  At the rate I’ve been going, the Expo train line fare may soon be beyond my grasp, but for now I can still afford that.   The fact that literally no one else I know had the interest, free time or, dear G-d, the lack of COVID paranoia to even want to go with me is what I’m honestly most bitter over.

So yet again I took myself out and enjoyed a perfect sun-drenched afternoon randomly interacting with other passionate baseball fans, and frequently their friends and children, at the Play Ball Ballpark that temporarily replaced L.A. Live.   While large fences protected the statues of basketball and hockey players and broadcasters around the Crypto.Com Arena (jeez, I HATE that name), baseball took over downtown LA. 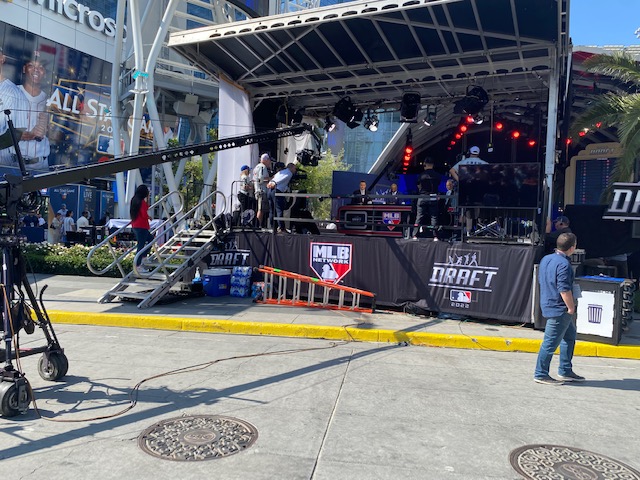 The centerpiece today was the remote location for the MLB Draft, a first-ever attempt for the league-owned network to attempt to duplicate the success other sports have had with their remote venues.  Truth is, as MLB has historically been driven by a minor league system that funnels players into the pros, the draft has never been a very popular drawing card.  Unlike football, basketball and hockey, rarely do any draftees wind up in “The Show” when they are selected.  But with the shrinking of the number of minor league teams, as well as the growth in interest and available video of college or even high school prospects, there is at least some growth in awareness, and at least for now Los Angeles protocols  are relaxed enough to stage something resembling a show in the Microsoft X-Box Theatre venue. 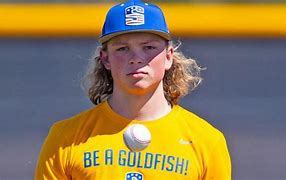 We’ll have more about the draft in the coming days; suffice to say what helped the awareness of those who were picked today was some familiar lineages.  Top draft pick Jackson Holliday, the #1 pick, is the son of former Rockies and A’s standout Matt, and as an Orioles shortstop has the potential to be the 21st century Cal Ripken.  The Orioles are rapidly becoming a feel-good story, having somehow vaulted in wild card contention after a 110-loss season last year.  They already have some excellent young position players, and Holliday may not be that far away from his own debut. 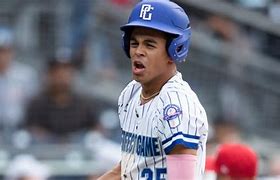 #2 pick Druw Jones is the son of former Braves and Yankees outfielder Andruw.   Yes, the same Andruw who wowed the world as a 19-year-old rookie who got his team off to a 2-0 lead in the 1996 World Series, before the Yankees rebounded with a sweep in the last games ever played at Atlanta-Fulton County Stadium and denied the Braves a second consecutive title.  Jones will be an Arizona Diamondback, again possibly sooner than later.

Free churros, coffee and water, and some impressive tours of surprisingly affordable campers, also provided entertainment.   Deejays were rampant, those with arms could throw against a radar gun, and families could cornhole their way into qualffying to win a Chevrolet Silverado.  I suppose if I had children I would have enjoyed it more. 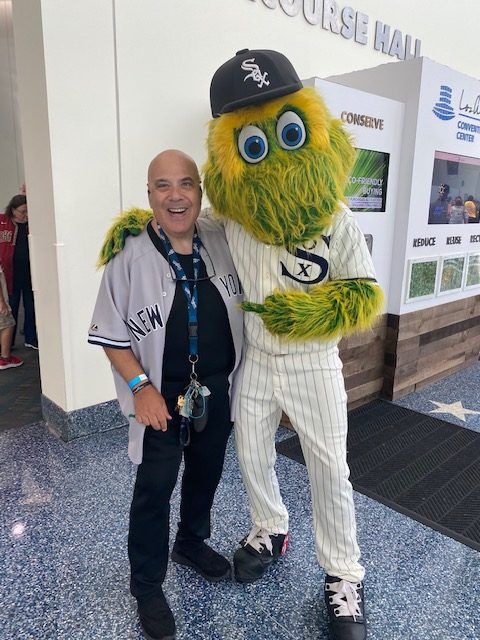 But I did get to actually mingle with people who do who actually love the game almost as much.  And some incredibly friendly mascots.  At least they’re not petrified by social distancing–after all, animals–or whatever the f–k they are– don’t transmit viruses, especially when masked.

So I’m very grateful that despite my struggles and troubles I at least got a chance to share my passions with equally passionate people. who I’ll likely never see again.  Somewhere, there are people who I may actually be able to see a game with again in person who I actually know.  They continue to assure me they’ll be free “after the pandemic”.  Yeah, right.

For now, the four-day pre-game is what I have, along with my health and passion.  With the same level of hope and optimism that teenage draftees have.  I look forward to rooting them on in person.

Many people lament about the confusion and aging appeal of the current game.  Commissioner Rob Manfred was booed mercilessly when he was introduced to the crowd.  Much of it is justified, in my opinion.  But for today, all was forgiven, at least by me.

Thanks to letting me in indulge my passion.  Play ball.