My theoretical vote for the 2022 Comeback Player of the Year in the NFL has already been cast.

In a surprising move that accompanied NBC’s expected anointing of Mike Tirico to the role of Al Michaels’ replacement with incumbent Cris Collinsworth by his side, what came out of left field was the revelation that NFL Network’s Melissa Stark would inherit Michele Tafoya’s role as sideline reporter.

For Stark, it’s a homecoming of sorts.  From 2000-2003 she rose from virtual obscurity as an ESPN talent hosting SportsCenter and Scholastic Sports America to be the sideline reporter for Monday Night Football on ABC.  At age 27, she shared a primetime stage with Michaels and Dan Fouts, and was the youngest sideline reporter in Super Bowl history in 2002.

At the time, Stark was widely ridiculed as being too young, attractive and inexperienced for such a high-profile job.  Unsubstantiated rumors of her having slept her way into opportunities buzzed around the world of sports publicists who I regularly interacted with at the time.   My in-the-know friends scoffed.  “In their dreams”, they reassured.  But ABC was beginning to have declines in audience and quality that eventually saw the main franchise leave for NBC, so Stark was out at 30.

Instead of pouting and looking for a tell-all book to counter the rumors, Stark did what any other responsible, educated professional woman would be expected to do.  She got another (less high profile) job at NBC Sports, found her true love, and began to raise a family of four children as well.  A decade later, she slowly began a return to the NFL with a quiet early Sunday gig on NFL Network that preceded that network’s more prominent GameDay show.  It started on the West Coast at 4 AM, by far the earliest start for a regular season pre-game show in the sports’ history.  Naturally, I was a loyal viewer from the outset.

On FIRST ON THE FIELD, Stark broadcast from a much smaller studio located in a nook within NFL Films’ headquarters near her New Jersey home, rather than the cavernous Culver City studio the balance of the network broadcast from at the time.  In the more intimate, quieter setting, Stark had the chance to remind viewers like me she knew her football and yes, she had aged well too.  Attractive, undoubtedly.  But hardly the bimbo ABC cast her as when they dumped her.

Eventually, she took on more prominent and demanding roles with NFLN.  And this week, she has come full circle back to both the showcase game she started at and the media conglomerate that allowed her to heal from it.

This should not be seen as a lack of endorsement for Kathryn Tappen, a similarly featured reporter who has stood out for NBC on NHL coverage they recently lost and who spelled Tafoya several times last year on SNF. Tappen is eight years younger than Stark and has shown more versatility with other sports, including college football and the Olympics.  With NBC committed to the Olympics for another decade, it’s entirely possible she may yet be teamed with Tirico on an even more prominent stage than primetime football. 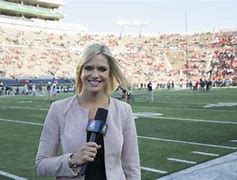 But for Stark, in her 50th year she can rightfully take a victory lap at being a real inspiration to the hundreds of female sportscasters who fear the idea of aging or misogynistic attitudes as being limiting.  She actually has more experience than Tirico in this particular venue, and can rival Collinsworth for likability without much effort.

I’m particularly happy that now I can see her more completely in a darkened house preparing for sleep rather than awakening early.  And I suspect her family will appreciate the improved hours as well.