Someone Else Finally Did That

Ten days short of 95 years ago, in a baseball stadium abutting River Avenue in the Bronx, New York, in the 154th game of their eventual World Championship season, Babe Ruth strode to the plate in the bottom half of what turned out to be their final at bat against Tom Zachary of the Washington Senators, with a man on in a 2-2 game. 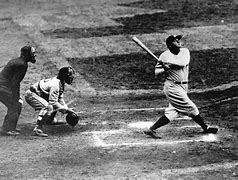 Ruth, who had baseball’s all-time single season home run record at 59, which he had set six years earlier in only his second season in New York, had tied that mark in the previous game against the original Nats with two home runs, #59 being a grand slam, in a 15-4 blow out over a Washington team that was more than 20 games behind the Yankees in third place on that September afternoon.  Ruth, arguably the most dramatic player of his era, was chasing history and himself exclusively when he batted against Zachary.  Seizing the moment, he powered #60 out of the four-year-old OG Yankee Stadium to break the ties of the game and the all-time single season home run record, securing the Yanks’ 110th win of the year, and in the celebration afterwards reportedly puffed on a fat cigar and exclaimed “Sixty!  Let’s See Someone Do That!”. Well, as most baseball fans know, several have done that since then, but all come with asterisks.  Roger Maris hit a 61st home run in the very same stadium 34 years and one day later, but he did so in game #162, a record that commissioner Ford Frick insisted come with an asterisk as this was the first season in MLB history with a newly expanded schedule.  In fact, he hadn’t hit his 60th home run until game #159 in Baltimore, so by Frick’s overprotective standards Ruth’s record through 154 games was still techically intact.

Since then, Barry Bonds and Mark McGwire did hit more than 60 in less than 154 games, and eventually Sammy Sosa joined them in eclipsing Maris’ 61 in a season.  But they had the benefit of performance-enhancing drugs, and perhaps a juiced ball, so there are many who disavow those accomplishments as being tainted.

Last night, in the Yankees’ 147th game of a 2022 season where they haven’t clinched a damn thing yet, Aaron Judge stepped the plate leading off the ninth inning of a game where the Yankees trailed the last-place Pittsburgh Pirates by four runs.  The same Pirates who had been swept in four games by the Mets over the previous weekend roughly 25 minutes in normal traffic down the Major Deegan Expressway and Grand Central Parkway. Judge finally became the someone who not only equaled Ruth’s total within 154 games, he did so with seven games to spare.  Even more importantly, the homer began an uprising where the Yankees continued to hit, eventually loading the bases for Giancarlo Stanton, the oft-injured home run threat who stands only an inch shorter than Judge’s imposing 6’7″.  Stanton allowed a true celebration to occur with a rocket-fast, game-winning grand slam that completed a five-run comeback, gave the Yankees an improbable 9-8 win, maintained their 5 1/2 game lead over the Toronto Blue Jays as they seek only their second AL East title in the last decade and allowed Judge, who was barely motivated to take a bow after #60 only pulled the Yanks to within three, to truly savor the moment and the magnitude.

The connections to the ’27 Yankees in last night’s comeback are eerie.  Both Judge and Stanton hit their homers off Pirates reliever Wil Crowe, whose great-great-uncle was Red Ruffing, a teammate of Ruth’s in later years and who was a Yankee ace during their successful pennant runs of the late 1930s and has a plaque honoring him in Monument Park.  And it should be noted that those ’27 Yankees completed their season with a four-game World Series sweep over–wait for it–the Pittsburgh Pirates.

The ’22 Yanks have yet to win a post-season game, and they’ll need every bit of offense from Judge, Stanton and others to do so.   Their pitching has struggled of late; even ace Gerrit Cole gets hit, and their bullpen faltered last night in allowing the Bucs to have a four-run uprising in the 8th inning to put them into the hole that their twin towers of strength bailed them out of,  Houston’s staff, as we wrote yesterday, is outstanding.  Tampa Bay has some impressive young arms as well.  Should the Yankees make it to their first World Series since 2009, the likes of the Mets, Cardinals and Dodgers potentially await.

But last night, in a glorious coda to a summer of memories, Judge woke up the echoes and matched the Ruthian accomplishments of nearly a century earlier, and with seven games to spare.  For Yankee fans, they’re hoping it’s the first of several past standards he will eclipse.  Maris’ 61 is within his grasp, and if it doesn’t happen tonight in the second of two games against Pittsburgh it could come against the same Boston Red Sox team that Roger hit his tainted record-breaker against in 1961.   And let’s recall that the 1922 Yankees were indeed pennant winners, though they lost an all-Polo Grounds World Series for the second consecutive year against their landlords, the New York Giants.  The next year, their first in the Bronx, the Yankees won the first of their 27 titles. There could be another Subway Series ahead, and such a chase will extend into November.  There’s an awful lot of baseball left before any of that is possible.  But with one timely blast, Judge reminded the baseball world, and his teammates, that the seemingly impossible is indeed possible.  Stanton picked up the mantle (pun intended), and reinforced that.  And despite empirical evidence to the contrary, the road to the post-season may once again go through the Bronx, just like it used to nearly a century ago.