School’s Back In Session

My new friends who live and breathe USC Trojan sports are over the moon today.  Practice for the upcoming season began yesterday; the first time its retooled roster under its expensive new coach Lincoln Riley took the field.

College football in 2022 is entering uncharted waters, as de facto free agency is now in effect and programs like USC, storied in tradition but mired in mediocrity of late, are uniquely poised to take full advantage of the market and the fan base like that which my new friends offer to lure blue chip talent to them.

Exhibit A is Jordan Addison, who faced local and national media for the first time yesterday.  As The Athletic’s Antonio Morales brilliantly reported:

There’s no more high-profile addition than reigning Biletnikoff Award winner and Pitt transfer Jordan Addison, who caught 100 passes for 1,593 yards and 17 touchdowns for the Panthers in 2021.

Addison’s decision to transfer was met with a ton of blowback (particularly from Pitt coach Pat Narduzzi), some tampering allegations and unfounded rumors of grandiose NIL offers. Nearly two and a half months after his decision to transfer to USC, Addison met with the local media for the first time and addressed the matter.

“It was frustrating,” Addison said of the rumors, “but I wasn’t really too concerned with it because the truth always comes to the light. I knew what my focus was and my intent, so all of that was just outside noise.”

At one point, Addison even described the rumors as “BS.” He also said he didn’t speak to Narduzzi in the immediate aftermath of his transfer.

“Whatever they had to say, they can say it,” Addison said. “I appreciate them for giving me the opportunity to play at that prestigious institution, but it’s all good now.”

2. When asked what sparked the decision to transfer, Addison said: “My story was already written, and I’m just sticking to the script. It’s really just a feeling I had, and it landed me here.”

That “here” is USC, where Addison lifts the Trojans’ offensive ceiling and gives them a true No. 1 wideout.

There were no specifics offered about where Addison will line up on the field. He played a lot out of the slot at Pitt and could probably line up inside or outside for USC. Riley will surely come up with ways to get Addison involved in the offense. At Friday’s practice, Addison was also getting some work as a punt returner, so that could be another avenue for touches.

“Just the creativity,” Addison said when asked why he thought USC’s offense was a fit for him. “I feel like I’m already a creative wide receiver so just being in this offense is going to help me out a lot more,  especially with all the weapons we have.” 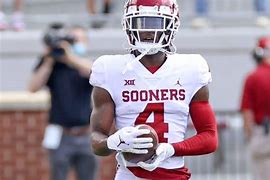 Addison’s arrival should take some pressure off of fellow receiver Mario Williams, who can operate as the passing game’s No. 2 target now, and the other wideouts who haven’t been the focal point of an offense before.

3. Addison, notably, was wearing the No. 3 USC jersey while conducting interviews Thursday and going through practice Friday. It’s a number that no Trojan has worn in 20 years — since Carson Palmer donned it and won the Heisman Trophy in 2002.

Addison said he’s worn No. 3 since high school and has stuck with it since he’s had success with that number. Palmer gave Addison his blessing to wear it this fall.

“That was a great conversation,” Addison said. “I don’t want to get into too much detail with it, but I’m just going to make sure he knows he put the number on the right person.”

It’s the first time USC has “unretired” a Heisman Trophy winner’s number since Darnell Bing wore No. 20 as a true freshman in 2003. That jersey number belonged to legendary USC tailback and former athletic director Mike Garrett.

As noted earlier, Addison is the reigning Biletnikoff Award winner, so he’s proven more on the field at this point in his career than Bing, who was a high-profile recruit, had at that time.

And yet…with all of this awaiting, there’s nary anyone that thinks USC has a snowball’s chance in hell of winning the national championship this year.  Alabama is simply leaps and bounds better than almost anyone, with defending champion Georgia perhaps the closest rival and Ohio State an outside shot.  Even my most passionate new friends think that a Rose Bowl victory, and 11-12 wins, will be sufficient.

CBS Sports projects that the Trojans will vault from the 85th best program in 2021 to #12 this year, by far the largest year-to-year gain of any FBS team.  And with their imminent move to the Big Ten, it may be one of their last attempts to actually play in a traditional Rose Bowl and capture a win of significance.

We’re now less than a month away from the season opener, and the early schedule looks reasonably easy.  Aside from an early road test at Stanford, it’s likely that USC will be a top 10 team for the early going at least.  At least they’ll be in the conversation for the CFP.  Which is a lot more than they were last year.

Pyrrhic?  Perhaps.   But I’ll be watching nonetheless.  Hopefully, with these new friends in person.  Hint hint.