Time was in-season college basketball tournaments were petite and prestigious, basically limited to the week between Christmas and New Year’s and mostly contested over two consecutive nights, with only a handful of them even featuring a consolation game on night two, the reward for the first night’s losers being an early flight home or a chance to watch the winners compete for trophies and glory.   Some better teams would venture to New York City for the Holiday Festival, Midwest teams to Kansas City for the All-College Tournament; a few other regional ones would attract more concentrated levels of interest.

But that was all before an era where participation trophies were awarded for generations of younger players prior to college, and the demand for live sports on TV grew with the growth of cable TV, especially ESPN.  And, forty years ago next month, Chaminade proved anything was possible if you caught an opponent at the right time.

In December, 1982, the Virginia Cavaliers were the #1 team in college basketball, led by two-time Player of The Year Ralph Sampson, and had come off a resounding win over the Georgetown Hoyas in what was billed as “The Game of the Decade” earlier in the month and a successful quicky foursome goodwill tourney in Tokyo as undefeated and the undisputed best.  Also on that team was future NBA coach Rick Carlisle and backcourt king Craig Robinson (no, not the one who played for Princeton at the same time whose sister Michelle eventually became the First Lady).

On their way back from Japan, the Cavs had hoped to schedule a game against Hawaii, but couldn’t work out logistics, so they scheduled what they believed would be an exhibition-like tilt against Chaminade, an NAIA team with some success in their own world but who had lost two previous years’ tilts to UVA .  Chaminade was 9-1 on December 23, 1982, but their loss was to Wayland Baptist.  But under the determined Merv Lopes, they devised a unique strategy capable of taking down both the literal and figurative giants they were facing.  As Wikipedia recounted: 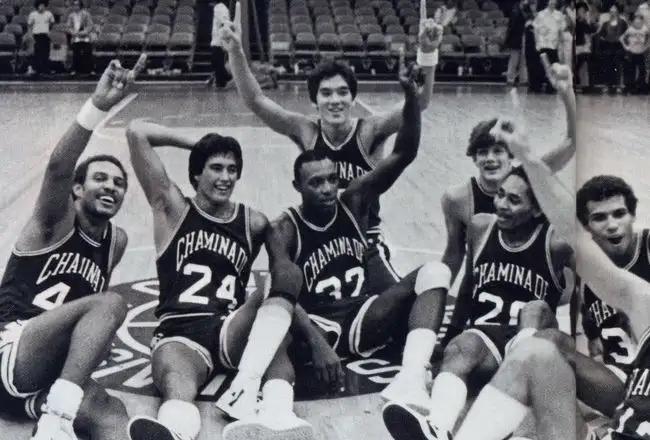 The game was held at Honolulu’s International Center with 3,383 people in attendance, less than half of the arena’s capacity.[10] The opening tip took place at 7:40 Hawaii–Aleutian Standard Time.[17] In the opening minutes of the first half, Chaminade controlled the tempo of the game.[18] According to sportswriter Alexander Wolff, who viewed footage of the game, Chaminade did not attempt to hold possession of the ball for long periods on offense, and often sought to advance quickly up the court after Virginia baskets.[6] Michael Wilbon, a writer for The Washington Post who was in attendance, reported that Chaminade’s offense mostly consisted of jump shots away from Virginia’s basket.[19] Defensively, the Silverswords focused on guarding their own basket, in an effort to stop Sampson.[6] They attempted to surround Sampson with defenders when he received the basketball;[5] they often used two or three players to guard the Virginia center.[1] Their primary defender against Sampson was Randolph, who gave up 10 inches (25 cm) in height but had familiarity with Sampson, having faced him in high school.[6]

And it worked like a charm.  Chaminade emerged with a 77-72 win that barely made that night’s late ESPN SportsCenter, with a shocked]Chris Berman, getting cues from off camera with the report hot off the wire, telling his sparse audience “We can’t tell you what happened, but the No. 1 team in college basketball has lost to—we don’t even know who they are.”[25].

Eventually, Chaminade became a regular host of major college teams seeking a holiday getaway, and won more than a few of those games, twice against Louisville.  The NCAA saw gold, and created the Maui Invitational, with Chaminade hosting seven other schools, which was eventually moved up to pre-Thanksgiving and, having returned to staging in Hawaii for the first time in 2019, has now outgrown even Chaminade.  And these days the Maui (Jim) Invitational, while it does acknowledge which teams finish first, third, fifth and seventh, is technically an MTE– a multi-team event, where each team is guaranteed to play three games, often against teams they would never compete against in normal conference and geographic schedules.  The quadruple-headers start in early morning and end well into the evening, guaranteeing full days of action for event-starved networks.  And they’re now no longer limited to venues as exotic as Maui., The Phil Knight Legacy, for one, now encompasses three arenas in the Portland area, and sixteen different men’s and women’s games.

And this week, it reminded that #1 can not only go down early, but it can go down twice.  North Carolina lost both to Iowa State and, this afternoon, to Alabama, in a thrilling ABC game that became only the second game between top 20 teams in history to reach four overtimes, with the #18 Crimson Tide prevailing 103-101.  In a third place game.  WIth the seventh place game extending well past 1 AM Eastern, in a night session that followed the awarding of the “championship” to Purdue.

And this was only Thanksgiving weekend.  There will be plenty more tournaments before the New Year, including another eight teams in Hawaii that will feature Rick Pitino and Iona schlepping from New Rochelle to the islands for Christmas, which has to be an upgrade.