It’e easy to assert that the Buffalo Bills’ first few days of this year have been unlike any other week than any other team in NFL history has had to endure.

After the shock and heartbreak of seeing their young defender Damar Hamlin fall to the ground after making a first quarter tackle on Cincinnati receiver Tee Higgins early in the first quarter of a crucial Monday Night Football event, and then standing their ground with an inexplicably tone-deaf NFL and essentially forcing their hand in suspending, and eventually cancelling, the game outright, they went through the motions of preparing for their season finale against the New England Patriots because, well, the league wasn’t going to actually cancel TWO games, would they?

But, miraculously, Hamlin not only survived what later turned out to be a heart-related issue, but ultimately recovered enough to remove his tube, begin communicating and, just before kickoff on Sunday, FaceTimed his teammates and encouraged them to win, thereby assuring them the #2 seed in the AFC and the possibility of two home playoff games.

They won the coin toss, and then the ball wound up in the hands of perhaps the team’s most unlikely hero apart from Hamlin himself, recent acquisition Nyheim Hines.

Buffalo got the scoring started right off the bat thanks to a trade deadline acquisition GM Brandon Beane brought in to stabilize the teams’ kick return duties while adding depth at the running back position.

On Sunday, RB Nyheim Hines made good on the returns on that deal.  Literally.

It started on the opening kickoff to the game, when Hines took it 96 yards to the house for a touchdown at a max speed of 21.25 mph which was good for a career-high carrying.

And it didn’t end there.

If you might be wondering how Hines could top a game-opening 96-yard kickoff return for a touchdown? How about a 101-yard return to give the Bills another lead yet again in the third-quarter…

And if you think the stunning result of this weren’t somehow as heaven-sent as Hamlin’s recovery, compare your reactions to those expressed by the Bills’ star quarterback Josh Allen in the aftermath of what turned out to be a 35-23 victory over the Pats:

“Obviously, that first kickoff, and you couldn’t have scripted it any better man, that one was pretty emotional. Just the way it happened,” Allen said during his postgame press conference. “You want the truth? It was spiritual it really was. Bone-chilling like, it was special” 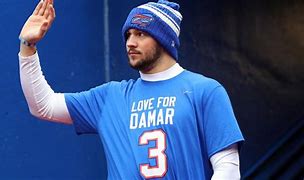 While sharing how he’d just been told it’d been 3 years and 3 months since the Bills last returned a kickoff for a TD, Allen became visibly emotional, per Hamlin’s jersey number three.

And when asked where the memory ranked in his memory of experiences, he opened up further, saying “I can’t remember a play like that touched me like that, I don’t think in my life. So it’s probably number one.”

Two special teams touchdowns for a Buffalo team by a player whose first name begins with the letters N-Y.

The second one even longer, just to prove the first wasn’t strictly a fluke with the same gods that spared Hamlin working overtime.

About the only thing these Bills lost through all of this, besides a few nights of sleep, was the potential to host a championship game against Kansas City.  While the Chiefs do get the number one seed, should these two teams meet on January 29th in the AFC championship game, it will be at a neutral site, as both teams had three losses and the Bills did not get a chance to tie them in at 14 wins and win possible tiebreakers.  (Suggestion:  Los Angeles might make a great compromise, eliminating any potential geographic bias and providing fans who do travel (and both teams’ fans do travel well) the chance for a warm(er?) weather climate and the elimination of playing conditions being a significant factor.  Anyone who saw the way the planning for tonight’s College Football Championship Game or last year’s Super Bowl can attest how well this city can host visiting teams for a big game). 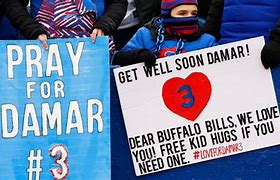 Although, judging by the site of the fans in attendance not only in Buffalo, but almost anywhere else around the league, it’s pretty clear that even the hosting city will include a whole lot of Hamlin fans, making the Bills an emotional choice no matter what.  Kansas City’s really good, and we know what happened when they faced each other in the 2021 playoffs.  But that was then.

All these Bills have to do is run it back again.