If you’re in the vicinity of the Los Angeles Coliseum tonight be prepared to invest in earplugs and a good pair of walking shoes.  There will likely be loud engine noises and street congestion both inside and out as NASCAR kicks off its 2022 season with the relocated Busch Light classic that has historically served as the sport’s de facto pre-season being conducted inside the iconic football and track and field venue.  The 150-lap race will be preceded by a Pit Bull concert and interrupted after the first 75 laps by a performance by Ice Cube, both of which will be held under the lit torch that typically is reserved for Olympic games celebrations.

Suffice to say, this isn’t gonna be Daytona or Talladega.  Or even Watkins Glen.

FOX Sports, of course, is the driving force (pun intended) behind this event.  For decades this was reserved for the Daytona Speedway, in effect giving the Space Coast a full week of ribald racing, partying and yes, drinking (this is sponsored by Busch, isn’t it) leading up to the season-opening Daytona 500.  I had my crash course (yep, another intended pun) in how special NASCAR is to its fan base, and the sponsors affiliated with it, when I was pulled into numerous projects by The Speed Channel when FOX took over the struggling motorsports-centric channel in the early 2000s.   For this New Yorker, spending time in this world was as much of an education as any I’ve gotten as both a sports fan and media savant.

At the time FOX Sports invested in NASCAR, it was at a crossroads.\  Historically a rural-centric, family-controlled business, FOX was obsessed with updating its production values and broadening its audience.  FOX Sports czar David Hill, of course, had revolutionized the presentation of football in two iterations and continents with such innovations as the “FOX Box”, which provided a constant on-screen score/time graphic, and the placement of boom microphones on the fields of play to take full advantage of the growth of stereo in both digital transmission and the sets receiving them.  Among the innovations Hill and his minions brought to NASCAR were in-car lipstick cameras, color-coded graphics that identified the top drivers at any time electronically across the top of the screen, and a “laser pointer” graphic that could pick out a car from a wide shot of a congested field.  The sport had never looked better, and its fan base loved it. 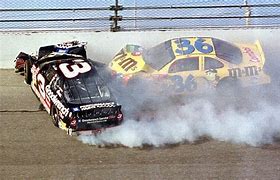 Then on February 18, 2001, during the last lap of the Daytona 500, the legendary Dale Earnhardt was killed after running into a retaining wall after making contact with Sterling Martin and Ken Schrader. At first blush, it didn’t look like a very serious crash.  FOX, in fact, heavily focused on crashes in its promotion, some of which I participated in the testing of.  It resonated in similar fashion to NFL linemen and NHL defensemen making contact with their opponents.  NASCAR is only a contact sport when wheels and doors swipe each other.  But a few minutes into the post-race celebration, an announcement was made that still sends chills through longtime fans.  “We’ve lost Dale Earnhardt”.  We later learned the impact of that to longtime fans was equivalent to Michael Jordan suffering a fatal heart attack after a game-winning jump shot.

So a great deal of the work I did was dedicated to casting a wider net for the NASCAR audience base.  Newer fans were less likely to be in mourning and, theoretically, more upscale.  A quick look at NASCAR’s demographic peaks and valleys confirms this.  It overindexes with 35-64 year olds, households earning $50,000-$100,000 per year and geographically in the Midwest and South.  It significantly underindexes in the Northeast and West.  Not coincidentally four of FOX’s six largest owned-and-operated stations (read that as their profit centers) just happen to be located in those parts of the country. nd its concentrations of Black and Hispanic audiences are roughly two-thirds the proportions of the U.S. populations as a whole.  Those facts are as true today as they were then.

So when the Super Bowl was moved up a week to accommodate the expanded NFL schedule this year, thus breaking up the Daytona Week concept, FOX saw a window of opportunity to attack both their geographic and ethnographic challenges.  Doing a race in downtown Los Angeles was ambitious enough (the area’s NASCAR track is located in Fontana in the Inland Empire, which is effectively the heartland of America).  Doing a race inside a football stadium was inspired but unprecedented–several races have been conducted previously inside college football venues, and the NHL has had some success with outdoor games inside baseball and football stadiums, particularly on New Year’s Day.  Doing both of these things during Black History Month?  Opportunistic.

Aside from the inherent challenges of demography and geography, the sport’s peak events typically occurs on weekend afternoons and occasionally in prime time.  Weeknight prime time, which is the premium advertising daypart for cable networks, does not accommodate a sport for weekend warriors (ask anyone at the NFL Network about this and they’ll grudgingly agree).  My management colleagues looked to fill the void with entertainment-inspired options including talk shows, documentaries and even game shows.  The nadir of this strategy was the 2004 series I WANNA DATE A RACE CAR DRIVER.  This is how it was described on the channel’s website:

Fans from across the country have been sending in three-minute videos explaining In whatever manner they choose, why they deserve a chance to date a racer. From those tapes (and tapes recorded a multiple times) drivers and a small group of their friends, family members, crew members or someone else of their choosing will select four contestants. As these contestants will then compete for a date.  Each show consist of three outrageous events that determine the overall winner. Events will be developed based on the driver’s “wish list” of what he or she is looking for in a potential date. The contestant’s ability to complete and win these events will determine who goes on a date however, additional scoring twists could be added later on.

Would you be surprised to learn it didn’t work?

So FOX passed on the concept of a single-sport cable network, eventually turned Speed (they dropped the “channel” designation as multiplatform presentation emerged) into the broader-based FOX Sports 1, and now is focused on ways to maximize the live events.  Using Ice Cube and downtown Los Angeles on a Sunday evening in February isn’t without its challenges.  But it’s many steps up from I WANNA DATE A RACE CAR DRIVER.  I think.