If I’ve learned anything about Canada during my many visits there it’s that they work on a front-loaded schedule compared to us ‘Mericans.  Their independence day is three days earlier than ours.  Their Thanksgiving Day is roughly six weeks earlier.  And their pro football season begins in June.

Or, at least, it does once again.  After a cancelled 2020 and a shortened 2021 campaign due to COVID, last week the 2022 season once again kicked off shortly after Memorial Day, and provided football-crazed fans like me actual competition in stadiums with more than 1000 fans in attendance (sorry, USFL, I’ve grown a little tired of seeing the empty stands). 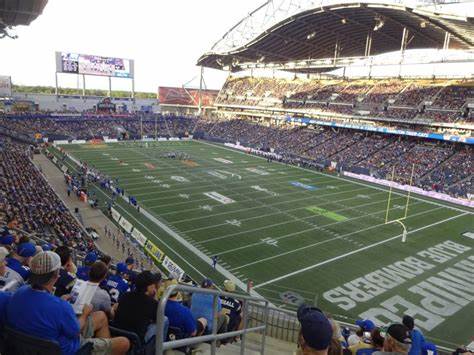 The game’s just a little bit different,  The field is substantially wider.  The end zones are deeper.  They get only a maximum of three plays to make a first down.  And they have an additional 10 yards of playing field to make a touchdown.  There are two 50-yard lines, with the 55-yard middle marked with a “C” for “Centre Field”–and, yes, that’s the correct spelling.

And it’s a much, much simpler league to follow.  There are exactly the same number of teams in their league today as there were when it was created in 1958–nine.  Four games are played each weekend, on some weekends one game per day from Thursday-Sunday are played.  Each game is therefore nationally televised, these days mostly on TSN, the ESPN of the North.  Which means one of the ESPN networks, as well as ESPN+. carries these games live.  And since their games air with the TSN branding, we get to take the same trip to a different but familiar country that I did.

I had the chance to attend a CFL game live when I was working in Vancouver one beautiful summer long ago.  The B.C. Lions played in the domed stadium that was once home to an Expo.  It looked very similar to the Kingdome in nearby Seattle and sits in a similar downtown location near water.  I never cared much for the Kingdome and B.C. Place was no better.  The weekjnight game I saw was sparsely attended and the dimly lit environment hardly helped make it more exciting.  I can’t recall who played but I do know the Lions lost.  But as I always had associated football Lions with the color blue seeing the black and orange colors of these Lions coaxed me to buy lots of souveniers.  Back then, I could afford them.

Several years later, the league attempted to expand into the United States.  For several years in the mid-1990s they targeted disenfranchised cities who had once been successful with the original USFL and/or the NFL, such as Memphis, Sacramento, San Antonio and Baltimore.  Only the Baltimore Stallions gained any traction, and when the Cleveland Browns announced they were moving there in 1996 the south of the border expansion attempts ended.  The remnants of the Stallions franchise were redeployed to Montreal, where a new version of the Alouettes were created.  In 2014 a new Ottawa franchise was added to replace the one that had folded several years earlier.  Beyond that, the league has had remarkable stablity in its limited but eclectic fraternity.

In fact, the only other change of note occurred with its own version of the Washington NFL name controversy.  The Edmonton franchise has been known as the Eskimos since their inception, though during the 2010s as the controversy about the name grew in similar ways to the Redskins’ plight the nickname was downplayed.  During lockdown the franchise quietly changed their name to the Edmonton Football Team.  But before they played a down on the field, last year they were rebranded as the Edmonton Elks.  Yes, you can Fear the Deer there, too.

By the time the NFL season starts, even my interest in the CFL tends to wane.  Games are usually relegated to the likes of ESPNews, sometimes not even there.  Yeh, I’ll pay attention on Grey Cup weekend, which typically occurs on American Thanksgiving weekend, when there are three fewer Sunday games played.  But other than that, it’s a summer fling.

I missed pro football in June the last two years.  Minicamps simply can’t do it for me.  I caught a couple of games this past weekend, and now that the NBA season is done I’ll likely check out a few more. Beyond that, no promises.  But it’s sure nice to have them back when I need it most; and this summer, more than ever.