I have the ultimate love-hate relationship with Philadelphia.  This morning, more than ever.

My family lives halfway between there and New York City, so whenever I’d visit I’d see TV news from both cities.  I got to appreciate and understand why Jim O’Brien is as beloved by their ABC-owned station as Bill Beutel was to his.  I’d be as facile with the morning rush hour crawl on the Sure-Kill as I was on the LIE.  I knew enough to know what’s a really good cheesesteak and why (and, honestly, there’s almost no completely wrong answer for which South Philly landmark you prefer).

And I’d always see how red-hot rivalries between the two cities’ sports teams are covered from both sides.  And it’s pretty clear that most Phillies fans despise the Mets, and vice-versa.  This year, both teams are looking to rebound from disappointing seasons, and they met for the first of 19 times last night at Citizens’ Bank Park.

The 2022 Phillies are built on pure power and intimidation much like the Yankees attempt to be.  Considering they have ex-Yankee skipper Joe Girardi as manager, that’s not surprising.  In Bryce Harper, Nick Castellanos, Rhys Hoskins and others, they have built a formidable hitting lineup not rivaled by many other teams, in direct contrast with the pitching-centric Mets. 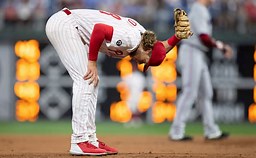 So when the Mets broke out to an early lead off 2021 surprise reliever-turned-solid-starter Ranger Suarez, things looked encouraging.  Alec Bohm, a third baseman who had had success against Mets starter Taijuan Walker, made three errors in helping that 3-0 lead cement, leading to a viral video of him muttering “I f—in’ hate this place” going out during the game.  Naturally, online Phans were apopletic.  One can only imagine devout Mets fan Jerry Seinfield mocking him with something akin to “Alec BOHHHHHHHHHHHM!!!!!”.

3-0 became 4-0, and as the game headed into the eighth things looked pretty good for the Mets.  Despite Walker leaving the game early with an apparent injury (there goes my two-start fantasy slot?), the bullpen was solid.  But when Kelso, Washington native Trevor May had to leave early with a possible injury of his own, the Mets had to go to Joely Rodriguez, a late acquisition from a rare Yankee trade who is typically a situational southpaw choice, in a key hold situation, and he got hit hard.  He got two outs but allowed a two-run shot by Bohm that effectively served as his redemption.  Seth Lugo was no better tonight, so when Ex-Yankee (noticing a pattern) Didi Gregorious stroked a double off Lugo to give the Phils the lead they didn’t relinquish, it all seemed like destiny.

Yet another tense bitter moment between the two intertwined franchises. Both blew significant late-season leads toward championships–the Phillies blew a 6 1/2 lead in the National League in 1964 wt. 10 games left, the Mets a 7-game lead in 2007 with 17 games left to–the Phillies.  There’s that 26-7 whumping the Phillies gave the Mets in 1985 where two different Mets relievers each gave up 10 runs apiece–and the fact that even in the Mets’ most successful year ever, 1986, the Phillies had a winning record against them, sweeping a late-season series denying the Mets the chance to clinch their division title on their turf.

On the other hand, Tug McGraw helped each of us win our first world’s championship.  And both are excellent markets to work in, and frankly, for the chance to work there I’ll even deal with yesterday’s decision that Philly was reinstating indoor masking, becoming the first major U.S. city to reverse course in dealing with the endemic.  It;s a good thing the Phillie Phanatic works outdoors. 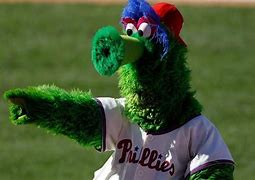 Three more games this week.  And let’s not forget the Phils now have Jeurys Familia, former Mets closer, in their bullpen arsenal.  Had the Mets mounted a rally of any consequence last night, Morning Call PA reported that Familia might have gotten the call, since he knows so many of the Mets hitters well.

As someone who rode many a roller coaster with Familia during both of his stints with the Mets, caveat emptor.

I love the Mets, but I love passionate fan bases even more.  Few cities have fan bases as rabid as Philadelphia’s.  It’s what fuels rivalries, ignites passions, and makes this whole trip around the sun worthwhile.

Even if after nights like last night I just say…Phuck it all.