Time was Tom Brady and Bill Belichick were not only the best at what they did on far more weekends than not –at least when they didn’t play the New York Giants in Super Bowls.  And they not were only masters at their craft, they also often benefitted from everything from their opponents’ stupidity to favorable referee calls.

— The Tuck Rule game of 2002, as recounted by Michael Hudson of FANSIDED: 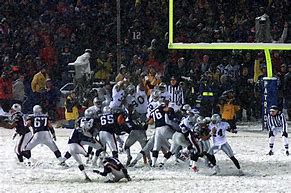 Down 13-10 late in the fourth quarter, Brady was leading the Patriots to a game-tying score before All-Pro CB Charles Woodson game in and sacked Brady, forcing what appeared to be a fumble. After review, referee Walt Coleman famously declared that Brady’s arm was going forward and pointed out the Tuck Rule as a reason for the pass being incomplete. The Patriots tied the score on Adam Vinatieri’s 45-yard FG in a heavy blizzard and won in overtime again on Vinatieri’s leg, with his chip shot 23-yard FG.

— The Butt Fumble of 2012.  The Jets’ Mark Sanchez become a poster boy for incompetence,  Just click on the link below…no words necessary. 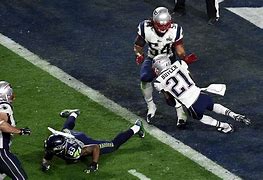 — Super Bowl XLIX in 2015.  With the Seahawks on the verge of a go-ahead touchdown with seconds remaining, on the Pats’ one-yard line, Pete Carroll inexplicably calls for a pass that winds up being intercepted by Malcolm Butler, a one-time Popeye’s employee who secured the Patriots’ fourth title.

Even after these two divorced after the 2019 season, both have remianed relevant, even through the first three-fourths of this season.  Both the Patriots and Brady’s Bucs held playoff positions going into yesterday afternoon’s late window games.  But in the later moments of both games, both saw self-inflicted reversals of fortune that at one time they were the benefactors of in the examples above that have materially impacted each teams’ chances to make it to the post-season.

In Las Vegas, in what even Patriots’ fans are describing as a gaffe upon gaffes, with one play remaining before overtime, after gaining 23 yards on a pass from Mac Jones, Rhamondre Stevenson decided to flea-flick to receiver Jakobi Meyers, who then attempted to flick back to Jones in a desperate attempt to somehow replicate the California stampede on Stanford aided by their band.  No band was in sight this time, but Raiders defender Chandler Jones (an ex-Pat, no less) wound up with Meyers’ errant throw and sprinted downfield for an impobable 30-24 Raiders win. 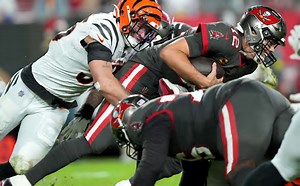 And down in Tampa, despite Brady’s solid first half effort where his Bucs seemed to gloat upon taking an early lead over the defending AFC conference champion Bengals, in the second half Brady looked every bit of his 45 years, throwing three picks and seeing Cincy QB Joe Burrow remind him of what he used to be, with Cincy scoring 34 unanswered points en route to a 34-23 win.

The Bucs are somehow still in first place in an anemic NFC South, but at 6-8 this represents the worst-ever record for a Brady-led team in his career after 14 regular season games.  All three other division members (Carolina, Atlanta and New Orleans) are just a game out with three games to play, and while none shake fear in anyone’s mind these Bucs don’t either.

As for the Pats, their loss has them on the outside looking in, tied with the Jets and Dolphins at 7-7 in a quest for the final wild card spot, with the division title out of reach after Buffalo’s conquering of Miami in the Saturday night snow of upstate New York.  Once again, anything is possible in this mad scramble, but somehow Belichick looked even more dour and downcast than he typically does.  And that definitely translates to a Patriots offense that, under Jones, looks confused and overmatched.

Since these storylines make for good TV, the fact that these legends are struggling to survive will undoubtedly help late-season ratings and, should either or both indeed make the playoffs, their respective chases for even greater legacies will prove to be great storylines.

But, somehow, after yesterday, those possibilities look a little dimmer.  And their Patriot ways are the biggest reasons why.