As my actual alma mater never has has a football team, I assign my passions and loyalties based upon how schools have affected me beyond being an alum.  In the case of the University of Miami, my love of them is dually inspired by two wonderful recent years I had teaching upper level undergrads spending a semester as visiting students in Southern California media law and management, and the fact that a special person once in my life was a very proud former student there as well. 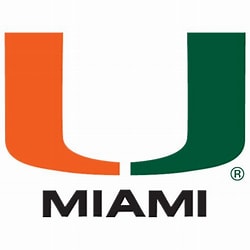 The “U” has a rich and storied history as an uncompromising overacheiver, particularly in years where they won national championships with a dizzying array of talents both on field and off,perhaps peaking in 2001 with what many experts consider the most talented football team of all time.  Between 1985-1994 the ‘Canes set the all-time record for consecutive home field victories with 58, including three post-season Orange Bowl wins on their home turf in the venerable downtown Miami stadium of that name.

But lately, Miami football has been struggling.  They haven’t won 10 games since they joined the ACC in 2004, and only one conference title in those 18 seasons, a 10-3 aberration under Mark Richt who was the most successful of a succession of four otherwise mediocre coaches who couldn’t hold a candle to the leadership Larry Coker provided for that 2001 national title team, nor predecessors like Jimmy Johnson, That’s why when they poached Mario Cristobal from Pac 12 powerhouse Oregon to come back to his alma mater and keep more of the supremely talented South Florida athletes in their home area (many not only went outside the state, but to Gainesville and Tallahassee as well), hopes were buoyant for a return to glory days.  This season got off to an encouraging start, and despite a tough intersectional loss at Texas A&M they still maintained a Top 25 ranking heading into yesterday’s homecoming with Middle Tennessee State.

MTSU fell into the category of lucky bastards, being paid $1.5 million plus travel costs to serve as a patsy for the U, as well as a homecoming for former Miami head coach Manny Diaz, now on the Blue Raiders’ staff, in exchange for a chance to spend a glorious week in what is perceived as paradise.  Florida natives know that isn’t quite true, but it’s certainly a step from beautiful downtown Murfreesboro.

Well, yesterday, storm clouds made the skies in Miami Gardens quite ominous; the game was delayed for 45 minutes by lightning.  And Middle Tennessee took out their frustration for not being able to fully work on their tans by taking an early lead and never being lapped.  Behind a 308-yard performance by quarterback Chase Cunningham, the Sun Belt Conference runners-ups of 2021 sent Cristobal down to his second straight loss, a 45-31 conquest that was a lot less close than that score would otherwise indicate.

Sure, other Top 25 college football teams lost yesterday, including #6 Oklahoma to Kansas State and #22 Texas to Texas Tech. (Texas Tech’s team is the Red Raiders; guess it was a good day for Raiders of any color),  Several others, including top 15 teams Clemson, USC and Cristobal’s former Oregon team came quite close to being beaten themselves.

But the way Miami lost, being so thoroughly dominated by such a weaker school, was particularly embarassing, and perhaps reinforced the dreaded curse of Hard Rock Stadium, which has denied both the ‘Canes and the NFL Dolphins anything close to the glory they respectively achieved in the old Orange Bowl.  And with yesterday’s weather proving to be a foreboding of the dangerous Hurricane Ian that’s due to hit South Florida this week, it’s clear those Tequesta Indians buried under the Miami Gardens showcase are raging again.  (I’m more than a little nervous about the Dolphins; chances against Buffalo later today for the same reasons),

Fortunately, the ‘Canes now have a bye week, and they’re yet to start their ACC schedule.  Perhaps this team can dust off this embarassment and rebound, perhaps even secure a decent post-season bowl,  But they do have several home games left on the way.  Those Tequesta ghosts gotta be calmed down.  That’s priority one, Mario.  Good luck.