One Last Bounty of October Surprises

It’s a huge day for baseball, as for the fourth time this year we will see four post-season baseball games occur on the same day.  And once again, entire seasons are on the line–just not necessarily the ones we thought.

Thanks to road wins earlier this week, and some impressive and timely home runs, two wild card teams, the sixth-seeded Philadelphia Phillies and the fourth-seeded San Diego Padres, are on the brink of turning the National League Championship Series upside down, each going up 2-1 in their respective Division Series against the teams thay squared off in the past two seasons’ NLCS’.

Thanks to a spectacular and declarative blast by power-hitting Rhys Hopkins, the Phillies, hosting their first championship series game since 2011, destroyed Atlanta 9-1 and have captured the fancy of an easily cynical fan base that had all but given up on them as they battled Milwaukee for the final playoff berth last month.  But with their power hitters now both healthy and prolific, and with starting pitching coming through, all of a sudden the Phils look, well, phormidable.  They;ve brought back the likes of Ryan Howard and Shane Victorino, two heroes of their 2007-2011 stretch of post-season appearances, and likely have the spirit of Roy Halladay helping from above to boot. 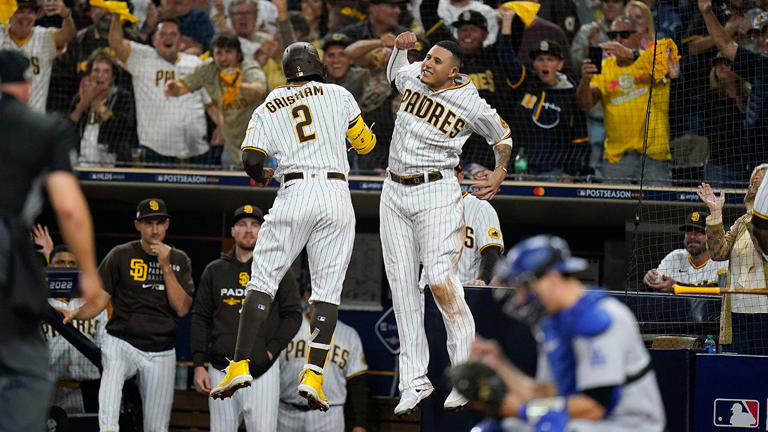 Meanwhile, with former Washington Nationals pest Trent Grisham, he of the .184 regular season average, continuing his somewhat unexpected post-season heroics (he did have 17 regular season home runs, so he’s not exactly this year’s Al Weis–Google it, young ‘uns), the Padres now find themselves one win away from their first NLCS since 1998.  With a fourth-inning blast off the Dodgers; Andrew Heaney, his third in six post-season games, the Padres’ pitching, especially their bullpen, made it hold up to secure a 2-1 victory before its first home playoff crowd since 2006.  And yes, doubters, an overwhelming percentage of them were indeed cheering for the Pads by night’s end, especially when now-recovered closer Josh Hader blew away the Dodgers in the ninth with 100-mile-per-hour heaters reminiscent of his dominance last year when he lead Milwaukee to the post-season, not of the messed-up gopher ball machine they acquired in exchange for their own disappointing closer Taylor Rogers just before the July trade deadine this paat summer.

Over in the AL, Houston will look to send the Mariners’ first home playoff crowd since 2001 into a chilly Pacific Northwest winter with a third consecutive win.  And in Cleveland, the Guardians all of a sudden have seized home field advantage from the Yankees, who now look extremely vulnerable.  With Aaron Judge now 0 for 8 with seven strikeouts at home so far this post-season, and with an already struggling bullpen heavily taxed from yesterday’s extra innings loss and facing two more consecutive days of pressure looking to bolster the fragile Luis Severino and what could be a bullpen game tomorrow, the Guardians’ faithful will be on the warpath (albeit no longer with an Indian drumbeat) despite the fact they will be the only game certain to occur tomorrow or Monday.

Many fans and observers see October as the best month on the sports calendar.  Weather has generally been good now that Ian’s come and gone, pro football’s remarkably competitive, hockey’s up and running, and the NBA regular season starts next week.  The MLS and NWSL playoffs join the party today as well.  But post-season baseball, with October surprises aplenty, still rules over all of it, IMHO.  And today may very well the capper of excitement from morning till night to underscore it.