March Madness is back, with no crowd restrictions in multiple venues across the country and, for the first time, a women’s bracket fully endorsed by the NCAA with similar bloating (68 teams) and branding to the men’s field.   So if you’re a hardcore gambler , a casual fan or even a non0fN just someone trying to fit in at the office (ahem–virtual office; yeh, yeh, yeh, virus, mask, STFU, yada, yada, yada), you may be taking more than a few minutes over the next few days to fill out your brackets.

You won’t be alone.  According to information released by the American Gaming Association, approximately 40 million Americans will fill out some 70 million brackets and invest roughly $9 billion between now and Thursday noon EDT.  Put in perspective, that’s more than double the estimate $3.9B that was wagered on the Super Bowl.  Approximately a quarter of that–more than $2B–will be invested in office pools, at a nominal average investment of roughly $29 a bracket.

And it stands to reason that the concept of brackets involving 68 colleges and universities from large cities and small and passions instilled from childhood, with 67 chances to pick a straight-up winner, offers far more opportunities for the thrill of victory than a prop bet on how long the singing of the National Anthem will take.  Via apps from virtually every significant sports and news platforms, we can click out predictions for entire fields in a manner of seconds.  In some cases, bots will even make those choices for you just like one would for a PowerBall drawing.  And there are lots more theories that can put into play with brackets than picking six numbers in a state lottery.

If you’re a basketball fan with a platform, it’s a chance to show your fandom and your knowledge.  While he was president, Barack Obama embraced the opportunity to show off his considerable knowledge each year on ESPN.  With a brother-in-law as a Division I coach at the time, he had more than a touch of insider knowledge at his disposal.   His bracket selections made national news, but as Rolling Stone reported six years into his presidency, his 29 percent accuracy rate in predicting Final Four teams would have virtually assured anyone who took his picks to their favorite casino or bookie would have lost money. 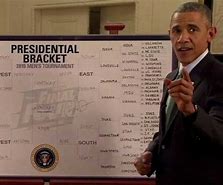 When they ruled morning drive time sports radio, Mike Greenberg and Mike Golic of ESPN made this week the unveiling of the “sheet of integrity”, the theory being that we tend to have “side brackets” but we have one that we put real money and, our integrity, on most.  Often, the side bet between the two would involve the loser having to get out of his comfort zone, such as notorious city boy Greenberg being forced to milk a cow or Golic having to oil up a la Kim Kardashian for a greeting card.

I’ve had some success using my own theories over the years, some steeped in having some knowledge about the game.  Double-digit seeds inevitably pull off upsets, particularly in games involving teams closer-seeded like 10-7  and 11-6.  10 and 11 seeds are often teams that either go on a run to win their conference tournaments with a three or four-win streak that has the potential to extend one more game, and 6 and 7 seeds are often regular season conference champions that get knocked off in the first round by a buzzer-beater that can prove to be an aberration.  At the top four seed level, that’s also true of 3 and 4 seeds that have a chip on their shoulders. In recent years, we’ve seen even longer odds prevail. 14 and 15 seeds have won several games, 11 seeds have made the Final Four, and even a 16 seed has won a game.

FWIW, my personal theory is that at least four or five of the 32 first (er, second round) games will feature a double-digit seed victory.  Predicting exactly which ones do prevail is the challenge.  In years where I’ve hit at least two of those dartboard throws, I’ve done better in my pools.  Lately, I’ve only won one, and that is usually accompanied by a “bracket blow-up”, meaning your Final Four choice gets upset and prevents your chances to score in later-round games.  Typically, a pool rewards correct predictions in later-round games with more points than they do in earlier rounds.  When a bracket gets blown up, you’re effectively reduced to a spectator.

And if your bracket does blow up, well, then you’ll be human.  The odds of predicting 63 games correctly, according to NBC News, is one in 9,223,372,036,854,775,808, which is 263.  And most brackets don’t factor in the First Four games added in recent years that actually precede the field of 64. You’re essentially given those for free if you wait until Thursday morning.  Last year, UCLA became the first First Four team to advance to the Final Four and yes, as a Bruins fan, I had that one.  This year, Notre Dame is in that Dayton field, so there’s a chance yet another rabid alumni base might have emotional picks that could defy odd (though I personally didn’t see much in ND’s lackluster play this year to personally think they could advance that far).   So now you may want to factor those games in the First Four into your accuracy odds.  Picking 67 winners have odds of one in 147,573,952,589,676,412,928.  Probably not gonna happen.    In fact, since the NCAA began tracking online submissions since 2016, no verified perfect bracket has ever been submitted.  Only one person, Greg Nigl of Columbus, Ohio, was able to accurately predict all 48 games through the first weekend of 2017.

We’ll assume he won his pool.  But if there is a secret to winning a pool, it’s having an outlier pick to win it all that somehow emerges as champion.  I actually won the 1999 pool I entered into at FOX Family by picking UConn to win in a year where many other choices were pundits’ favorites.  I spent a lot of time that year studying charts and stats.  I had recently been divorced from my first wife, I was at my heaviest weight of my life and I had enough money to spend on magazines and tip sheets to help me.  I can’t remember why I arrived at UConn; it probably had something to do with disliking Duke.  But I do remember I won over $1100.  I haven’t come close since.  I’ve seen people make selections based on uniform colors, nicknames, conference allegiances, alma maters of celebrities they were fans of.   When Maryland-Baltimore County scored the first-ever 16 seed win a few years back, a colleague of mine who grew up in Baltimore and was not a particularly passionate fan picked them; the only one out of more than 100 in our pool to do so.  His national champion choice was eliminated in the same round.    Karma.

I haven’t quite decided on my own sheet of integrity just yet.  I’ll save that choice for later this week.  I’d love to know yours, and why.  And be honest about it.  No reason to be, ahem, full of sheet.