Of queens and Queens

I’ll freely admit that for as passionate a sports observer I am, I am hardly the most informed on women’s basketball.  But when the Final Four of anything comes around, I take notice, and in the case of DI colleges I’ll sheepishly join the other grazers who simply don’t have the bandwidth or the depth of personal experience to follow it in detail year-round.

But I can appreciate great performances as well as anyone, and in watching the talents of South Carolina coach Dawn Staley and her leader, AP Player of the Year Aliyah Boston end the streak of championship game wins of the University of Connecticut at an almost unfathomable 11, I was once again reminded that I actually did have a strong connection and history with the sport, one within walking distance of my boyhood garden apartment that was arguably the closest connection I could have to those who grew up as gym rats and small town fans.

The Queens College Knights, whose campus adjoined that of my high school, were small college in every way except women’s basketball in the 1970s.  Prior to the NCAA officially embracing the sport and starting their own tournament 40 years ago, there was an organization called the Association of Intercollegiate Athletics for Women, the AIAW, which allowed teams from any level to compete for a national title.   The creation of Title IX, which in 1972 at last created a path for women’s athletics to grow at larger campuses, was the impetus for the eventual embracing by the NCAA.  But there was a ramping up period.  And in the earlier part of the 70s there were three schools that otherwise were small agate type that particularly thrived.

— Delta State of Mississippi, which took the title from Immaculata and won the next three AIAW tournaments from 1975-1977, led by the recently deceased Lucy Harris, a towering presence who arguably was the Bill Russell of her era, 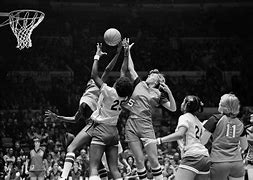 –And Queens College, Immaculata’s opponent in that Madison Square Garden game, and who made it as far as the AIAW championship game in 1973 but never did win the title.    I was at that Madison Square Garden game, and I also went to many home games at their bandbox on-campus gym.   The price was right (the on-campus games were free; IIRC the MSG game was $3 with my G.O. card).  Seeing athletic women in shorts while struggling through puberty had its plusses as well.  And considering my high school team went 0-13 and drew crowds in single digits. it was the best quality grassroots ball I could afford.

Those AIAW teams, like the Gamecocks last night, were driven as much by defense as offense.  Harris’ Delta State team notwithstanding, women’s basketball is generally lower scoring and more defined by takeaways and denials than three-point shootouts.  Last night’s performance off the boards by the Gamecocks was a thing of beauty.  Led by Boston and her game-high 16 rebounds (she averaged 17 in the tournament, they got out to a 22-8 lead over UConn and never looked back.  Destanni Henderson scored a career and game high 26 points to cement the historic win for Staley. 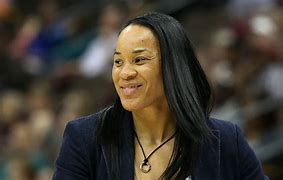 Staley, one of the WNBA’s first stars in the late ’90s and ’00s. became the first ever African American coach of either gender to win a second national title.   With a list that includes John Thompson and Nolan Richardson, and may include Hubert Davis by tonight, that’s especially impressive.  Beating Geno Auriemma head-to-head was also phenomenal.  With 11 national championships, six of which where the Huskies were undefeated, he is arguably the John Wooden of women’s basketball.Staley and the Gamecocks served notice that the torch is indeed inexorably in the midst of being passed, if it hasn’t been already.

But Auriemma will be back.  Unlike Coach K, he isn’t quite ready to step down; at 67 and 1149 wins he’s within two years of eclipsing Krzyzewski’s now-record 1202 wins on the men’s side to become the winningest male college coach of all time. And he’s in a pyrrhic battle with Stanford’s Tara VanDerveer, who is a mere eight wins ahead of him and at 69 still has much left in her tank.  Both schools have strong returning players; adding Staley into the mix this virtually assures the potential for many more exciting women’s final fours ahead. 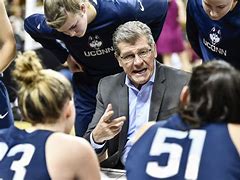 Knowing this, there is increasing talk that with this year’s embracing of the March Madness moniker by the women’s side, and the adding of the First Four level that made the women’s tournament 68 teams deep for the first time, the venue for future women’s Final Fours will be the same as the men’s, effectively turning it into a four-day weekend with as many as eight schools flocking to one location and having the ability to fill the stands with more fans and students.  It would certainly enhance the opportunity for media coverage and cross-promotion and might just lure a few more viewers to television, where it still reaches a fraction of the levels seen by the men’s games even now (Duke-UNC reportedly was seen by nearly 17 million people Saturday night, which would be the second most-viewed college basketball game of all time).

Frankly, the sport deserves it.  Fans like myself should not only be reminded, but they should also be admonished for ignoring players and coaches who perform more for their own satisfaction than the riches that await the winners.  Staley’s an example of what women can aspire to–a long pro career that translated into a decent financial windfall and a great second act; heck, she was wearing a $5000 Louis Vuitton letterman jacket last night.  That said, it’s a fraction of what men players and coaches make.  Title IX opened the door to equality 50 years ago.  Co-mingling the Final Fours would help expand that equality.  I’ll probably even know what Paige Bueckers looks like next year (FYI, she’s UConn’s top returning player).

The last time I recognized a women’s college player, it was Debbie Mason, the Knights’ star player in 1975, on the E train coming home from that MSG game to Queens.  She didn’t have on the same kind of jacket that Staley did; indeed, she was wearing a fleece-lined denim jacket that looked a little worn.  She deserved better then.  Today’s stars do now.