Not Ready For Prime Time Players

I’m very passionate about college football, and although my alma mater did not (and still does not) have a football team of their own I’ve grown attached to several teams through friends’ deep connections, as well as later employment of my own.

Two of those schools are both in the midst of their best seasons in years, both came into yesterday among the remaining undefeated teams and both had stiff road tests against other unbeatens with more consistent and recent track records of success.  Both had national broadcast television audiences on perfect autumn afternoons to showcase their talents and get the rest of the country to take notice, which, of course, I did yesterday.  Syracuse, the nearest college football school to my alma mater and UCLA, the school that employed me for eight years, were both on the air. 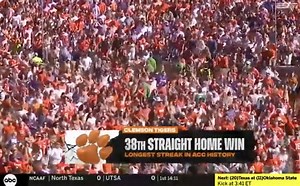 Syracuse, at 6-0 off to a better start than all but five previous Orange teams, went into Clemson’s Death Valley torture chamber and actually got off to a solid start, leading 21-10 at halftime. As Jim Stechschulte of THEJUICE.com reported:

SU had a strong first half performance, scoring twice and having another possession end inside the Clemson 30 on four first half possessions, not including one that started seven seconds before halftime. Before the break, Syracuse had 172 yards (averaging 6.88 yards per play), amassed 11 first downs, gave up one sack, and committed two penalties for ten yards, the second coming on a false start before downing out the clock.

The second half was an entirely different story. The Orange gained 119 yards (at 4.10 yards per play), earned six first downs, allowed four sacks, and were flagged eight times for 78 yards. Even though Clemson turned the ball over twice in the second half, SU could do nothing with that good fortune.

In perhaps a moral victory, the Orange’s strong start forced Clemson to replace its starting quarterback and onetime Heisman hopeful D.J. Uiagelelei with fellow Southern California high school phenom Cade Klubnik.  Klubnik led three second half drives that resulted in 17 unanswered points, and when Syracuse’s Garrett Schrader was intercepted as he tried for a winning score with 15 seconds remaining, Clemson remained undefeated and still has the inside track for the ACC title game and a potential college football playoff slot.

As for the #9 Bruins, their showdown with the #10 Oregon Ducks in Eugene was important enough for ESPN College GameDay to bring its crew to the pre-dawn raininess, even getting 86-year-old icon Lee Corso back in action to see his favorite mascot.  The rain cleared up, the Ducks’ own Heisman hopeful, quaterback Bo Nix, took charge early and that mascot got a great workout doing well over 100 pushups as his black-and-pink clad Nike lovers took down the Bruins, 45-30–no doubt endearing a whole lot of Trojans fans to him in the process.

So neither of my oars in the water were able to win their regattas.  Both will likely slip in the polls, but they’re both bowl-eligible, which hasn’t happened in every season for both of them of late.  Here’s a thought:  Since they represent significant fan bases in New York and Los Angeles, why not try and set them up as opponents in a bowl?

You know damn well I’ll figure out a way to get to that one in person.  Or at least pray that I can.