Sorry, Phillies fans.  The Ass-tros are very much alive and well in the 2022 World Series, and they delivered as emphatic and undeniable a reminder of that than almost any team in history last night.

Behind the mercenary-like efficiency of “El Reptil”, Cristian Javier, and three exceptionally effective relievers, Houston pulled even with Philly with a historic 5-0 no-hit shutout, only the second time in the 120-year history of the Fall Classic that a no-hitter was thrown.  Unlike Don Larsen’s masterpiece in Game 5 of the 1956 World Series, this one wasn’t a perfect game–there were three walks.

But, arguably, Javier’s performance was even more masterful than was Larsen’s.  He struck out nine Phils in six innings in November cold on the road, the same team that had lit up his teammates for five home runs just one night before.  Specialist reliveres Bryan Abreu, Rafael Montero and Ryan Pressly each followed up with a brilliant inning each to complete the effort, and turn what Philadelphia had hoped would be an emotional ride to a hometown clincher tonight into a must-win Game 5 against Cy Young candidate Justin Verlander before heading back to the antiseptic reality check of needing to win one or two back in Texas.

Astros skipper Dusty Baker was maligned for leaving starter Lance McCullers, Jr. in longer than most perceived his expiration date last night.  It was opined, somewhat ironically, that McCullers was tipping his pitches, karma considering he is one of the few remaining provocateurs from the 2017 trash-can clangers that picked up on signs from Yankees and Dodgers pitchers en route to their world’s championship.  But with a relatively fresh bullpen at his disposal, Baker pulled almost every string right this time.

And it’s not like this hasn’t happened before.  Indeed, Javier was the starting pitcher for another combined no-hitter earlier this year.  On June 25, Javier went seven innings and struck out 13 Yankees en route fo a 2-0 victory, which Hector Neris and, again, Pressly then finished admirably,  There had been both recent and historic precedence for this one as well.  In August 2019 the ‘Stros fired a combined no-hitter anchored by Aaron Sanchez in his first start for the team en route to a league championship. 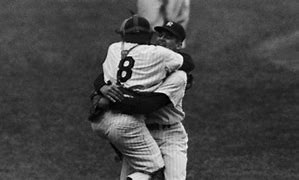 And in 2003, still a National League team at the time, the Astros utilized six pitchers en route to a 8-0 win against the eventual AL champions at the OG Yankee Stadium–hurling from the same mound which Larsen and Yogi Berra hugged in front of after what was until last night the only no-hit game in World Series history.

So what was heading toward anticlimactic has now become historic.  Philadelphia arguably delivered a potential knockout punch Tuesday night a la its prodigal son Rocky Balboa, but last night Javier and company responded like Apollo Creed and Ivan Drago combined.