No Victor For You!

My two favorite teams the Bulls (6-10) and Lakers (4-10) are in nightmares nearly twenty percent of the way through the season. Yet both are not in the same nightmare. 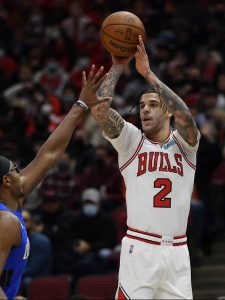 For the Bulls, they are in limbo with Lonzo Ball likely out for most, if not all, of the season thanks to the knee injury he suffered last year. That limbo is causing many fans to cry for the Bulls to tank so they can get the top draft pick in next summers draft.

For the Lakers, they are in limbo because LeBron James has too much power over how the team is run and this is running their season into the ground. This is causing a few of their fans to cry for the Lakers to tank and get the top draft pick in next summers draft.

You might be wondering why anyone would be talking about these two teams picks in the draft so early in the season. Well it is simple there is a basketball player in France who over seven feet tall and expected to enter the 2023 NBA draft. His name is Victor Wembanyama and he is expected to be drafter first overall with college players taking a back seat even to high school graduates who took a gap year to improve their game.

Why is this a nightmare for the Bulls and Lakers you ask?

Well, let’s start with the Bulls. Even if they were to try to tank to get the top pick they would likely not succeed if the other guys stay healthy and go without getting injured. They might come close to tanking enough to get a higher pick but they will likely not be bad enough to even enter the draft lottery. This would mean at best they could get the fifth overall pick and not only will Victor be gone by then but it is a stretch to expect the Bulls to draft that high without trading for a higher pick when they have a solid team on the court.

The Lakers nightmare is different because it is a three-fold one. First of all, they will likely get it together and make it to the playoffs. They may not go far in the playoffs but they will likely make it. Secondly, James wants the team to draft his son in 2024 so he can play the last couple years of his career with his son on the court. Third of all, and likely the worst part of the Lakers nightmare, their top pick in the 2023 draft will be going to the Pelicans because of the Anthony Davis trade back in 2020 that helped them win the title.

It would be amazing to see Victor Wembanyama playing for one of my favorite teams. However let’s be realistic and stop jumping on the bandwagon begging the the Bulls and Lakers to tank for a chance at the top draft pick because it seems literally impossible that either of them will stink it up so badly that they be in the draft lottery and that is the first step to getting the number one pick.

All I can do is watch the games and hope both of my favorite teams are back to full strength next season.