A lot of my friends around the country who have deep passions for their respective pro franchises have had some rough moments of late.  Friends in Atlanta are despondent over their Braves being dethroned as baseball’s World champions; more locally loyal fans of the Dodgers are still reeling from the utter collapse in San Diego that saw a record 111-win regular season go up in smoke at the hands of their longtime little brothers, the Padres.

And I’ll admit I had been in the doldrums along with them, with the Mets’ own 100-plus regular season made worthless at the hands of those same Padres last week, and with the Yankees (please, I respect their history, sue me) on the brink of elimination themselves after two consecutive upendings by the resillient young Clevekand Guardians.

But yesterday was a day fpr New York football fans to truly celebrate, one that is seeing both the Jets and Giants defying pre-season prognostications deep enough into a seaso to matter for the first time in years.

The Giants, fresh off a London win over the Packers, returned to New Jersey for a date with the Baltimore Ravens, the team that fired defensive genius Wink Martindale after last season’s disappointing end and allowed him to join Brian Daboli’s staff and provide key veteran stewardship.  With what could only be described as insider trading expertise, the Giants tormented Ravens quarterback Lamar Jackson late in the first quarter, first with an interception by Julian Love (the Giants’ first of this season) that led to a Saquon Barkley go-ahead touchdown, and then a Kayvon Thibodeaux sack (the first of his career) that set up a Leonard Williams fumble recovery that, along with Barkley’s shrewd decision to eschew the end zone and instead run out the clock, secured a 24-20 win that now has them at 5-1 qnd solidly in second place begind the still-unbeaten Philadelphia Eagles. 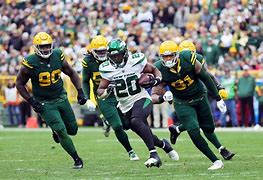 Meanwhile, the Packers returned to Wisconsin and were apparently still jet-lagged and vulnerable to New York teams.  The Jets dealt Green Bay their first home loss of the year, with rookie running back Breece Hall enjoying a second straight stellar game, rushing for 116 yards and a touchdown, and making short work of the Packers’ defense, with a blocked punt that led to a Will Parks touchdown that set the tone of a 27-10 conquest.  Perhaps the Packers should have worn throwback uniforms from a more successful period than the 1950-53 span that their otherwise dabber duds represented.  Those teams went a collective 14-33-1, by the way.  The current Packers are 3-3, while the Jets are a stunning 4-2

Put into perspective, it’s the first time since 2015 when both teams had winning records six games into a season.  Looking ahead, 2010 was the last time that both teams finished their seasons over .500, and 2006was the last time they both made the playoffs.  They both lost wild card road games on the same Sunday, janaury 7, 2007, and we’re admittedly far from that recurrence.  But to be halfway to Halloween with both teams being competitive?  Well, thats inspiring.

So the hangover opportunity for the Yankees was right there, and to his credit, newcomer Harrison Bader and $324 million ace Gerrit Cole stepped up and saved their season.  Bader hit his third home run of the post-seson (and his third as a Yankee overall), which proved to include the winning RBI, while Cole threw 110 pitches and shit down a Guardians team looking for yet another first-round upset.  Bader, a controversial deadline acquisition seen at the time as a defensive upgrade from Aaron Hicks, who didn’t even make his debut until September 22nd, is as unlikely a post-season hero as any seen in New York history.  Veteran announcer John Sterling now croons a century-old standard “I’m Just Wild About Harry” when Bader connects, with Yankee fans so giddy they’re willing to overlook how awful his rendition actually sounds.

So the Yankees do indeed survive for a winner take all game tonight back in the Bronx, both teams effectively deploying their entire bullpens as they play for the fourth consecutive day having completed a road trip in the middle.  Tonight’s winner gets the rested Astros Wednesday in Houston, and will be clear underdogs.  But hey, if the Giants and Jets can defy odds, so too could they.  Just getting the chance to do so would be a pleasant turn of events.

It still doesn’t take away the sting of the Mets’ collapse, and it’s not even up there with the absolute ecstasy of Philadelphia fans who have those unbeaten Eagles and the Phillies’ first NLCS appearance since 2010 to root for now.  Plus a full season of James Harden and the Sixers, who will kick off the NBA regular season tomorrow night against Boston.