The Seattle Mariners’ young catcher secured his place in that team’s history with a dramatic two-out pinch-hit home run that sailed into the misty T-Mobile Park night to secure a 2-1 win over Texas and, more significantly, their first post-season appearance since 2001.  And in doing so broke the current major team sports streak for consecutive years without advancing to the post-season.

Granted, it took the addition of a third wild-card to do so, and the 2001 M’s did win the American League West outright with a record 116 victories, breaking the mark set three years earlier by the New York Yankees.  But unlike those Yankees, who added 11 wins in the post-season to win their second World Championship in three years, the M’s were stalled by those Yanks in the ALCS, continuing their other streak as the only current American League team that has not yet advanced to a World Series–which is obviously still intact in their 46th season. 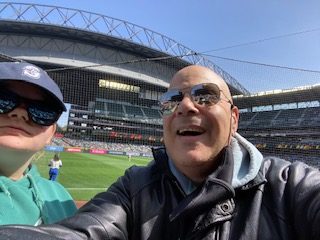 Its fan base is passionate and supportive nonetheless, and I had a chance to personally set it early this season.  This is a city and a franchise that is hungry for success, and with the likes of Raleigh, breakout rookie outfield Julio Rodriguez and a savvy starting rotation of the recently acquired Luis Castillo, 2021 Cy Young Award winner Robbie Ray and All-Star Logan Gilbert, they arguably have a Big Three that’s on par with any troika in the American League as they now set their sites on next weekend’s wild card run.

But the American League is chock full of young, hungry teams that will battle for the chance to take on the Yankees and Astros in the division series round.  The most likely scenario for the M’s will be a trip to Cleveland to take on the Guardians, the overachieving Central Division champions who may be the first sports franchise to win a title in their first year with a new nickname (the way things look in DC, it’s highly doubtful that the NFL Commanders will follow suit.)  The Guardians have a lineup filled with young, aggressive hitters that will be a true test for the M’s staff.

It’s also possible they may find their way into a showdown with the Toronto Blue Jays, who also have a young line-up of mashers, and who came into existence with the Mariners in 1977.  The Jays haven’t won much of late themselves, but they do have a World Series title in their rear-view mirror from 1993, won in walk-off fashion by Joe Carter much like Raleigh did last night.

Given the depth and daunting records of Houston and New York, the AL Wild Card contenders in general may only be competing for the right to be eliminated, particuarly with the prospects of a highly competitive and potentially taxing weekend series ahead.  The Mariners have momentum, but so do their competitors.  And they likely won’t have their home crowd cheering them on.

Which is all the more reason that last night’s walk-off, much in the manner that Martinez’ dramatic double in 1995 against those same damn Yankees that earned them their first-ever post-season series victory, was so sweet to savor.  Given the challenges the Seahawks have had so far this year, and with even Seattle FC struggling to make the MLS post-season, there may not be a lot of cheering ahead for Seattle sports fans this year.

But, at least for one glorious night two decades in anticipation, their fans can indeed celebrate, and at least have a chance at the elusive brass ring.