NOTE:  This piece has also been posted on our sister site.  http://www.leblanguage.net  Please visit it and share accordingly.

An awful lot of my friends and colleagues know far, far more about the specifics of the world of professional wrestling than I do.  With passions and opinions usually reserved for family or politics, they can debate the legitimacy and premeditation of any Wrestlemania from the last several decades, which talents were destined for their moments in the spotlight, and where they think the storyline leading up to the next pay-per-view event would evolve.  And no matter how much their financial or life struggles may be affecting them, they’ll somehow find the cost, even if shared, to be sure to be watching each and every PPV event live.  I marvel at their dedication, and honestly am at a loss to explain why. But they explain it succinctly–it’s entertaining and a hoot of an experience.  And the biggest reason for that, Vince McMahon, is now officially stepping away from the World Wrestling Entertainment business he built into a multibillion dollar global conglomerate, “retiring”  amidst a series of allegations that he paid $12 million to four employees as hush money for alleged sexual misconduct violations.

Make no mistake, Vince McMahon is the epitome of a mogul, and he’s an intriguing mash-up of several I’ve known personally and both admired and loathed from afar.

Like Ted Turner, he started by taking over a small family business in North Carolina that had regional success.  Jess McMahon’s Capital Wrestling first caught my eye when I was tasked with looking at media buying opportunities that successfully counterprogrammed Saturday Night Live in local markets.  When I looked at the rating books for Raleigh-Durham, North Carolina, one of the larger DMAs I bought time in at the start of my career, I noticed that Capital Wrestling was the highest-rated program of the entire day, regulalry delivering 10-plus ratings at midnight and beating SNL, even in its early heyday, by three and fourfold.  When the titling changed to WWF, I checked in with my representative to be sure it was the same show.  That’s how I first learned about the McMahons, how they were planning to go national via syndication, and how he planned to add showmanship and titillation.

The wrestling I knew growing up in New York was a popular Monday night staple at Madison Square Garden, with the likes of Bruno Sammartino heading cards that were questionably legitimate, inferior in both execution and demography to boxing.  The MSG crowds it would draw were usually blue-collar and redneck, atypical from the better-heeled that would walk a red carpet for Ali-Frazier fights.  But as the World Wrestling Federation shows began to take over, and the McMahon imperteur took root, the crowds began to become more attractive, better off and saw it for the escapist, populist soap opera it was.  McMahon embraced and emphasized the reality that scripted sports was ENTERTAINMENT, and eventually rebranded his company accordingly (with a little push from the World WILDLIFE Federation that successfully challenged his use of those initials in court).

So, naturally, when the syndication rights became available in several FOX cities I was responsible for programming, it became a personal priority for Rupert Murdoch to secure those rights.  We were able to gain rights to the secondary series in several markets, including New York; our competition still maintained rights to the more popular hour.  Many advertisers were still skittish to advertise locally, so we never put it in higher-visibility time slots like Saturday nights; besides, our competitor would often run their hout there, and McMahon wisely prevented his different shows from going head-to-head.  I knew that packaged goods companies’ skittishness wouldn’t offset the popularity, so we used it as a promotional tool for COPS and AMERICA’S MOST WANTED.  Surprised to hear they attracted similar types of viewers? 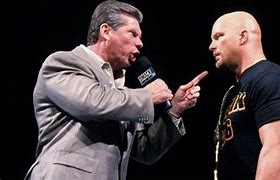 The explosion of WWE really happened with WWE RAW, which literally kept the USA Network in business for many lean years.  It eventually developed a beachhead on Monday nights, where even against Monday Night Football it would draw one of cable’s largest audiences.  When McMahon himself became a storyline, sparring with Stone Cold Steve Austin among others, he vaulted into the national spotlight as a celebrity.  The overlaps with other moguls then really took off.

He channeled Hugh Hefner in his embracing of using ring girls, many of whom were Playboy models, to add to the allure,  With one of the most popular shows among males 12-34, that was a natural.  Inevitably, it became a safe haven for Donald Trump; indeed, Trump named McMahon as an “adviser” on how to restart the economy, and WWE events, staged in bubbles, became some of the first “sports” events that returned to production as the pandemic raged in the summer of 2020. 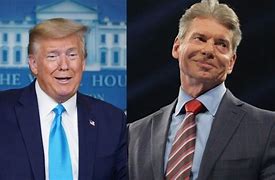 And then, perhaps even more inevitably, he became an accused predator like Trump, Harvey Weinstein,  Roger Ailes and Les Moonves.  He was able to survive allegations from male wrestlers that he encouraged steroid use that ruined their health, and survived the fallout from having several of them suffering debilitating injuries and even death from “accidents”.  But in today’s world, like a sobering number of his peers of a similar vintage, he couldn’t survive these allegations.

And clearly, the world of wrestling is changing again.  All Elite Wrestling has emerged as a formidable competitor, returning arch-rival Turner Sports to a truly competitive level not seen since the success of World Championship Wrestling in the early ’90s.  His attempts to mine a network  and a pay streaming platform out of the WWE library was not that successful; that ambition is now part of Peacock’s value proposition, a reward for keeping USA viable.  And at 77, it was arguably time for him for step aside.  His daughter Stephanie will now run the business, much as Hefner’s daughter Christie took over Playboy.  And yes, how the Corleones transferred generational power, too.

It’s hard to feel any remorse for the remorseless, particularly billionaires.  But besides questionale moral standards, McMahon shares the quality of ruthless precience and the ability to appeal to the masses with good vs. evil, energetic presentations, attractive actors and a “tune in tomorrow’ urgency that keeps people hooked like narcotics to his product.  If nothing else, such genius, even if it’s a tad evil, needs to be acknowledged, and perhaps even honored, as he leaves the ring.