And the sun rose this morning, too.  Captain Obvious, you’re in the limelight again.

Three NFL franchises chose to go for broke and make the moves necessary now rather than later yesterday.  At least two did not.  Guess which ones are heading into December with momentum?

— The New York Jets – On the heels of perhaps one of the worst offensive efforts in recent memory under the leadership of quarterback Zach Wilson, one where they averaged two inches per offensive play in the second half–the Jets ignored the financial and emotional ties to Wilson and installed Mike White as quarterback.  Granted, it was against a depleted Chicago Bears offense and White had other advantages such as home field and the game itself was played in a steady rain.  But what White most of all was the confidence of his teammates and coaches and, on that alone, he gave the Jets’ offense the shot in the arm they needed, incorporating at last the talented Elijah Moore and utilizing new running game elements including the all-but-forgotten Ty Johnson and newcomer Zonovan Wright in a 31-13 win. Were the season to end today, the Jets would indeed have a playoff berth for the first time since 2010.

— The Los Angeles Chargers–With their season teetering on the brink of relevance and starting at a seven-point deficit against a sub-par but feisty Arizona Cardinal team on the road, Justin Herbert finally took advantage of having a reasonably healthy array of receivers and led a drive to a late touchdown.  As Chargers.com’s Eric Smith detailed, there was no question in both players and coaches’ minds what would ensue:

The Chargers had trailed most of the game, including for most of the fourth quarter, when they faced first-and-goal at the 1-yard line with 18 seconds left.

Justin Herbert found Austin Ekeler for a 1-yard score to make it a 24-23 game, and there was little doubt the offense was staying on the field.

“I really believed in our offensive football team. I believed in our quarterback. I believed in the play call,” Staley said. “We executed it well the entire week and I felt like it would have good answers against the defenses they might play and we wanted to finish the game on our terms.” 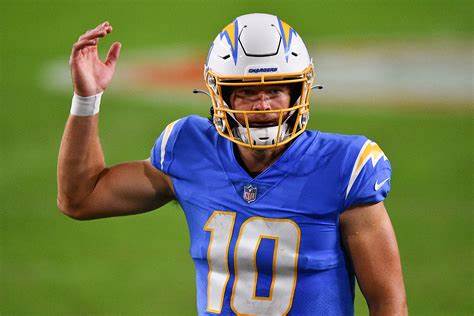 Herbert added: “I imagined that we were going to go for it, just because that’s kind of how aggressive we play and I love that about our coach. Didn’t know the exact play call, so I was just going to hear it and call it and we went with it.”

“I was holding it up, too,” Keenan Allen said with two fingers in the air. “We gotta go. We gotta go.”

That set up a brilliantly called and executed 2-point play as Herbert found Gerald Everett wide open for the points and a 25-24 lead.

“That’s the way it was schemed up … just trying to get the guy to overplay it, like he did,” said Everett, who initially went outside before juking his way to the middle of the field. “Justin gave a great throw and I just did my part.

The Chargers are just a game behind the Jets, and arguably have an easier schedule than them over the final six weeks.  A Los Angeles team might just make the playoffs yet. 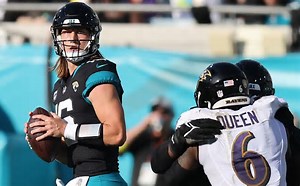 — The Jacksonville Jaguars.  At least for this year, the Jags aren’t heading for the post-season.  But the Baltimore Ravens still think they might, and had looked at this game as a cakewalk.  Until Trevor Lawrence stepped off and drove his team for a late score and then, like the Chargers, went FTW.  Proving he can indeed keep up with the Joneses, Lawrence connected with Marvin Jr. with 14 seconds and Zay for the two-point conversion.  That was enough cushion to prevent the game’s most prolific kicker, Justin Tucker, from connecting from 67 yards out to steal it away.  Baltimore, on the other hand, fell into a tie with the surging Bengals for the top spot in the AFC South, and will be hard-pressed to even make the playoffs in what is becoming an increasingly less-than-stellar season for free agent quarterback Lamar Jackson.

On the other end of the spectrum, there are the Green Bay Packers and Denver Broncos, who continued to trot expensive unproductive quarterbacks Aaron Rodgers and Russell Wilson out there, unlike the Jets.  Their offenses are modest at best; Denver has deteroritated almost to unwatchable levels.  Both teams are essentially eliminated from post-season contention, both appear resigned to keep their aging arms in the fold and attempt to buid out around them.  Perhaps the best thing that happened to either squad was an injury that forced Rodgers to the sideline in the second half and kick-started what should be the Jordan Love era.  Not quite yet on a full-time basis and, sadly, Russell Wilson remains physically healthy.

You try, you run the risk of failure.  But sometimes, you just gotta say “what the f–k”.  The Chargers, Jets ad Jags did, and they still have some excitement left.  The Packers and Broncos, not so much.

And now we head into December.  It’s cold outside.  But the NFL is just heating up.  FTW opportunties are diminishing.  It’s nice to see some teams want to try.