More Than Ever, A Coin Flip League

Three weeks into the 2022 NFL season, the league and media executives who crave parity are perhaps the biggest winners of the season so far.  For almost everyone else, there’s a mix of success and underachievement that has the league clustered in a way rarely seen.

As of this morning, there are only three teams that are undefeated.  Only one of them, the Philadelphia Eagles, can be conclusively seen as really, really good.  Yesterday they sacked their former quarterback Carson Wentz nine times in a 24-8 road rout of the Washington Commanders.  The still red-and-gold hued representatives of the nation’s capital are absolutely not a good team; their points were on a fourth quarter safety and a garbage time touchdown after the Iggles had taken their talons off the gas.  Yet, they’ve already won a game.

The Miami Dolphins are another, and yes, they took down what most pundits believe is the Eagles’ AFC equivalent, the Buffalo Biils, in an exhilirating 21-19 victory in the soon-to-be rain-inundated Hard Rock Stadium, despite nearly giving the Bills the game with what could arguably be called the mosy embarassing play involving a player’s butt since Mark Sanchez’ caused a fumble on an embarassing Thanksgiving night in New England.

The Miami Dolphins’ “butt punt” was among the talking points on Sunday night as the team defeated the Buffalo Bills to remain unbeaten and took sole possession of the AFC East.

One-time Pro Bowler Thomas Morstead was in his own end zone to punt the ball away for the Dolphins with about 1:37 left in the game. He didn’t really have enough space to boot the ball and when he lined up to punt, it was clear that Trent Sherfield was just too close to him. 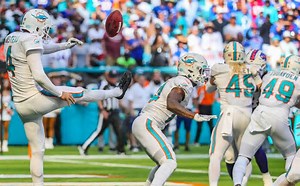 Morstead’s punt went off the butt of Sherfield and out of bounds. It was a safety for the Bills and they got the ball back with a little less than 2 minutes to try and make a game-winning play.

OK, I’ll take the wheel back.  The net effect of this play was that instead of blocking a punt in the end zone for a likely go-ahead score, the Bills got the ball back.  Quarterback Josh Allen relentlessly drove them downfield in a quest for a winning field goal, but with no timeouts and less than 10 seconds to receiver Isaiah McKenzie questionably tried to keep a quick pass route moving and did not leave Terminator-like quarterback Josh Allen enough time to spike the ball.  The reaction of Bills’ offensive coordinator Ken Dorsey, the former University of Miami QB calling the play from the stands of the same stadium he once played in, as captured by CBS was absolutely priceless.  Dorsey audibly cursed, slammed playbooks and disconnected webcams in disgust, leaving viewers with a snowy screen.  No doubt this display was ti the delight of the exceptionally passionate and beautiful Fins fans who cheered on with their Sunday sauce and bruschetta, and who likely also gave thumbs up to Sherfield’s trolling tweet:

“My cheeks have a big W tatted on them,” he wrote.

And yet, these Fins are still unbeaten, and a game ahead of Buffalo in their division.  How good they are is still an open question.

As for the third unbeaten team, they’re the New York Giants, and they’ve yet to play their third game.  They do so tonight in the Jersey swamp against the Cooper Rush-led Dallas Cowboys.  They are unbeaten, but they’ve won their games by an average of two points.  A national Monday night audience, including their former Super Bowl-winning quarterback Eli Manning, will watch this prime time test tonight, with Daniel Jones and his maligned, perceptually aloof receiving corps including Kenny Golladay and Kadarious Toney hoping to prove they’re even worthy of being discussed any further as an upper-tier team. 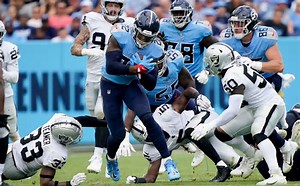 And at the other end of the spectrum, the Las Vegas Raiders are the league’s only 0-3 team, and they arguably aren’t all that bad.  They’ve lost their three games by an average of 4.3 points, yesterday’s 24-22 loss in Tennessee to a Titans team that also came into yesterday’s game winless a series of close calls similar to those that saw them give away their home opener last week against Arizona.  They got a more than credible performance from the game-time decision play of running back Josh Jacobs, and Davonte Adams looks just as good as advertised when he connects with his former Fresno State quarterback Derek Carr.

Selfishly, I’m happy because I have both of these Raiders on one of my fantasy teams, and they helped me get a much-needed rebound win,  That league mirrors the NFL, with only one of 12 teams unbeaten and only one winless.

And my other team, the Culver City Kitties, has somehow defied the odds and has gone unbeaten to date, and I’m only one of two in this 12-team league with that record.  My formula:  Two Eagles receivers and the Dolphins defense.  I’m feeling pretty good about that team.

And the NFL is feeling even better about the prospects for a highly competitive season, as it’s pretty clear that to make any sweeping predictions at this point would be folly.

My advice is to emulate the behaviors that those with Sunday sauce and bruschetta have often displayed:  just get comfy and enjoy the pleasure.   There’s still a lot of season left.