Maxing An Opportunity To Be Winners

It was far and away the most anticipated game of the night that transpired at Truist Field in suburban Atlanta  yesterday, the first of 15 showdowns between the top two teams in the National League East, the New York Mets and the Braves.  To say these are rivals would be an understatement.  Since division play began in 1969 and the Mets swept the the then-Western Division residing Braves in the first-ever NLCS, these teams have been intertwined as foes, all the more so since the Braves relocated to the East in the mid-90s.

More often than not, the Braves somehow managed to win the majority of those subsequent showdowns of significance.  The 1999 NLCS for starters, despite the Mets avoiding a sweep via the Robin Ventura “grand slam single”.  The majority of the next decade plus when the Braves were in the midst of 14 consecutive NL East titles–heck, the Mets didn’t even win the division in 2000 when they went to the Subway Series; Atlanta did.  Chipper Jones dominating the Mets, particularly as a visitor in the stadium he named his son Shea after. 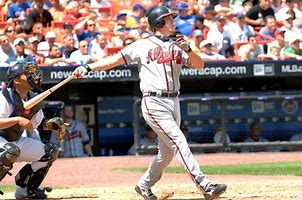 And, of course, last year, where despite being in first place for 100 days the Braves’ roaring post All-Star Game pace, buoyed by the several shrewd trades they made, saw them roar past the Mets for yet another title and, ultimately, their first World Championship since 1995.

So it’s understandable that as they headed into the first of three that will be snuck in before next week’s All-Star festivities that Mets fans were more than a tad nervous.  The Braves have gone 29-8 since they were 10.5 games behind in May, while the Mets have struggled with injuries and occasional bad efforts, the most recent being in their getaway game on Sunday where they were shut out by Sandy Alcantara and the Marlins 2-0 in extra innings and lost starters James McCann and Starling Marte to injuries in the process.  THeir division lead down to 1.5 games, they faced the prospect of losing their lead before they escape Atlanta tomorrow night.

All of this set up perhaps the ideal sitaution for their expensive off-season acquisition, Max Scherzer, to shine.  Recently returned from injury, he was cast in what was billed as a battle of Maxes against the Braves’ young ace Max Fried, he of the San Fernando Valley temple legacy and, more recently, a 9-2 mark this season.

And did Scherzer ever deliver.

Let the brilliant Anthony DiComo of MLB.com take over from here:

The lone blight on Max Scherzer’s evening was still in the recent past on Monday when Eddie Rosario stepped to the plate with two outs in seventh. Standing on second base was Marcell Ozuna, who represented the tying run. Back in the dugout was Austin Riley, who had homered off Scherzer moments earlier. All around the Mets’ ace, a sold-out Truist Park crowd thundered as loudly as it could.

Scherzer ignored it and went to work, jumping ahead of Rosario in the count. He wasted an 0-2 pitch and then came back with his silencer: an 88-mph cutter that caused Rosario to fly open and swing wildly at the baseball. When Rosario did, Scherzer whirled and slammed his fist toward the ground, letting out an audible roar of emotion.

He knew how important this game was, not just in the standings but for his ascending club’s psyche. He understood how significant it would be for the Mets to complete what became a 4-1 win over the Braves. 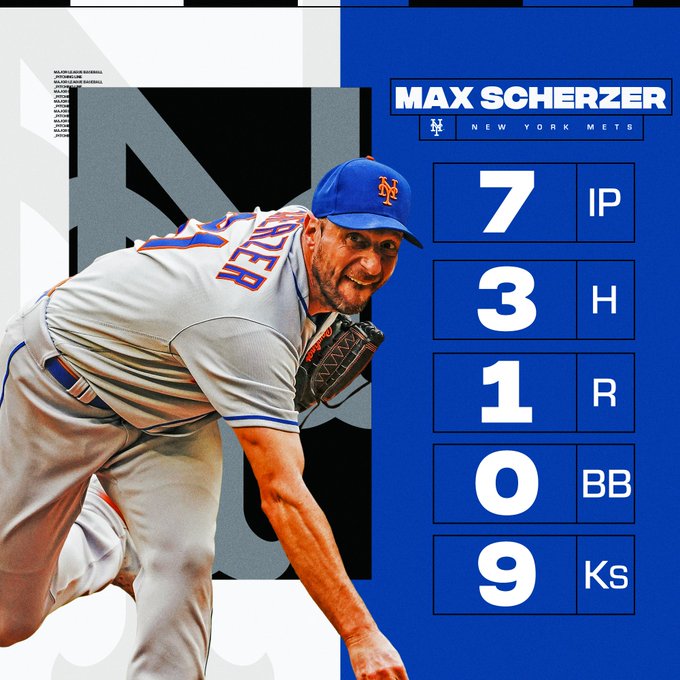 DiComo continued:
And while a single victory in this head-to-head matchup won’t do much to decide the division, Scherzer called it “a measuring stick win” for a reason: It sent a message that the Mets will be a season-long force in this division race.
“Nights like tonight, facing a really good team on the road with an atmosphere that’s conducive for the home team, he’s a difference-maker,” manager Buck Showalter said of Scherzer. “It’s another reminder that when a pitcher is on top of his game, they win. And Max was on top of his game.”
During last season’ s collapse, the Mets did not have the leadership, experience and talent of either Scherzer or Showalter.  Luis Rojas was simply ill-prepared for such pressure, and Scherzer was too busy in Los Angeles securing some signficant wins for the Dodgers during his rental at Chavez Ravine.  Bear in mind that the Braves eliminated the Dodgers en route to their title, so it’s not as if Scherzer doesn’t have his own recent axe to grind, either.
In the petri dish that last night’s series opener set up, Scherzer was, pure as simple, Max-nificent.
The Mets may yet collapse; they may even still lose this series.  They may indeed not be in first place when the season breaks Sunday night.  But they won’t leave Atlanta this time not being on top, and Scherzer’s performance will serve as a stern reminder that 2022 might, just might, be a slightly different script.
With so many other division races already out of hand, and with the jockeying involving the new third wild card in each league involving pretenders in a manner that has served as a false narrative in the NFL in recent years for post-season consequence, the NL East battle for supremacy will likely be the most closely watched in the second half.  Two long-time rivals, intertwined again.
But this time, it may just be the Mets who Max out.
Courage…