The middle of February 2022 may go down in history as the peak of professional football’s renaissance in the city of Los Angeles.  The Super Bowl was back in town for the first time in 29 years, and this time with one of the combatants representing the city, only the second time in the game’s history that had happened (details, details, the Bucs pulled it off in Tampa just a year earlier).

The NFL celebrated with several NFL Experiences all through Los Angeles to allow mere mortals like myself to get caught up in the excitement, much of it free of charge.  One of the better ones I went to was a daylong experience at an outdoor mall near the beach in Santa Monica, where not only was Rams swag abounding but the Chargers were also present, with several players and cheerleaders on site and selling the upside of a season that narrowly missed a playoff berth of their own, a strong rookie season from quarterback Justin Herbert, an exciting young head coach in Brandon Staley and some honest excitement that redoubled the joy that Rams fans were experiencing.

A mere six years after the NFL rediscovered LA after a 21-year absence, with a Sisyphusian pursuit of franchises to service the second-largest media market finally paying off with the return of the Rams from their self-imposed St. Louis exile and the Chargers to the city they began their life in, leaving for the solo status of San Diego a year later.  Blue and gold, in different hues depending upon allegiance, abounded.  Los Angeles loves winners, so you seemingly couldn’t walk a block without encounterin someone wearing something.

Yesterday may have officially ended the honeymoon phase of this reunion.  The Rams, playing an Arizona Cardinals division foe they had beaten 11 of 12 times under coaching genius Sean McVay, were already saddled with playing a backup quarterback, John Wohlford, in place of Matthew Stafford (still in concussion protocol).  And before game’s end, MVP receiver Cooper Kupp would also go down with an injury as well.  The Cards weren’t much healthier, with Colt McCoy spelling Kyler Murray at QB, but they were good enough to send the Rams down to their third consecutive loss, their fourth home loss in six games, and a solid last place in the NFC West as they crossed the halfway point of their “title defense”. Implosion would be an understatement to describe this season so far.  The Rams look confused and McVay looks more and more like he’s regretting turning down the kind of offer Tom Brady eventually took from FOX.  Instead of having a chance to be the modern John Madden–leaving the sidelines early and potentially enjoying a lucrative life as a media darling going out on top–he now appears to be on a trajectory to follow in Jon Gruden’s path.  Gruden hung on to his job in Tampa for seven seasons after winning his championship in 2002 before he finally settled into his comfortable life at ESPN.  It’s understandable that McVay wouldn’t want to be where Gruden is in life today, but the fact that he didn’t take the chance to not follow his path from two decades ago may now be a source of regret.

As for the Chargers, their 22-16 loss to the 49ers started out encouragingly, with LA holding onto a six-point halftime lead in Santa Clara.  But things then went from decent to worse, as the Los Angeles Times’ Jeff Miller chronicled:

After opening a 16-10 halftime lead, the Chargers were shut out the rest of the night. They ran only 19 plays for 52 yards and three first downs over the final two quarters. 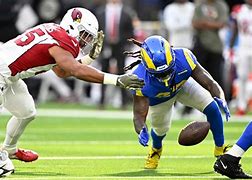 Quarterback Justin Herbert was seven for 14 for 35 yards with one interception after halftime. The Chargers’ final first down came in the last two minutes of the third quarter on a Herbert sneak.

“That’s a good defense,” Staley said. “We just couldn’t get anything going in the run game. In the passing game, it was tight. The rush was coming. There wasn’t a lot of air in the second and third level to take advantage of.”

Right tackle Trey Pipkins III was questionable for the game because of a knee sprain and was unable to play.

Then, in the first half, the Chargers lost starting tight end Gerald Everett because of a groin injury.

On paper, things aren’t quite as bleak just yet for the Chargers as they are for their landlords.  They’re 5-4, two games behind the first-place Chiefs in the AFC West and get to host them at SoFi Stadium this coming Sunday night in a second consecutive primetime matchup.  They are on the cusp of a playoff berth, albeit tenously.  But they enter their showdown as an underdog, and with the knowledge that an awful lot of Chiefs fans will be in attendance.  They travel well under any circumstances, and it’s gonna be a lot nicer taligating at SoFi than it would be outside Kansas City this time of year.  That “red wave” feared last week politically may very well be in evidence in Inglewood football-wise.

And it’s not like much else is going well in LA professional sports these days anyway,  The Lakers are horrible, the Clippers are mediocre and, while the Kings are competitive, there aren’t all that many who care.  So perhaps if Herbert and the Chargers can get it together, there could be something positive yet.   Frankly, with some of my other favorite NFL teams doing inexplicably well, my attention’s already diverted.

We’ll see if Lost Angeles’ attention can be found at all.