LMU Revives Memories By Zigging When Others Zag

You may need to forgive many who forget Los Angeles has other Division I college basketball teams besides the ones that play (for the moment) in the Pac 12.  Many are scattered through the suburbs and exurbs, including many smaller UC campuses where the sport is competitive, but hardly a priority.    Among the others, perhaps the one with the most notoriety is Loyola Marymount, but even that program’s prominence has been dormant of late.

I grew up vaguely familiar with the school, seeing it in agate type only in the latest tabloid editions listed as Los Angeles Loyola or Loyola (CA)., so as to separare it from Chicago Loyola (Loyola, IL) or Baltimore Loyola (Loyola Maryland) or even the smaller school New Orleans Loyola (Loyola, LA; which is, of course, not be confused with the Loyola that is in the other LA.) Many more fans will remember the 1989-90 team that captured a nation’s heart and compassion with a remarkable run to the Elite Eight, with an unparalled offense orchestrated by its coach, Paul Westhead, who a decade earlier had delivered LA with its first NBA championship in eight years by winning as a rookie coach with Jerry Buss’ first Lakers team, led by some guy named Magic.  But what made that team so memorable was the untimely death of its hulking center Hank Gathers, who collapsed and died on his home Gersten Pavilion court during the second round game of his conference tournament.  The Lions forged ahead and won the tournament nonetheless, led by guard Bo Kimble, who played the Gale Sayers to Gathers’ Brian Piccolo and forever earned empathy by insisting that he shoot every first free throw of every ensuing game with his left hand, a la Gathers, even though he is right-handed.

Since then, LMU had largely languished in obscurity.  They haven’t made the NCAAs since, while those other Loyolas did  They play in a Los Angeles area historically named Westchester, which is a name better known in New York and the home of Rick Pitino (and, once, Jim Valvano)’s Iona Gaels.   And since 1991, they have not been able to beat the West Coast conference standardbearer, the Zags of Gonzga University. on their Spokane-based home court.

The biggest shocker of the week — if not longer — in college basketball transpired in the Pacific Northwest on Thursday night when Loyola Marymount upset No. 6 Gonzaga 68-67 at The Kennel. An upset of this magnitude means streaks and droughts galore got detonated in Spokane, Washington.

Gonzaga entered the evening with the longest home winning streak in men’s Division I basketball. The NCAA officially recognized it to be 76 games, though the streak was 75 in a row at The Kennel, Gonzaga’s on-campus home venue. Earlier this season, Gonzaga beat Kentucky at nearby Spokane Arena, thus contributing +1 to the streak, which is now kaput.

The Lions, who were 16.5-point underdogs, ended a 32-year drought of futility on Gonzaga’s campus. Their last win at GU came in 1991, when LMU was on the descent from its peak as a program in the late ’80s. LMU also snapped a 25-game overall losing streak to the Zags; its last win in this series came on Feb. 18, 2010, at LMU.

And with the win, the Lions are building a legitimate case for at least consideration for a post-season bid, at least the NIT.  A road win against a top conference team, and a home game rematch with the Zags looming ahead on February 16th are reasons to get excited about this LMU team.  That game will be carried on national TV as the NBA heads into its all-star break and after the Super Bowl.  20 wins is within reach as well, and that will help its national prominence, too. 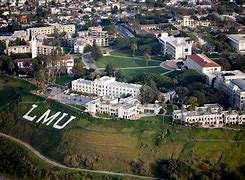 And that home game, while it will be still played on the same Gersten Pavilion court they’ve called home since the 80s, will occur on an expanded campus that technically now situates the school in the tony Playa Vista neighborhood, otherwise known as Silicon Beach,  Local offices of Google, Microsoft and other major tech companies are adjacent to the campus, though many sit empty between WFH and recent layoffs.

Then again, many of those latte lovers are now within walking distance of the beautiful campus, and can see some top flight basketball while they collect their paycheck or severances.

And last night gave them more of a reason to consider it.