Let’s Win It For Dauber

One of the more enduring sitcoms of the 1990s was COACH, initially set around the life of a college football coach played by Craig T. Nelson that was set at a “fictitious” college called Minnesota State.  At the time, the state of Minnesota was one of only a handful that did not have a state university campus that used the state as part of the public name for the school, so the ABC audience (and, likely, many of its executives) was likely not aware that there was indeed a Minnesota state university system.

Most of the 4-year schools are located in smaller cities located in even colder and more Northern outposts than the Twin-Cities, such as Bemidji, Winona, St. Cloud and Moorhead (insert joke here).  Also on that list is Mankato, a slightly larger city that actually had a television station and a hockey team that competed on the Division I level.

At the time that COACH aired on ABC, the school was known as Mankato State, so comparisons were sporadic at best.  When the show ceased production in 1997 and went into reruns it was one of the least successful comedies in rerun syndication and quickly faded into obscurity.  One belief as to why was that show was heavily dependent upon male viewers to get an audience in prime time, which were less likely to watch TV in the early evening time slots where the reruns tended to be scheduled.  Indeed, when the show’s later seasons saw a plot shift that took the show away from Minnesota State and moved the principles to a fictitious NFL expansion team in Orlando the show was scheduled adjacent to Monday Night Football–except on the West Coast, where time zone issues had the show being scheduled at odd late night or weekend hours and effectively doomed its chances for success.  The very plot connection that ABC hoped would work ultimately backfired.

So the name Minnesota State was available and in 1998 Mankato State rebranded itself as such.  And they’ve been a very good hockey team, even being seeded number one in the 2015 tournament before a first-round upset by RIT.  Last night, however, in their first Division I Frozen Four, they pulled off a convincing 5-1 win over the University of Minnesota, of all schools.  Put in perspective, that’s like South Carolina State beating South Carolina in women’s basketball.   They will play Denver University for the title on Saturday night, unfortunately in a year where the tournament is being held in Boston and not a single Eastern school qualified for it.

Mike Hastings may not be Hayden Fox, but he’s won over 400 games and recently signed a five-year contract to continue coaching. 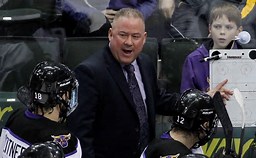 And the real Minnesota State teams are the Mavericks, not the Screaming Eagles.  And although the TV show was set around football, its creator, Barry Kemp, is a raging hockey fan, a native of Iowa, a longtime season ticket holder for the Los Angeles Kings and so rabid he once owned a minor league team, the Long Beach Ice Dogs, who played in a decrepit arena in downtown Long Beach that he filled by giving out free tickets to anyone who wanted who worked on the Universal lot.

Hastings and the Mavericks have assistant coaches, but probably none as colorful as Fox’s loyal ally, Dauber Dybinsky, played hilariously by actor Bill Fagerbakke during the show’s run.  If you recognize the name, these days your kids might know as the voice of Patrick Star on his new Nickelodeons spin-off of SpongeBob SquarePants.

Here’s a thought to inject some national interest in the title game.  Invite Fagerbakke and Kemp to the game.  Heck, invite Craig T. as well (Jerry Van Dyke, who played Luther, is sadly gone and Shelley Fabares, who played Fox’s reporter girlfriend Christine has battled chronic illness for years).  NBC tried to bring the show back in 2015; they indeed ordered 13 of them.  The pilot tested horribly.   It was set ostensibly around Fox’s son and continued to be about football.  Why not have his grandson enroll at the REAL Minnesota State and play hockey in a building named for his dad and explore the emotions of having to live up to expectations?  Make it the Bel Air of 2023?

Oh right, no one would believe Minnesota State could win a championship.

I do.  Go Mavericks.  Win it for Dauber!!  And especially win it for yourselves.