King Of The Jungles

You thought it was a lion that ruled the animal kingdom?  Not when it comes to the NFL. 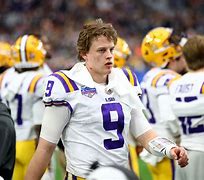 And when it comes to the star of the best-in-class among those named for the species, specifically Joe Burrow of the Cincinnati Bengals, there’s precedence.  Given that Burrow won the 2020 national championship and Heisman Trophy with the LSU Tigers, it was serendiptous that his professional career seems destined to be with a team also named for a big cat, and in the state where he grew up and, briefly, toiled as the quarterback for the Ohio State Buckeyes.  Not a cat, so it was destined not to work out.

And yesterday afternoon, ventuing into hostile and frigid territory at snow and emotion-filled Highmark Stadium in Buffalo, Burrow played his way into his second consecutive AFC Championship game with a surgically methodoical 27-10 conquest of the Bills that, while heartbreaking to Bills Nation, was unequivocably stellar and drew comparisons to another quarterback who has tormented the team, as well an ex-coach.   As Hayden Bird of Boston.com reported this morning:

Reflecting on Burrow’s display, former NFL coach Rex Ryan (now an ESPN analyst) compared Burrow to Tom Brady during a “Get Up!” segment on Monday morning.

“When I look at Joe Burrow, he has the charisma of [Joe] Namath, all right?” said Ryan, as transcribed by NESN’s Adam London. “And if he doesn’t remind you of Tom Brady — I went against Tom Brady 100 times, got beat 99 times. That’s who that sucker reminds me of.”

“Great players elevate the play of all of their teammates,” Ryan continued. “Well, he does that, but you know who else he elevated? Everybody else in his building. This is a once-in-a-lifetime player. He came to Cincinnati in great circumstances — a perfect player for that franchise. He’s amazing. Tom Brady did the same darn thing in New England. So to me, that’s who this guy is. Good luck. Everybody’s going to have to face this cat for the next million years. I don’t know if he’ll get six Super Bowls, but he’s gonna get a bunch of them.”

Well, Burrow isn’t quite up to Brady’s numbers just yet, but he’s made it to the Final Four in two of his first three years, so he’s on track to do as well or better.  Last year, he thrillingly upended a healthier Pat Mahomes and the Chiefs to make it to Super Bowl LVI as a sophomore, where he had a fourth quarter in a de facto Los Angeles Rams home game before Matthew Stafford engineered a late touchdown drive.  Yes, the same Stafford that played for the LIONS.  So one might say the outcome was predestined by Darwinian law.

Should Burrow and the Bengals stop a more hobbled Mahomes this coming Sunday in Kansas City, their reward is another trip to a warm-weather destination for Super Bowl LVII, where his opponent will be fellow sophomore Jalen Hurts and his Eagles or the even more unlikely quarterback of the San Francisco 49ers, Brock Purdy.  The Eagles are favored as the home team, and Hurts has demonstrated flashes of brilliance akin to Burrow’s before he suffered a late-season injury.  But he looked more than fine in dismantling the Giants on Saturday night.

But yet, he’s still a bird.  And you know what happens to birds when they go up against jungle cats.