College baseball has arguably never more been in demand nor has it commanded more attention from media companies.  With traditional professional minor leagues truncating and the need to develop talent ever greater, there’s nary a day between mid-February and mid-May where several live games are airing at any time of the afternoon or evening across multiple time zones on ESPN+ as well as many regional sports networks, with less competition from professional bushes than ever.  While the sport still has strongwer followings and, typically, more pro prospects in the South and West, improved faciltiies, drainage and opportunity have brought less temperate regions of the country, including many otherwise big name schools, into closer alignment with the rest of the country,

Since just after World War II, each season (save for 2020) culminates in a pilgrimage literally to the middle of America–Omaha, Nebraska, where the uniquely formatted College World Series is held.  Unlike professional playoffs, or even the single-eliminations of other sports’ championships, the CWS is a double-elmination format where championship and consolation brackets are immediately created from after its eight participants square off in openiong match-ups.  From that point forward, at least one team is playing for its season, and it assures that would would otherwise be completed in a couple of days. 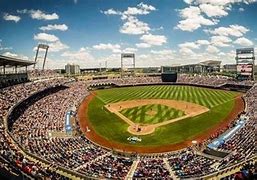 Since 1999, the road to Omaha has emulated basketball by offering bids to 64 teams.  Opening weekend now emulates the CWS in a more compact version, with 16 four-team tournaments occurring at the top seeds’ home fields.  Typically, one other strong regional team is invited for geographic proximity, and often teams from across the country and in smaller conferences round out the field.  Cinderella upsets like in basketball don’t happen often, but when a Binghamton State can at least play on the same field as the likes North Carolina or Tennessee, that’s noteworthy. 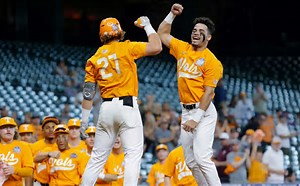 The current format sees 16 tournaments over the first weekend post-Memorial Day, well after most classes have ended.  Doubleheaders are assured for Friday and Saturday, lacking an outrught sweep a third occurs Sunday and, if at least two teams haven’t lost twice, a championship game on Monday.  So at least for one day, there’s the single-elimination showdowns that make March Madness, well, mad.

Now add rain delays and hurricane season into the mix.  Inevitably, this produces extra-long days, lots of opportunties for fans to drink (soda, of course) and further tension.  Because of strict rules that insist that these first rounds be completed by the end of Monday (save for extreme weather issues), there have frequently been situations where teams could clinch in a delayed game early in the morning, lose, and then face ellimination in the second game of a doubleheader they had no idea would be played until a few hours earlier.

That didn’t happen this year, but this elimination Monday did produce eleven games, including one suspended from the night before.  Action started at noon Eastern, and in all likelihood will extend through past midnight tomorrow.  Mainstream ESPN channels resembled DirecTV mixes, simultaneously airing multiple games that made an otherwise slow game as dizzying an array for the screen as could be. 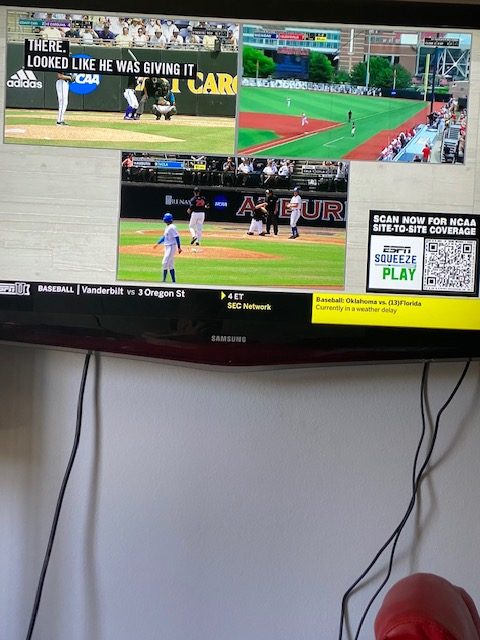 If baseball is the soundtrack of summer for the masses, college baseball playoffs is the white noise for the nerds like me.  By the close of play today 16 teams will move on to “Super Regionals” in eight on-campus locations, with more traditional best-of-three series scheduled, half of which are slated for a Friday-Sunday arc and the other half for a Satuday-Monday arc.  Again, rain can wreak havoc with, meaning a Super Elimination Monday next week has the potential to be just as busy.

The major league schedule tends to be light on Mondays anyway, so there’s not even as much competiiton in prime time.  No NBA finals, either, at least this week.  So this is as good a day as any to set the remote. get on a treadmill, and check out some good old-fashioned pressure cooker baseball with recognizable nicknames and (at least now) unfamiliar players.

Remember, they’re playing for a trip to Nebraska in early summer.  You gotta love the game that much to get so excited.  Fortunately, I do.