Judge-ment Day Is Nigh

With the Yankees’ start to this season rivaling their then-record pace of 116 wins and a world championship in 1998, it’s an apropos time to note that they will be facing a monumental decision at year’s end on wheher or not to reward Aaron Judge, their Redwood-like center fielder who is currently leading major league baseball with 24 home runs, a pace that is rivaling another Yankee legend, Roger Maris’ 61 homers in ’61.

Judge is arguably the franchise’s most prolific and popular home-grown player since Derek Jeter, and on this team he is arguably even more relatively prolific and popular. His #99 jersey is the team’s best seller, his “All Rise” fan club prominent in the Yankee Stadium bleachers, and at an imposing 6’7″, 282 poundsis perhaps the team’s most imposing physical presence since the heyday of Mickey Mantle in the mid-50s.  Indeed, given his power and posiition he is arguably more comparable to Mantle than Jeter.

Judge was seeking a long-term contract this winter as he headed into the final year of his contract.  His management was seeking compensation in the neighborhood of Mookie Betts and Bryce Harper, or even the Marlins’ commitment to Judge’s current fellow lumberjack teammate Giancarlo Stanton.  At least a decade in length, north of $30M a year.  The Yankees reportedly offered a seven-year deal at roughly $30M a year, which they considered generous given Judge’s relatively advanced age (30) and his injury-plagued history.  While he played in 148 games last season, one where the Yankees sbuck into a one-game post-season where they were shut out by their arch-rival Red Sox, it was only the second time in his first five seasons he played in more than 70 per cent of their games.

Certainly, his relative value as a home run machine, particularly in a year where offensive production overall has declined prescipitously, is significant.   And the relationship between player and club is seemingly less strained than the one Jeter and the Yankees had when he was coming of a 10-year, $189M deal in that took him through the oughts, one that he was rewarded with after leading the team to four World Series titles in his first six seasons–exactly the career point that Judge is at now.   But at that point Jeter was four years younger and had already delivered championships, something Judge has yet to do. 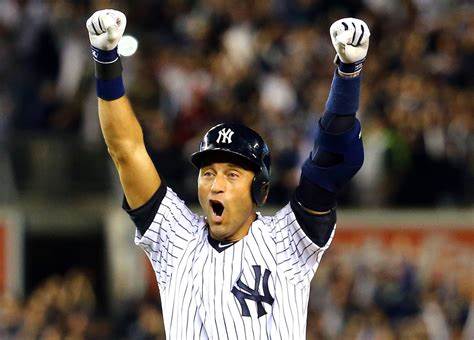 While Jeter remained the face of the franchise, and arguably baseball, through the length of his contract, second only to teammate Alex Rodriguez in total value, he (and A-Rod) only produced one additional world championship.  After some tense negotiations following a disappointing 2010 post-season where the Yankees lost their chance to defend their title in a disappointing ALCS loss that saw the Texas Rangers advance to their first World Series, Jeter eventually agreed to stay with the Yankees with a shorter-term three-year deal at a somewhat reduced annual salary.  While he did collect his 3000th hit during the next three seasons, the Yankees were eliminated in two consecutive seasons by the Detroit Tigers, and Jeter’s final post-season series in 2012 was aborted by a devastating ankle injury.

So it’s understandable why the Yankees are hesitant to commit long-term to Judge, particularly in a climate where the separation between the white-hot passion of George Sterinbrenner and the more controlled, calculated style of his son Hal has grown in time and Cashman is forced to adjust to his demands, as well as an ever-evolving sport.  In effect, while Judge bet on his own upside, they pushed him and his team to do so with their indecisiveness.

While it’s only a partial season, their MUTUAL success so far strongly suggests this might be an opportunistic time for the team to, quietly, eat crow and be prepared to pay up.  Even with diminished production, Jeter’s value to the franchise as a leader and, economically, as a driver of merchandise sales and media sponsorships he more than justified the team’s investment.  The Yankees were in the playoffs for all but one of those seasons during Jeter’s 10-year deal (that exception coincided with the final season of the old Yankee Stadium, which drove attendance in any event) , and they successfully launched the YES network at the outset.  They’ve now extended YES’ reach to streaming via its app and Amazon Prime Video, which assures they are more than set for growth in the coming years.  Judge and the team’s assault on all-time records will undoubetedly drive adoption this season alone.

Besides, there are more than enough options for Judge to go elsewhere where his desired salary could be paid.  There are the San Francisco Giants, near his Fresno hometown, where Barry Bonds thrived in the later stages of his career–how many homers he hit may have been as a result of steriods, but he was unquestionably a presence in that ballpark.  There are the Phillies, who have shown a proclivity to load up on bats similar to Judge’s with even worse physical histories, who now seem to at least have found the ability to be productive.  And–G-d forbid for Yankees fans–Steve Cohen and the Mets have the financial chops to keep him in the same city, and with all due respect to Mark Canha he’s older and far less marketable.

Judge has made it clear that no official deal will be signed during the season, but there’s nothing stopping the team from at least planning to meet whatever the marketplace will bear at season’s end.  Judge certainly could hint he’s open a reversal of his stance, but so far has chosen not to.  He’s betting on himself again, just like he did in spring training.  So far, he’s won that bet.  But the poker game isn’t quite over, and there is certainly a chance he could indeed be injured, and at 8.5 games their division lead, while tidy at the moment, is not insurmountable with roughly 100 still to play.

History suggests the Yankees overpaid for Jeter in the back half of his career, but there was little question that when they made the deal they knew it would pay out eventually, and as we’ve said in the big picture it did.  Judge has the potential to be BOTH Jeter and Mantle, and possibly break many of their team records in the process.  They might be forced to eat a few millions down the road, but it would still go down easier than the decades of crow they will gorge on if they can’t keep him in the Bronx.

This gavel comes down in favor of #99.  Both today and tomorrow.