And to those of you who like me don’t speak a lick of Japanese, that translates to Opening Night.

As this is being written, it is indeed dark out, but it’s pre-dawn in Los Angeles, where a live NBA game is airing on NBA TV, and where for the first time in three years the league’s defending champions are kicking off the pre-season in a world thousands of miles away but as fertile a ground to sell jerseys and merch as any North American city.

The Golden State Warriors have trekked halfway across the world to kick off the 2022-23 season less than three months after they reclaimed their title.  Arguably the world’s most popular player, Steph Curry, did indeed play tonight.  But as this is being written, he’s gone a mere 1 for 7 from the field and scored a total of six points.  And as the game is evolving, like most early pre-season games in any sport it’s turning into an audition for role players, and in this case many that will be playing in Santa Cruz in the G League.  So if nothing else they got a memorable trip and a chance to wear the uniform of the world champions. 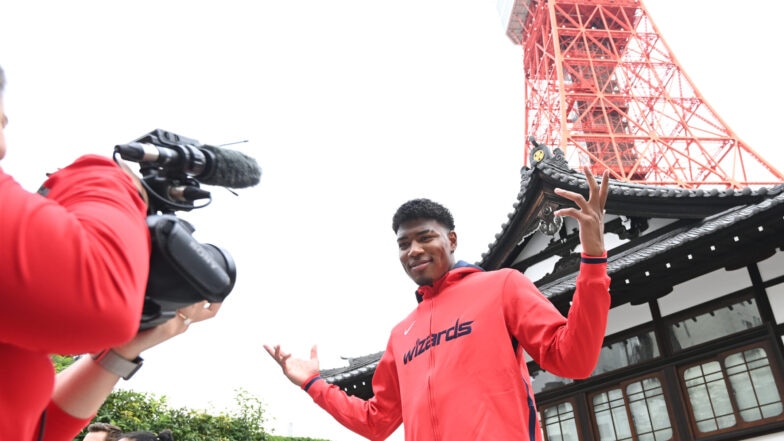 But in Tokyo tonight, for as popular as Curry may be, the Washington Wizards are arguably the more beloved team, if for no other reason they feature one of the league’s few Japanese players–and the first ever selected in the first round of the NBA draft–in Rui Hachimura.  The Wizards, in their silver anniversary season with their non-ammunition nickname, are hardly one of the league’s more popular or successful franchises.  But Hachimura is one of the team’s bright spots, and is actually a better threat to hit a three-point shot than Curry.  Last season, he ranked #2 behind the Clippers’ Luke Kennard in 3PT FG% (among players with at least 100 attempts).  He hasn’t hit one tonight so far, though, but he has drawn the loudest cheers, and is leading the Wizards with 13 points early in the fourth quarter as this is being written.

The idea of live basketball in the middle of the night in September may appear ludicrous to all but the most ardent fans.  As someone who literally kept his sanity during the earliest days of the pandemic watching live professional baseball from Korea at a similar time of day, though, it’s a nice reminder of sports’ global popularity.  And considering how little sleep I’m getting these days for a variety of nerve-rattling reasons, it’s a remarkably effective calmative.  And a nice remindet that yet again, against sometimes overwhelming odds, we’ve all made it to yet another season.

By the time you read this, the game will have ended.  Very few people will care about the final score and whether Hashimura, Curry or perhaps Johnny Davis winds up the “hero”.  There’s nearly a month ahead before any of this really counts.

But for me, and a whole bunch of exuberant fans in Tokyo where it’s a rocking Friday night at the moment, this is indeed a Kaimakusen to remember.