The Steelers and Raiders will meet in a December game in Pittsburgh tonight, fifty years and a day after they met in what was Pittsburgh’s first playoff game in a quarter-century and only the second in the franchise’s then 39-year history.

And, tragically, three days after the hero of that game, Franco Harris, passed away at age 72.   Three days before his #32 is being retired on Christmas Eve.  As a thank you from a storied franchise and impassioned fan base that, thanks to his alertness and, perhaps, a tad of divine intervention, the best Christmas present they had ever known in their lifetimes.  The first-ever Steelers post-season victory.

Hours before his untimely demise, Harris told a captivated Chris Russo on his Sirius XM broadcast Tuesday how, in his view, it all happened:  As David Lopez of CNN.com reported:

Harris said his assignment was to block but he wound up going out for a pass when the fourth-down play broke down with 22 seconds left in the game.

“You know what, when I watch the film I can’t remember anything of the play past just leaving the backfield,” Harris told host Christopher “Mad Dog” Russo. “But when I see the film, and I see it in real time, it just blows my mind how quick that is … And I have no idea how I reacted so quickly, and got it and kept in stride. And even looked up a little bit to try and get the lay of the land … I’m saying, ‘How did all that happen in just those few seconds?’ It didn’t make any sense. Like, I just don’t understand it.”

Russo noted Harris was “a long way away from where the ball ricocheted.” If another Steeler had touched the ball, Harris’ catch would not have been legal.

Looking at the film, Harris says, “I’m thinking that it could only have been” Raiders defender Jack Tatum “that the ball bounced off of” before Harris made the shoestring catch. Tatum had collided with Steelers fullback Frenchy Fuqua.

Frenchy Fuqua piqued my interest in the Steelers in the first place.

New York pro football in the ’70s was, for the most part, mediocre at best.  The Giants were mildly competitive in ’72, in what turned out to be their last season at the original Yankee Stadium, finishing 8-6 but failed to make the post-season.  The Jets were no better, going 7-7 and seeing their playoff hopes extinguished in a Monday night loss to the Raiders in the penultimate week.  I didn’t like the Raiders then, so I was drawn to the Steelers by that alone.  Fuqua had been acquired from the Giants that season, and I liked him, so I was sold.

So as my dad and I settled in on our slipcovered couch in our poorly heated apartment watching our grainy 19 inch color TV, we were rooting modestly for Pittsburgh in a defensive battle that had the Raiders up 7-6, via a 30-yard touchdown run by quarterback Ken Stabler with 1:17 remaining that erased two earlier Roy Gerela field goals.  The Steelers’ last-gasp drive went nowhere, leaving them with a fourth and 10 with 22 seconds to go.

It’s best we let Harris take over the narrative:

“So, things didn’t go too well on those first three plays, as you know. And then it gets down to fourth down. A long way to go. 22 seconds.

And I go into the huddle and I tell myself, ‘Franco, this will probably be the last play of the season. It was a good season. Just play it till the end.’

And (the coach) called that 66 halfback option.”

Harris’ assignment was to stay in and block.

He recalled that “there wasn’t much … adrenaline” in the huddle.

We were winning the whole game and right at the end (the Raiders) scored. It seemed more of a letdown than anything.”

Russo noted that Harris “did block well” on the play and noticed that quarterback Terry Bradshaw was scrambling under pressure from the defense.

“My thought was to release to be an outlet pass,” Harris said. “And Bradshaw, being as, you know, big and as strong as he is, you know, guys trying to bring him down, he’s able to fight them off and get the ball into the air.”

Harris said that was his instinct because that was what he was taught as a running back in college, under Joe Paterno at Penn State University. 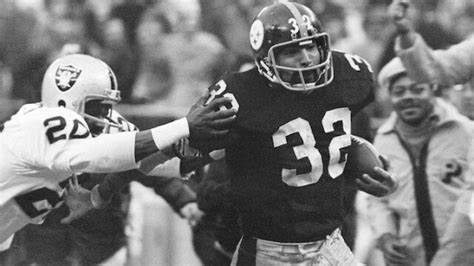 “That’s what Joe preached to us all four years at Penn State. You know, always go to the ball … And so I start taking some steps to the ball and I remember nothing after that… which blows my mind, that I have no visual, no recollection of anything until I am stiff arming (Raiders defender) Jimmy Warren, going into the end zone.”

So there you go.  There actually was a play in the playbook, as well as instinct on Harris’ part that had been honed at a college less than 138 miles away.

There are many words that can be accurately used to describe the Reception, voted in 2019 as the greatest single play in NFL history.  In hindsight, “Immaculate” may not the most appropriate.

For one, I think the biggest little word that this play invokes is “If”.  Because what if other results besides the one that unfolded occurred:

— Had the Raiders stopped the Steelers and won with that last-minute touchdown, they may have beaten the then-unbeaten Miami Dolphins in the following week’s AFC Championship game.  No undefeated season.

— Had Jack Tatum, an emotional player going back to his days at Ohio State, not been the one called out for not making the pick on the Terry Bradshaw pass, he may not have been energized for revenge for the balance of his career, one that he ultimately chronicled in an autobiography called “They Call Me Assassin”.  Maybe he isn’t as motivated to make a pre-season play on New England receiver Darryl Stingley that left him paralyzed for the rest of his life.  Maybe Stingley would have lived longer.

— Had Jimmy Warren tackled Harris, it would have merely set up Gerela for a potential game-winning field goal.  Then the play is remembered fondly, to be sure, but we’re not calling it the greatest play in NFL history decades later.

The shocking win did not exactly derail the Raiders.  Indeed, the following December, with home field advantage, they throttled the Steelers 33-14 for a revenge win.  They met in each of the three ensuing post-seasons.  Each time, the winner of their game won the Super Bowl.

One play, no matter how memorable it was, did not define a career. nor did it etch each franchise’s fate in stone.

But considering how Harris played for the balance of his career, one that saw him rush for over 12,000 yards, lead the team to four Super Bowl triumphs and be selected to nine consecutive Pro Bowls in his first nine seasons, we’re probably still retiring his jersey tonight in any event.

While his is best remembered for that play, he should not be forgotten because of the thousands more that followed.

This year’s Steelers aren’t all that good.  They’re a disappointing 6-8, same record as the Raiders, and looking at the possibility of a losing record for head coach Mike Tomlin for the first time in his career.  Mitch Trubisky at quarterback is a compromise at best.  The Raiders are fresh off an improbable victory of their own, courtesy of Jakobi Meyers’ feeble attempt to lateral in a tie game.  They clearly have momentum.

But on a frigid Pittsburgh night where #32 will be retired, with Harris now having a view from heaven,  I would not bet one red cent on the Raiders’ chances tonight.  I might live to eat those words, but yoy and double yoy, that’s why they play the game.