Today, three decades after he played his last major league baseball game and more than 35 years removed from his seminal moment as a New York Met, Keith Hernandez will have his #17 retired by the team.  Kudos to Steven Cohen, the Mets’ richest fanboi in their history who just happens to now be the team’s owner, and is making it a personal mission to honor the many heroes of the past who previous management had ignored for so long.

If you’re a fan, you know the importance of Hernandez’ acquisition to the legacy of the 1986 World Championship team.  When the Mets were able to extract him from the St. Louis Cardinals on June 15, 1983 in exchange for their closer Neil Allen, as well as Rick Ownbey, it was perhaps the first sign of life from a franchise that had fallen into disrepair since their shocking one-month sprint in 1973 that got them to within one game of their second World Championship in five seasons.  Though they had righted one wrong by reacquiring Tom Seaver at the start of the year, the 39-year-old version that they got was a shadow of the version they excommunicated to Cincinnati exactly six years prior to the Hernandez trade, and they were headed for yet another last place finish.

For Hernandez, who the year prior had helped the Cardinals win a World Series, it was a hellacious fall from supremacy to the cellar.  Coupled with the temptations of early 80s New York City, it likely drove him to a few regrettable cocaine binges–to his credit, in later life he’s all but owned up to that reality.  And the team somehow let Seaver go again at season’s end.  But they did have a young phenom working his way through the minor leagues named Dwight Gooden, and his manager by season’s end was Davey Johnson, who like Keith was a hard-nosed, mustached infielder driven by toughness and resolve. 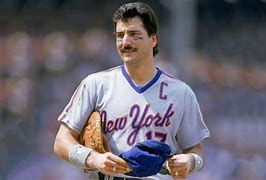 Hernandez not only chose to stick around, he took a leadership role on a team otherwise populated by a core of young, talented but troubled overachievers.  He was eventually rewarded with the title of Captain.  While his statistics during his seven seasons at Shea were admirable–a nearly .300 average and six Gold Gloves at first base–his contributions extended far beyond the field.  And his matinee idol looks didn’t hurt him, either.  If you were a male fan you wished you were him; if you were a female fan you wished he was inside you. 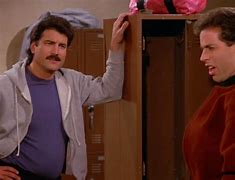 This degree of idolotry was brilliantly immortalized in a two-part SEINFELD episode called “The Boyfriend” at the end of the show’s third season.  Seinfeld, an unapologetic Mets fan, cast the recently retired Hernandez as himself in a two-pronged plot that has him emerge as someone who captures Elaine’s heart for a spell (at least enough to get to first base!) and who is confronted by an overagitated duo of Newman and Kramer for allegedly spitting on them after Newman expressed his frustration for ruining their otherwise perfect June 14, 1987 day by committing two late errors and having them lose to the hated Phillies.  In what can only be described as comic brilliance, Seinfeld then used this as a jumping off point to satirize the recent movie hit JFK and played out the scenario his friends accused Keith of in a similar fashion to how the Zabruder film was analyzed in the movie.  The reaction of the studio audience–not to mention the actors on stage who could barely contain their laughter–to the punch line “That was one magic loogie” was memorable.  As Seinfeld himself would later say, that episode. and the reaction and ratings it got, was arguably what cemented its path toward becoming a massive hit and a billion dollar franchise that still gets laughs to this day.

That enduring popularity took Hernandez to the broadcast booth, and to this generation he is part of the SNY broadcast trio that features his equally good-looking teammate from the ’86 team, Ron Darling, and longtime fanboi broadcaster Gary Cohen.  Night after night, the chemistry between this trio is best in class among broadcasting teams, with Hernandez contributing insights as both a former player and now an elder statesman.  He is the perfect mix of counsel and curmedgeon and, much like Phil Rizzuto or Paul O’Neill have done on Yankees telecasts have allowed an entirely new generation to appreciate not only what they’re doing today but the relevance of what they did yesterday.  The fact that this 2022 team is in first place today (but watch out, cuz here come the damn Braves again) makes tonight’s ceremony that much more of a celebration.

As we know, I’ll likely never be attractive or desirable enough for a pretty brunette who likes athletes to allow me to get to even first base, a position Keith lorded over for years.  But I do know that I fall into the category of someone who will forever wish he could.  So yes, I’ll be watching today, and I’ll be cheering loudly, albeit remotely.