If You Haven’t Yet, Say Hey

When Willie Mays was still hitting lots of home runs as an active major league baseball player, I was hitting a lot myself on the bulletin board at Queens Valley School.

In a nod to the nearby Mets who were just beginning their Amazing era that eventually produced their unlikely World’s Championship, my school library developed a contest for our grade where anyone who read four books in a month would get their name on a large baseball-shaped construction paper cutout and posted over a cartoonish green felt background with a baseball diamond drawn on it.   For every book above four, you got an additional smaller ball stapled on top of it. 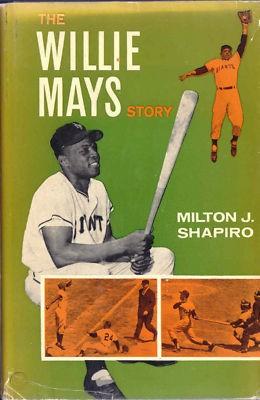 Thanks to the fact that my library had a lot of sports books, I had a lot of balls on that board.  And because the librarian actually counted just the number of signouts, and not necessarily the name of the book we read, I reread a lot of the ones I liked.  The one I recall rereading the most frequently was THE WILLIE MAYS STORY, published in January, 1960 and written by Milton J. Shapiro.

So I’ve known a lot about Mays’ early days for a long, long time, and as a young fan I followed his later career on my own.  I knew about his rookie season in 1951, where he started out poorly and begged his manager to send him back to Triple A, where he was hitting a mere .481 before his recall.  “Please, Mr. Leo!!  Please send me back to Minneapolis!!” is a quote I can still directly quote decades later.

I knew about his spectacular season in 1954 where the Giants came out of nowhere to win their final World Championship in their New York history, capped off by the impossible back-to-home plate catch off Cleveland’s Vic Wertz to snuff out a rally and help the Giants to a sweep of a 111-win team that was so devastating to that franchise, they didn’t make it back to the Series in more than four decades.

And I knew that when Mays was traded back to New York by the Giants as a 41-year-old in 1972, a promise that Mets owner Joan Payson, a longtime Giants fan who personally promised Mays that, when the time was right, she’d find a way to get him back to New York.  And on May 14, in his first game as a Met, he hit what proved to be the game-winning home run off relief pitcher Don Carrithers of–you, guessed it, the Giants. 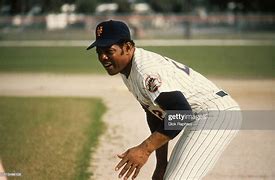 And I knew that, after a tearful retirement ceremony in the final home game of the following season, when the Mets finally accomplished a worst-to-first turnaround to take over the National League Eastern Division lead within a month and implausibly reached the World Series with the worst regular season record of any champion before or since, what proved to be the final hit of his prolific career was a 12th inning single that won a game in–you guessed it–the Bay Area.

What I didn’t know, until the stellar HBO Sports documentary SAY HEY, WILLIE MAYS!! premiered this week, was how much the Bay Area despised him as a person while at the same time worshipping him as a talent.  While he was winning MVPs and leading a team dominated by stars of African-American and Latin descent, he was often denied the chance to buy a house.

And with the likes of storytellers like Colin Hanks and Nelson George attached, and with Mays, bless us, still with us at age 91, I also learned a few new things about exactly why, even all these decades later, he is still an undeniably significant part of baseball–nay, U.S.–history, and, arguably, with Hank Aaron’s recent passing the greatest living baseball player of all.  As MLB.com’s David Adler reported last month when the film premiered in (of course) New York:

“Willie Mays is one of the greatest athletes of the 20th century, full stop,” George said at a screening of the film in New York City last month. “You’ve got Ali, you’ve got Jordan … well, Willie Mays is in that discussion. The film is partly a way to reintroduce him to this newer generation.”

Particularly since apparently the previous one didn’t do all that great a job of fully appreciating him.

Yes, even Willie Mays was mocked despite his success.  And I learned we had more in common than I had realized lo so long ago when I avidly read about his career.

Many of the other kids in school were none too happy about my omnipresence on that bulletin board.  Many mocked me for loving sports too much, some even physically attacked me.  But that’s a topic for another day and, probably, a long couch.

Yesterday, I had the chance to tell some of this to a new, young friend who is an avid baseball fan, unlike many of his generation lately.  He was planning to watch this film this weekend and asked me what I knew.

So I shared some of this with him directly, such as Willie Mays did with these filmmakers.  And although his age has prevented him from in-person appearances of late, he is getting the attention he has longed deserve while he’s still around to know about it.  This past summer, the Mets joined the Giants in retiring his #24, as much for his accomplishments to New York baseball in general as his brief tenure as a player, and later a coach, with the Mets provided.

I also shared with him what I had learned from some of his post-career handlers that he was no saint.  The challenges he had in finding a neighborhood to accept him and his young family accelerated his divorce from his first wife.  Different ownership groups of the Mets and Giants didn’t embrace him as well as those in place during his career.  He eventually chose to work for an Atlantic City-based casino, and was suspended from baseball for a spell.  Fortunately, he now enjoys a positive relationship with both teams, and as you can see from the image from the movie he is quite pleased at that turn of events.

As was I that someone far younger than me got to learn about why he mattered so much to me, and should to even this generation.

I sure hope those of you who didn’t already know about all of this may watch this movie, which will migrate shortly to HBO Max, and perhaps be motivated to read some more about him.  The Shapiro book, BTW, can be found on Amazon for $3, which is less than I paid the Queens Valley School library in overdue book charges back in the day.

That price tag’s out of my league right now.  Maybe it’s within yours.  It would make a great holiday gift for anyone who likes to read.  And I promise not to compete with you in any contest that rewards it.