For about ten minutes last night, as the sellout crowd still straggled into SoFi Stadium trying to dry off from what the Inglewood Chamber of Commerce could only see as their worst nightmare for climate, the College Football Championship game was, well, a game.

When TCU held Georgia to a field goal on their second drive and then saw their quarterback Max Duggan connect with Derius Davis with a long pass that allowed Duggan to cut the Bulldogs’ lead to 10-7, some people, myself included, thought this game would be competitive, despite the fact that the line for this game had reached as high as 13 points going in, among the largest ever seen by a championship in the quarter-century that one has been held.

From that point on, though, the wheat clearly separated from the chaff.  The Bulldogs then scored the next 55 points unanswered, and cemented their place in college football history.   As Sports Illustrated’s Zach Koons rattled off:

Only one previous CFP game was on the list of the top 10 bowl blowouts: LSU’s defeat of Oklahoma, 63–28, in the 2019 national semifinal at the Peach Bowl.

Apart from the historic margin of victory, Georgia also became the first team in a decade to win back-to-back national championships. Alabama was the last program to claim consecutive titles back in 2011–12.

The Bulldogs struck early and often, coming up with three first-half takeaways and scoring on every drive of the first half to take a 38–7 advantage going into the locker room. The offense racked up 354 yards of offense and averaged 9.3 yards per play through the first two quarters.

The fireworks didn’t stop there for Kirby Smart’s Bulldogs, which kept their foot on the gas for the rest of the evening. By the fourth quarter, Georgia was already leading 52–7, which allowed Smart to pull many of his starters–including quarterback Stetson Bennett–for one last curtain call.
Bennett was simply unstoppable, as the partisan Chuck Carlton of the Dallas Morning News lamented:

The Georgia quarterback finished 18-of-25 for 304 yards to go with four passing touchdowns. The Bulldogs were able to repeatedly exploit mismatches in the secondary. 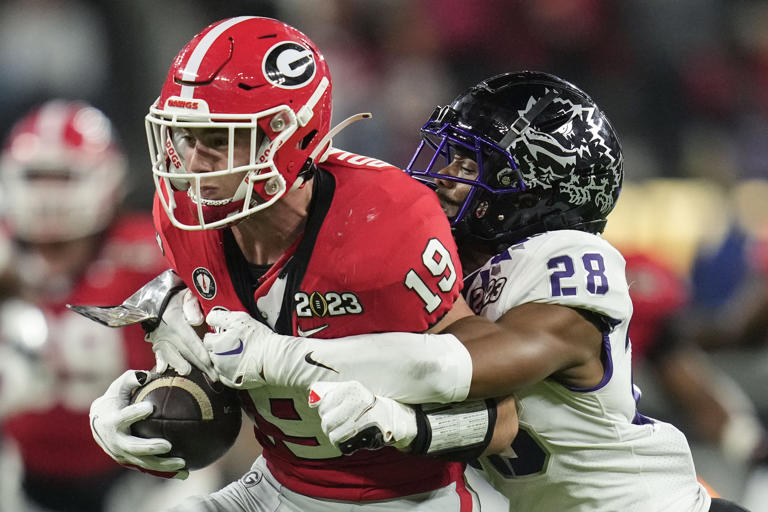 Brock Bowers, the John Mackey Award winner as the nation’s top tight end, was simply too big for TCU defensive backs. He finished with seven catches for 152 yards and a touchdown. Receiver Ladd McConkey added five catches for 88 yards and two touchdowns.

For TCU, merely getting here was historic for them.  Not only was it their first-ever national championship game participation, they did so after finishing under .500 the year before in what has been perceived as the fifth-best of the Power Five conferences, one that bodes to be even worse with the imminent departures of Oklahoma and Texas to Georgia (and Alabama’s) SEC.  The Big XII has seen far better days than those that unfolded this season, and no doubt TCU has (and will) see way better ones than what transpired last night in soggy Southern California. 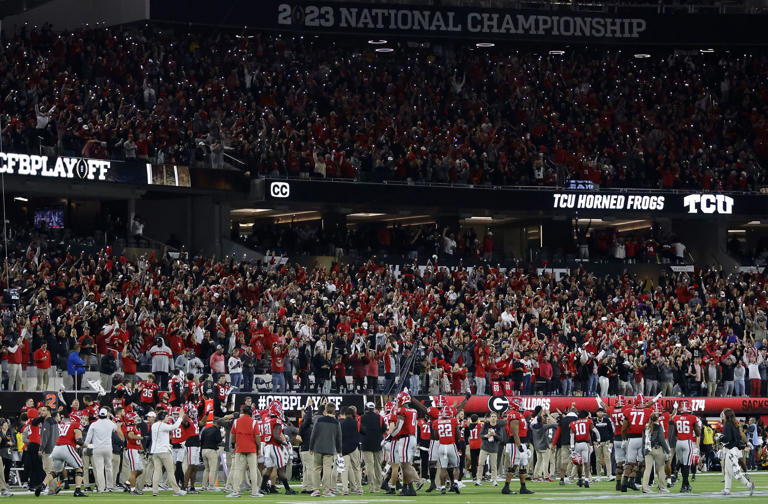 But there is absolutely no doubt who owns the college football world this morning.  This championship game may have been UGA-ly to watch.  But for Dawgs fans, it was absolutely perfect.

Fly safe, y’all.  Next time, we’ll hopefully have better weather for you.