There have been high political tensions surrounding the Qatari World Cup, but before today none had yet impacted the on-field play.  The host Qataris proved to be as feeble with their soccer skills as they are with their respect for women and migrant workers, losing their third consecutive match early this morning and exiting the tournament with nary a whimper.

But soon afterwards, before more than 40,000 in Doha, a winner-take-all match between the USA and Iran unfolded, with both historical and current backdrops indicative that indicated there was both revenge and retribution at stake as well as a trip to the knockout stage.  As Nicholas Reimann of forbes.com noted in his report: 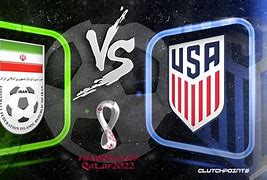 Political controversy also surrounded Tuesday’s match, after U.S. Soccer sparked international outrage by sharing images of the Iranian flag on their social media accounts that scrubbed the Islamic Republic emblem. U.S. Soccer officials initially defended the decision by stating it was a show of support for Iranian protesters who have held massive demonstrations over the September death of a woman in police custody, who was allegedly arrested for improperly wearing a headscarf. U.S. head coach Gregg Berhalter apologized for the move in a Monday news conference, saying the American coaches and players “knew nothing about what was being posted.” Iran filed a formal complaint with FIFA, world soccer’s governing body, prior to the match calling for the U.S. to be expelled from the World Cup.

Add to that the fact that 24 1/2 years earlier, with the U.S. still basking in the afterglow of their surprising run to the elite eight of the first Cup hosted on their soul, the Iranians played spoiler in a 2-1 elimination game in Lyon, France, that sent the U.S. home dejectedly.  On that occasion, in a delicately choreographed pregame ceremony, the Iranian players gifted white roses to their American opponents as a symbol of peace.

This time, much too much was at stake.

Then, as Ronald Blum of Associated Press reported, a new American sports hero was born:

Christian Pulisic gave his body for his country, scoring the goal that advanced the United States in the World Cup while crashing into the goalkeeper.

Pulisic’s 38th-minute goal lifted the U.S. over Iran 1-0 on Tuesday in a politically charged rematch of their famous meeting a quarter-century ago. The American star was replaced at the start of the second half and taken to a hospital for an abdominal scan, the U.S. Soccer Federation said.

Pulisic scored and was sprawled on the field and lying in the goal for about three minutes as he received treatment from the U.S. staff. He tried to continue playing but was substituted and later taken to the hospital.

The U.S. defense held tough through a dramatic second half, Pulisic watching from the hospital, knowing that as the face of American soccer, much of the blame for the U.S. not qualifying at all in 2018 was laid at his feet.  But this effort, on this crucial and emotional a stage, has bought him a mulligan or three that will likely carry him through not only to Saturday’s showdown with The Netherlands, but will likely at least carry through to the qualifying for the 2026 tournament, which will return Cup matches to the U.S. (and elsewhere in North America) back on a summer schedule.

There will be no flowers for Iranis this time around.  The way they’ve been treating women lately isn’t much better than how the Qataris do.

If you were so inclined, send a bouquet to Pulisic with sincere hope to get well, and to thank him for his service.