Hey Little Sister, What Have You Done?

Before last summer, the last time I was fortunate enough to attend the U.S. Open in Flushing Meadow was in the summer of 1997, when I got to spend a humid August afternoon during the earlier rounds wandering the outer courts.  A young African-American teenager was getting some attention, and I was curious about what the hype was about.  That’s when I was able to see Venus Williams, all of 17 at the time, begin her ascent to her first Grand Slam championship. 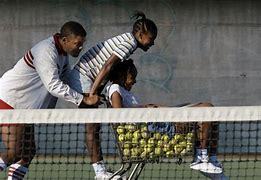 My spouse du jour and I were sitting nearby some much more passionate fans who were also from Los Angeles, and they told us about how Williams had been raised in Compton, by her demanding but loving father/coach who pushed her to overachieve and exploit her natural talents to help lift her family to a better life.  It was a compelling story, one, of course, that was better told in the movie KING RICHARD (who was the guy that played Richard Williams?; forgive me, I’ve kinda blocked it out).

What the more passionate Angeleno said as we watched Venus slice through her older opponent proved to be spot on: “If you think she’s good, she’s got a younger sister who’s a beast”.

Two years later, Flushing Meadow discovered Serena Williams, when she too won an Open not yet legally able to drink.  And she’s never looked back.  She’s added 22 more Grand Slam titles to her impressive resume now spanning two different centuries and four different decades, the most in the “Open” era and one short of Margaret Smith Court’s all-time record.  She’s become a true mogul; per Forbes, she was 2021’s second highest-paid female athlete.  And she’s become a mom, a feat she considers far greater than any of her titles and one she plans to repeat. 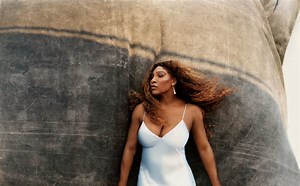 So yesterday’s announcement that after this year’s U.S. Open she will finally hang up her sneakers –timed with the release of a Vogue magazine cover–wasn’t all that surprising.  She plans to devote her time toward her business ventures and her family, and it wouldn’t be surprising if both she and Venus continued to be the face of the game and help transition the focus onto the new generation of emerging stars who are now at the age when they broke out a quarter-century ago.  (Coco Gauff, that means you in particular).

There’s a fantasy world where Serena summons enough strength and resolve to take on the field one last time and tie Court’s all-time record, but even she dismisses that as folly.  Merely showing up will draw an enhanced amount of attention at a time when the sport truly needs ir.

But after overcoming a series of challenges, as she recounted for MSN:

“I went from a C-section to a second pulmonary embolism to a grand slam final. I played while breastfeeding. I played through postpartum depression. But I didn’t get there. Shoulda, woulda, coulda.

“I didn’t show up the way I should have or could have. But I showed up 23 times, and that’s fine. Actually it’s extraordinary. But these days, if I have to choose between building my tennis résumé and building my family, I choose the latter.”

I don’t know too many other humans who could do that.  So we should definitely celebrate her as a legend, a pioneer, an athlete, a woman and a parent all at once.

Hey, Little Sister, Who’s Your Superman? Turns out, it was you all along, girl.