When the Lakers looked to find a third spoke for their Big Three after last year’s playoff disappointment, the consensus was that one off two Los Angeles natives coming off subpar seasons was the best fit.  Both were available in trade,

On the one hand, you had Russell Westbrook, a nine-time NBA All-Star, a UCLA alumnus, but someone without an NBA championship in 14 seasons, the first 11 paralleling the first 11 of the existence of the Oklahoma City Thunder.  One conference championship, which ended in a spectacular flame-out with four consecutive losses to the Miami Heat despite having home court advantage initially.

On the other hand, you had DeMar DeRozan, with only five All-Star game appearances in 13 NBA seasons, the first decade spent in relative obscurity as a Toronto Raptor and a USC alumnus.  Zero NBA finals appearances.

LeBron, Maverick, Pelinka and the Lakers chose the guy with a few more All-Star games and that vast Finals experience.  They couldn’t even make the Top 20 in a 30-team league this year.

DeRozan was traded to the Chicago Bulls, which at the time looked like a losing proposition.  The Bulls have had some modest success relative to some trying times, mostly due to the All-Star efforts of yet another UCLA alumnus, Zach Levine.  Last summer, they decided that they would at least try to build around Levine.  Besides DeRozan, they took a flyer on Lonzo Ball, yet another ex-Bruin and had the opportunity to land Alex Caruso, defensive stalwart of the bubble champion Lakers as well.

But the real jackpot was hit with DeRozan.  In back-to-back games around the end of 2021, DeRozan hit deep three-point, game-winning buzzer-beaters.  The Bulls were in first place in the Eastern Conference through January.  As the regular season wore down, the team struggled some, and eventually fell to the second tier of playoff qualifiers.  But they did avoid the play-in tournament, drawing current champion Milwaukee in the first round.

DeRozan had a modest Game 1, a Bulls loss.  But in Game 2 in Milwaukee, he got off to a spectacular start and wound up with 41 points and the Bulls staved off a furious Bucks comeback to escape Wisconsin with a 105-101 win and steal home court advantage.  Subsequently, their hopes were further uplifted with the news that 2021 playoff standout Khris Middleton would now be lost to the Bucks for the balance of the series due to an injury. 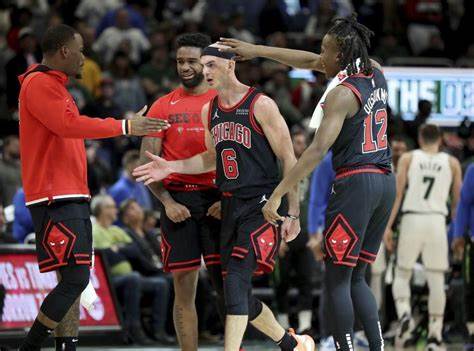 So with a United Center crowd buoyed by size and opportunity, this is DeRozan’s chance to write his own legacy in the arena, much like guys named Jordan and Pippen did a generation ago.  If the Bulls can advance, in a field this open anything is possible going forward.

There’s a long way to go in this series, and I’m not personally going to put down a penny on any series at this point.  But I will be watching, since I do have some emotional skin in the game (That’s for you, KG13). And I know I’m pulling for DeUnderdog.